Brussels, 9 April 2020: The IUC-Asia organised a live video discussion today between its programme pilot cities from Europe and China, as part of the new online series of thematic discussion rounds. On the call from the EU were experts from Barcelona, Granada, Rome, Bologna, Stuttgart, Nice, Mannheim and Greater Manchester. Joining the call from China were officials from Liuzhou (Guangxi Province), who shared their successful approach to minimize the effects of COVID-19 on the local population. In total, over 22 experts discussed concrete cooperation in areas identified in previous visits.

Rudolf Niessler of EU’s DG REGIO began the call by underlining the importance of this kind of online exchange, since the IUC originally planned to have the EU pilot cities visiting China this week, “Instead, we are now meeting here in this virtual space. Regional policy makers from Europe and Asia have been confronted with a previously unknown emergency, which requires a global response. There is an evident need to strengthen the economic, environmental and social resilience of our cities, something at the core of the IUC programme. Mr Niessler referred to the EU support to resilience in Asia for example during the 7th Asia-Pacific Urban Forum in Malaysia in October 2019. Referring to the EU Urban Agenda he quoted that “what we are experiencing now will have far-reaching repercussions for the urban community. Factors like population density and city planning will come under scrutiny. The current pandemic will most likely serve as a catalyst for urban transformation”.

Mr Niessler continued to elaborate on the role of the EU during these trying times, “And it is now that we can show the importance of urban cooperation. The EU has robustly reacted to the current crisis with a corona virus response initiative, totalling € 37 billion. The IUC is now involving over 150 cities globally, elaborating urban cooperation action plans and implementing pilot actions.”

Located in the south of China, Liuzhou is one of the cities currently participating as a pilot city and joined the call today to share its experiences in containing the spread of the COVID-19 virus. According to Mr Wei Lin of Liuzhou’s Municipal Health Commission, there were only 24 cases of infection reported in the city of 4 million inhabitants reported between 23 January – 14 February. Mr Lin described the control and prevention approach taken by Liuzhou in identifying and controlling the source of infection, cutting off the means of transmission, and protecting susceptible people from the virus. Quarantine and treatment were prioritized, and the infected areas were disinfected.

Mr Lin elaborated on their containment approach, “We reduced assembly of large groups and cancelled events. We conduct screenings of people and mobilization of home visits by doctors. We’ve organized forces of volunteers to participate in prevention control of the pandemic, and mobilising people to return to normal life, while promoting a ‘wash your hands’ campaign, and making sure our medical personnel have sufficient PPE. We’ve set up teams of medical, psychological and pandemic experts to work together. We try to be transparent in regard to releasing information about the pandemic to reduce panic. We identify areas according to risk to shape our response strategy.”

Ronald Hall, EU Principal adviser for DG Regional and Urban Policy, commented “Liuzhou’s presentation was superb, a bit like a masterclass in the management of this pandemic and therefore extremely useful for European cities.” In addition to containing the virus, Liuzhou’s automotive plant SAIC-GM Wuling completed a quick production line transformation and is now producing more than a million surgical grade masks per day. Liuzhou has been donating masks to European cities, and the NDRC and government locally in Liuzhou have been working to how to provide more support to European cities. Professor Flavio Rosa from La Sapienza University in Rome expressed his appreciation in having already received a large number of masks from Liuzhou, enabled by the relationship resulting from the IUC-Asia programme.

According to Mr Lin, “We have been paying close attention to what has been happening in Europe. We are looking at how to lend support to European cities. Just as logistics can be trouble for us, we are working with IUC to see how we can solve this. He further noted that they have returned to their industrial production, restaurant and service industry is going back to normal, and work is not seriously affected.

European cities’ representatives then discussed with Liuzhou Government representatives about the concrete pilot projects under development. Mr. WU Wenneng from the Regional Affairs Division at the Development and Reform Commission of Liuzhou referred to the integration of smart city, energy and mobility concepts from Rome, Barcelona, Granada and Stuttgart Regio to the urban development plan of Liudong New District and the North Ecological District. Projects discussed among the experts also included establishing incubation and acceleration programmes for EU and Chinese start-ups among specialized institutions from the pilot cities. Moreover, cities also promote decentralised research, education and training cooperation in areas related to urban development through summer schools on BIM & GIS and training modules for practitioners.

During 2019, European entities from the EU pilot cities signed 13 MoUs with Liuzhou which are now under implementation. The IUC-Asia plans to continue its live video meetings to facilitate mutual learnings between cities in Europe and Asia during the crisis, and to continue its valuable work of cooperation on sustainable urban development. 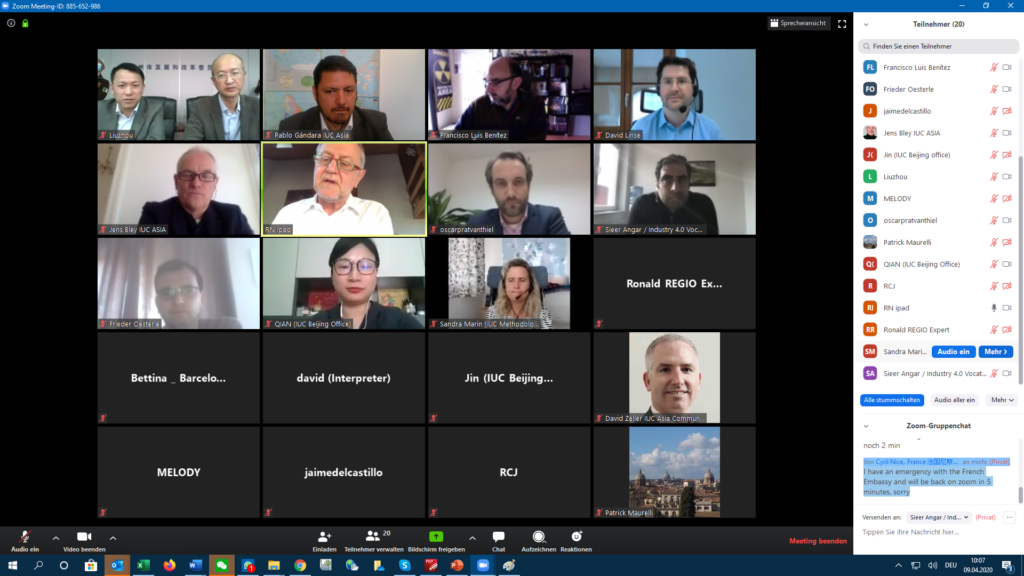 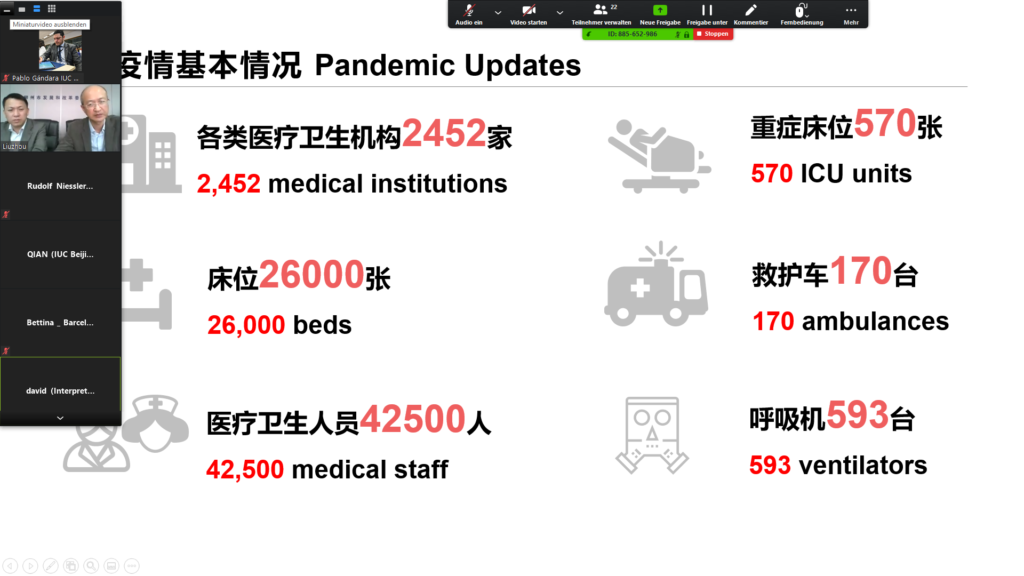 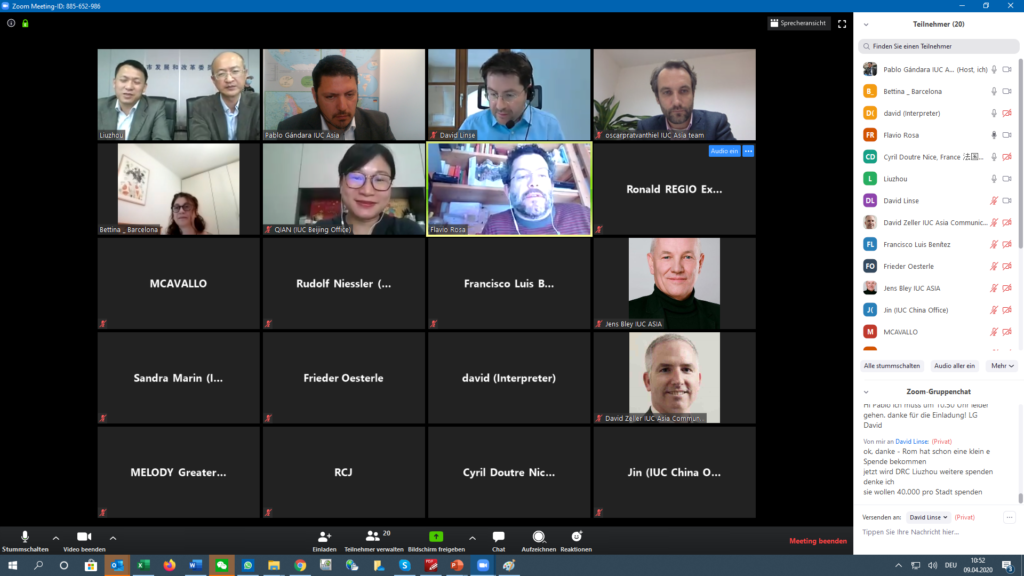 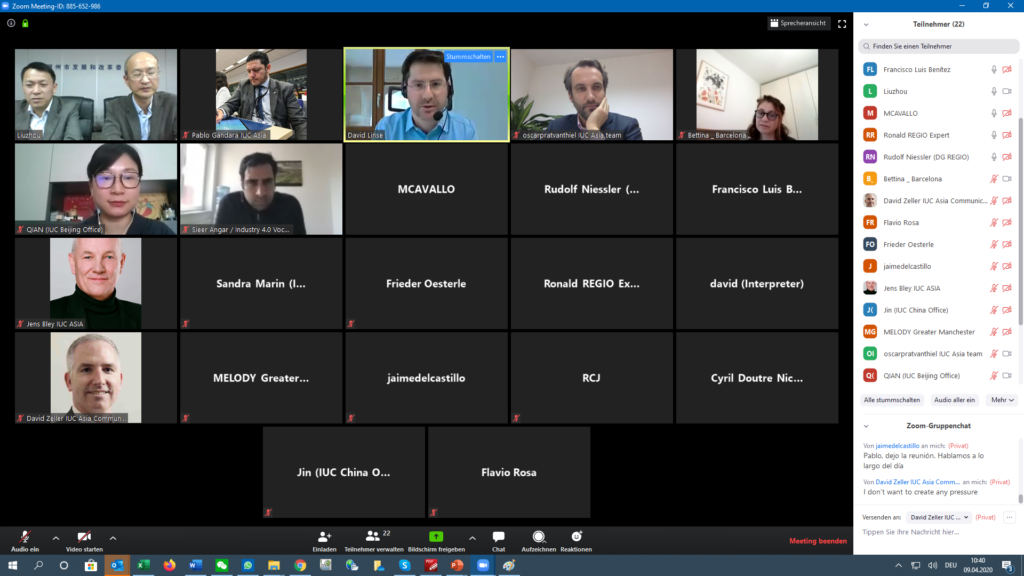 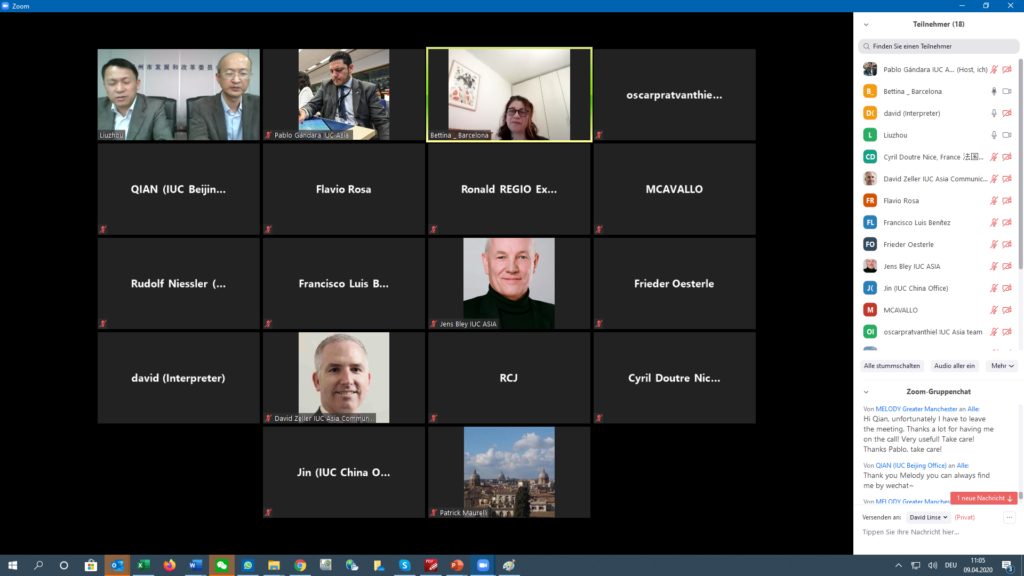 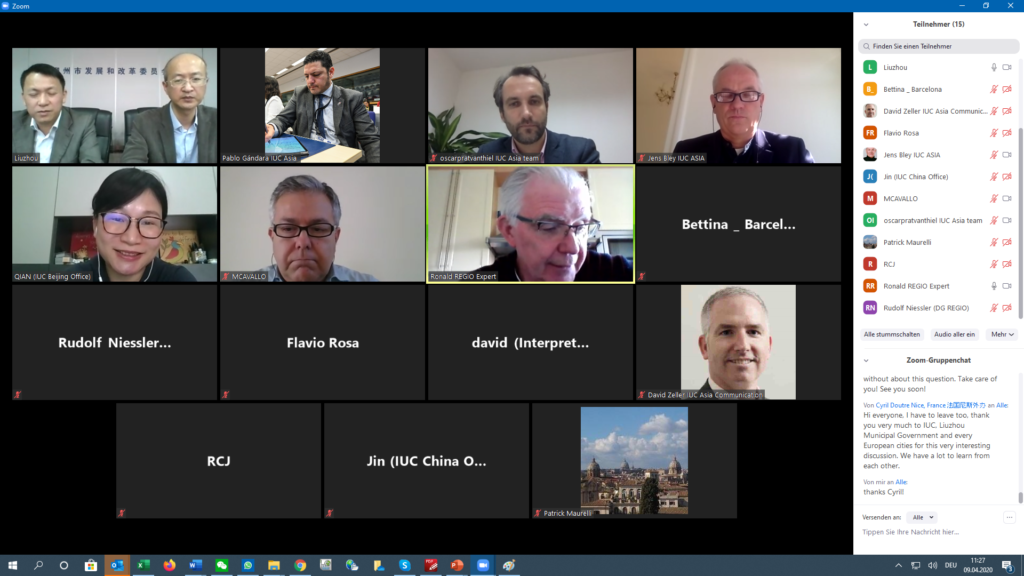