Today, the Directorate-General for Energy of the European Commission (ENER) and the IUC Asia team participated in the 3rd International Forum on Renewable Energy, on the topic of Green Energy and New-Deal Industry of Gwangju and Jeonnam (Gwangju Metropolitan City and Jeonnam Province, Republic of Korea). The hosts of the hybrid online and offline conference were Gwangju Metropolitan City, Jeonnam Province / International Climate & Environment Center (ICEC), Gwangju Jeonnam Institute and Namdo Daily, which covered the event. Since 2017, the IUC project has implemented several training activities on climate action with Gwangju city.

The forum was organized to work on a concrete plan for climate change response and energy demand management at the national level, in accordance with the GHG emission reduction per the 2015 Paris Agreement. Green energy industries, such as energy consumption reduction and management, energy independence, EV, batteries, etc., are emerging as a key new-deal industry to promote local and national economies. Through multilateral discussions among various stakeholders, a direction for green new-deal industries and mid-to-long-term development plans for energy industries are required.

Following the opening ceremony formalities, Dr. Won Tae Yun, President of ICEC, provided an opening statement referring to climate action in times of COVID. He stated that CO2 emissions levels have in fact reached a peak in 2020, which will be the warmest year since monitoring the global temperature. He referred to IPCC reports urging to decrease CO2 emissions to avoid a point of no return. In Gwangju and Jeolla Province, decarbonizing the economy is a challenge – he stated. The potential for renewable energy production in the city and the province is huge – he said.

Dr. Won then introduced keynote speaker, Sébastien Occhipenti, International Relations Officer of the European Commission for DG Energy. Mr. Occhipenti stated that “Our path to climate neutrality by 2050 is irreversible...the goal of the European Green Deal is to build a holistic approach of the clean energy transition. And, this requires unprecedented transformation and it will be the backbone of the green recovery from the COVID-19 crisis...through our Just Transition Mechanism, we will ensure that to ensure that no region is left behind in clean energy transition and mobilise at least EUR 100 billion, through financial support, transition plans, attractive conditions and technical assistance”. Mr Occhipenti further referred to the Strategy for Energy System Integration (unveiled in July 2020 which will links energy sources and infrastructure to support decarbonisation), the EU Clean Hydrogen Strategy (to reduce GHG emissions across industry, transport, power and buildings sectors), the Methane Strategy and the Renewable offshore energy to accelerate the wind capacity foreseen to grow 20-fold. The Commission is further reviewing the Renewable Energy and Energy Efficiency Directive and the TEN-E Regulation (Trans-European Networks-Energy Regulation). While speaking about the cutting emission potentials in the EU, he stated that buildings account for 40% of EU energy consumption and 36% of the greenhouse gas emissions. “Since the construction sector mobilises 10% of EU GDP, a building renovation wave may boost economic recovery in the EU by creating 160 000 green jobs in the construction sector by 2030″ – he said.

Further presentations were made by Yu Jin Lee (President, Local Energy Transition Network) and Chae Joo Moon (President, Energy Valley Industry-University Convergence Agency – EIUCA). Ms. Lee referred to the crucial importance in phasing out coal-fired power plants in order to reach Korea’s goal of net-zero CO2 emissions by 2050. She referred to best practices from the European Union, including Denmark’s high decentralisation of energy generation and the EU’s Carbon Border Adjustment (CBA). She urged Korea to increase the share of renewable energy production – the lowest of all OECD countries, she said – through the pricing system and building public consensus. Mr. Moon focused on the potential of offshore wind parks in Jeolla Province, the importance of a stable distribution grid, and the costs sharing options for onshore and offshore substations.

In the panel discussion with the Korean experts, several areas of Korea’s Green New Deal were discussed, including energy efficiency and smart grids, efforts to produce hydrogen through renewables (green hydrogen) and the need for manufacturing companies to invest in environmentally friendly raw materials. Speaking about Gwangju, Director Son explained that the metropolis aims to become energy independent by 2045 and that artificial intelligence will be crucial to achieving this target. Director Ahn from Joeonamm Province referred to the job creation challenges of the energy transition. They expressed their interest in learning from the EU about ways to compensate for job losses through the just transition mechanism.

Mr. Gándara spoke on Ideas for EU and Korean Cooperation for Implementing the Green Deal. He began with the past work the EU had undertaken in cooperation with Korean cities, referring to the World Cities Project (2017-2018), involving the cities of Busan, Gwangju, Seoul and Suwon. Some highlights of that project were in green deal areas identified between Tampere and Gwangju, such as:

The IUC Team Leader also referenced the ICEC support of the IUC Asia at the APUF-7, the Seventh Asia-Pacific Urban Forum held from 15-17 October 2019 in Penang, Malaysia.

Representatives of the Korean cities and regions attending the meeting showed strong interest in cooperating with European counterparts in areas relevant to renewable energy, especially in promotion schemes for real estate developers and private house owners, green hydrogen, fuel-cells technology as well as in lithium battery development and recycling. Also, energy efficiency was mentioned as one of the key areas for cooperation with European cities or regions. 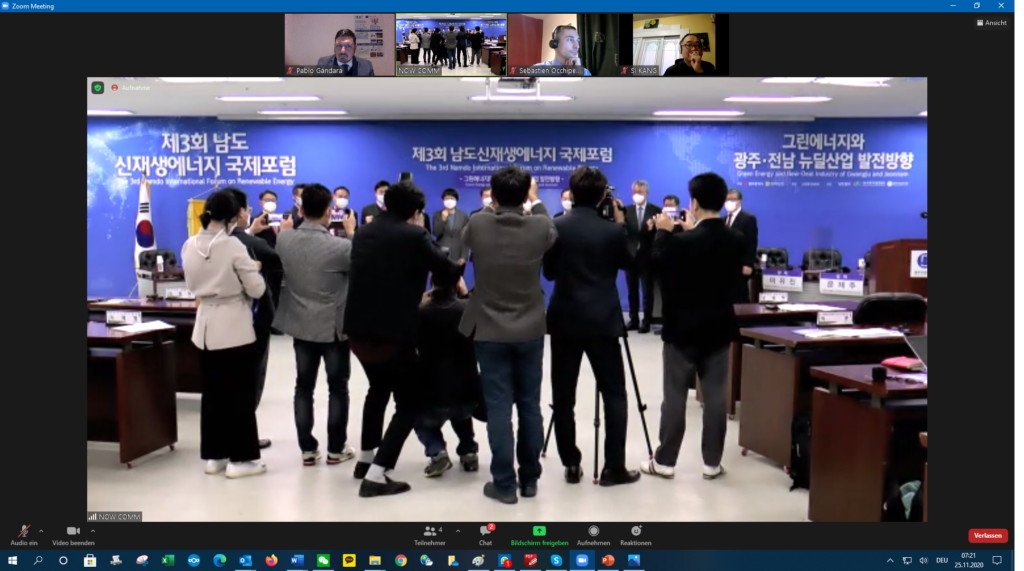 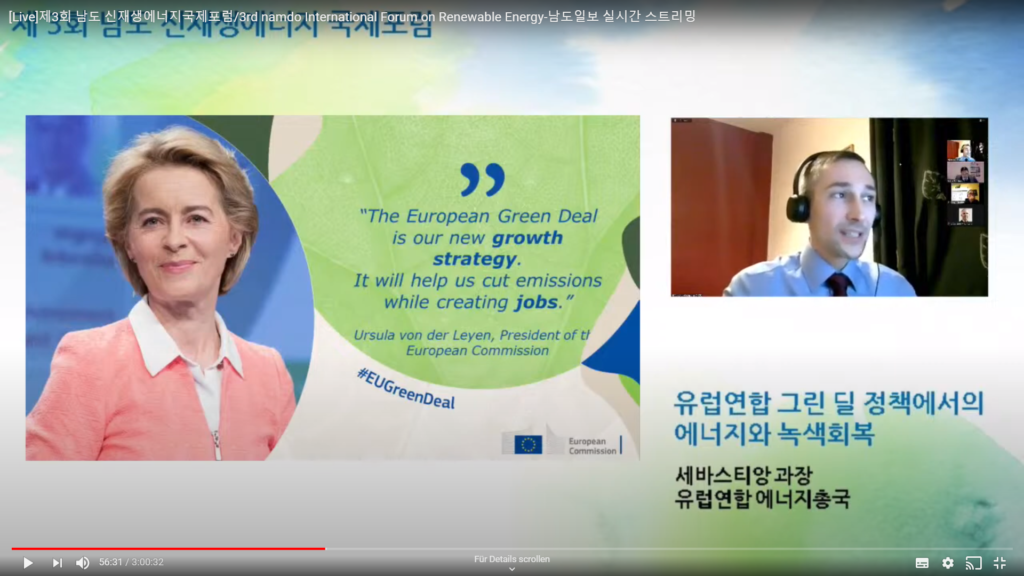 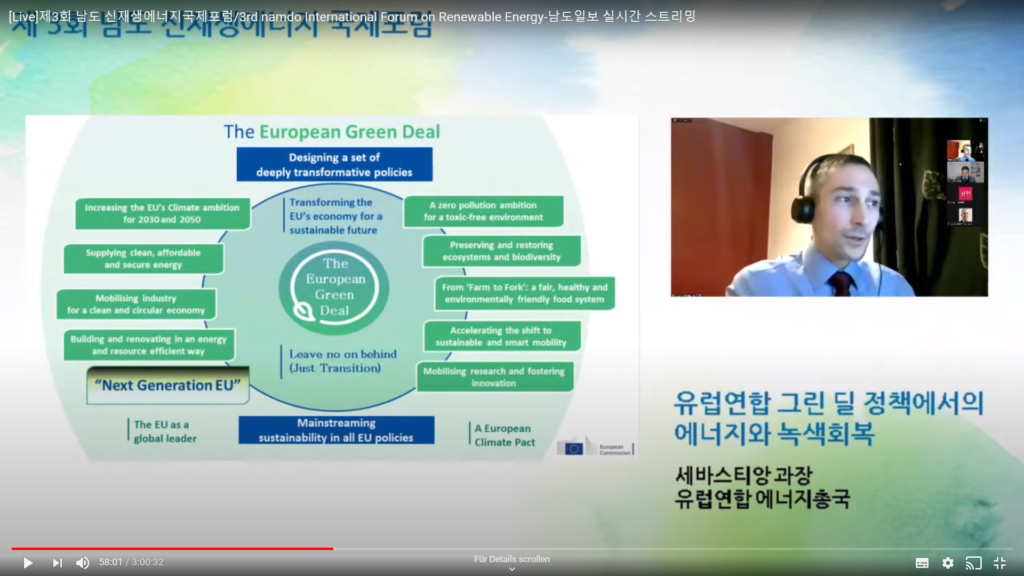 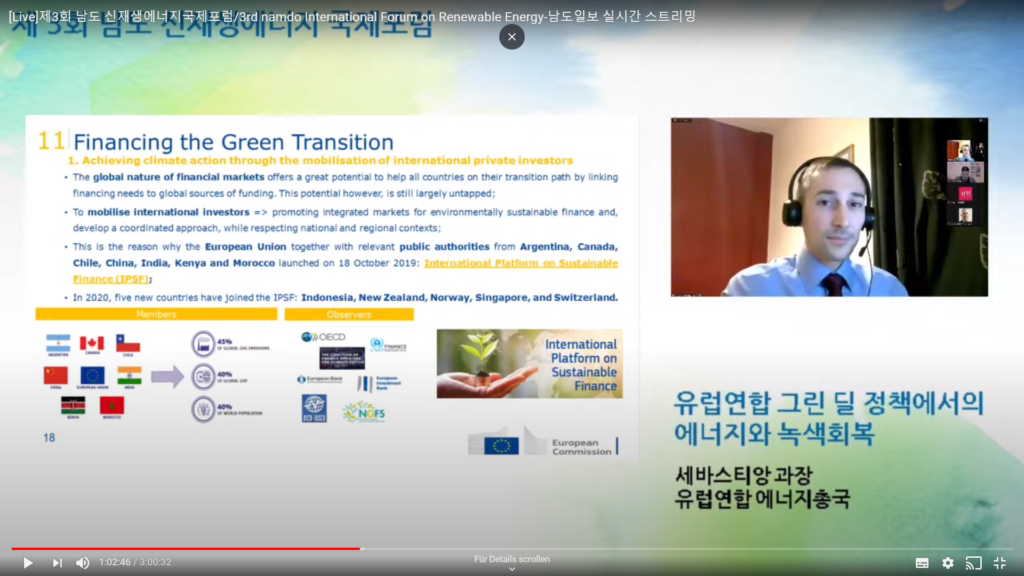 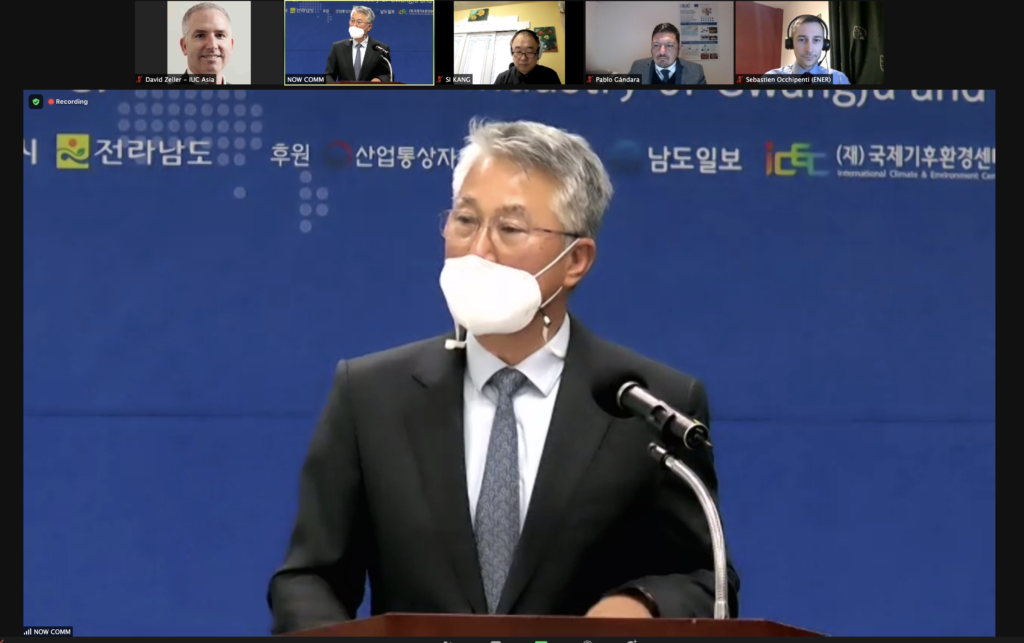 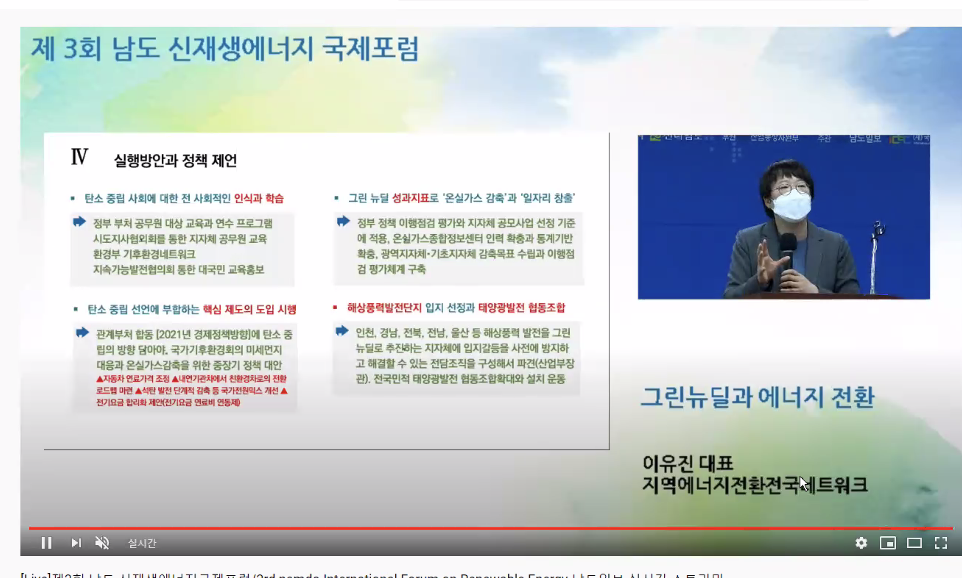 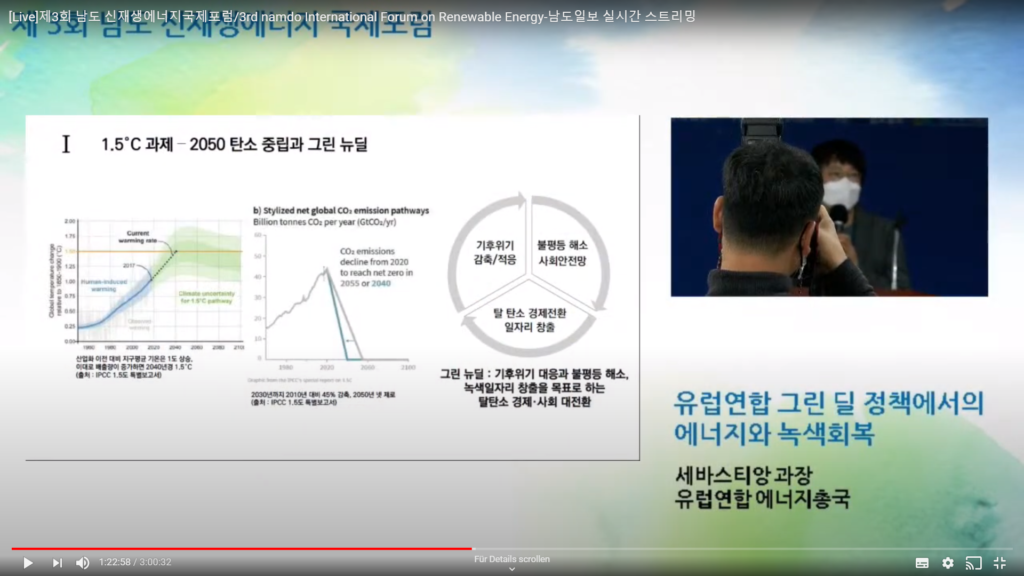 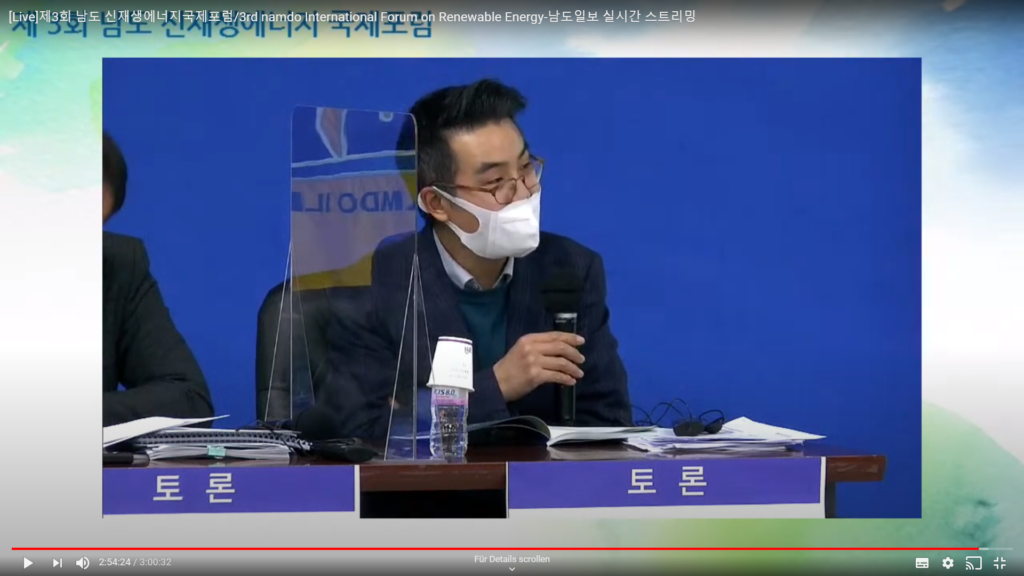 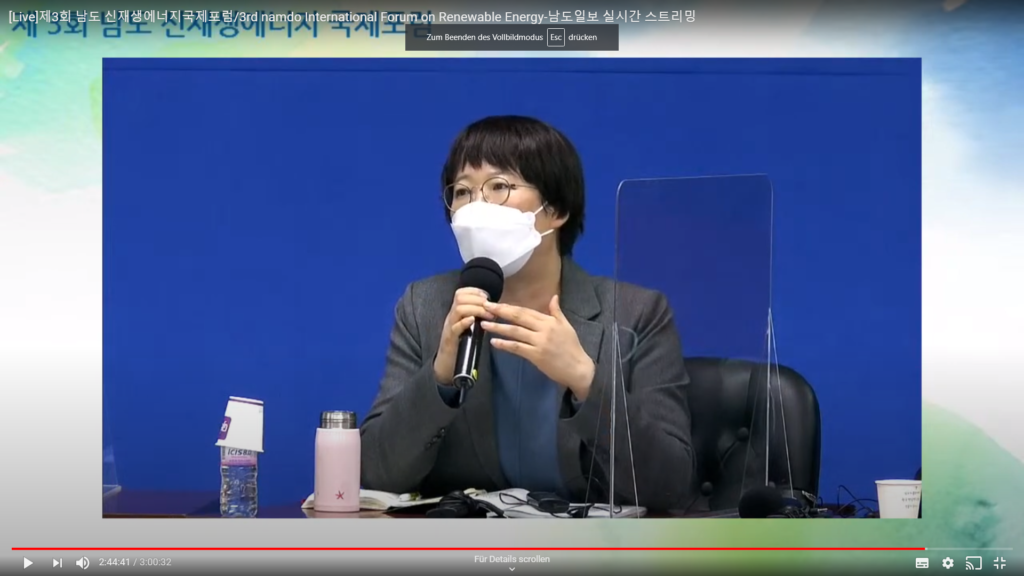 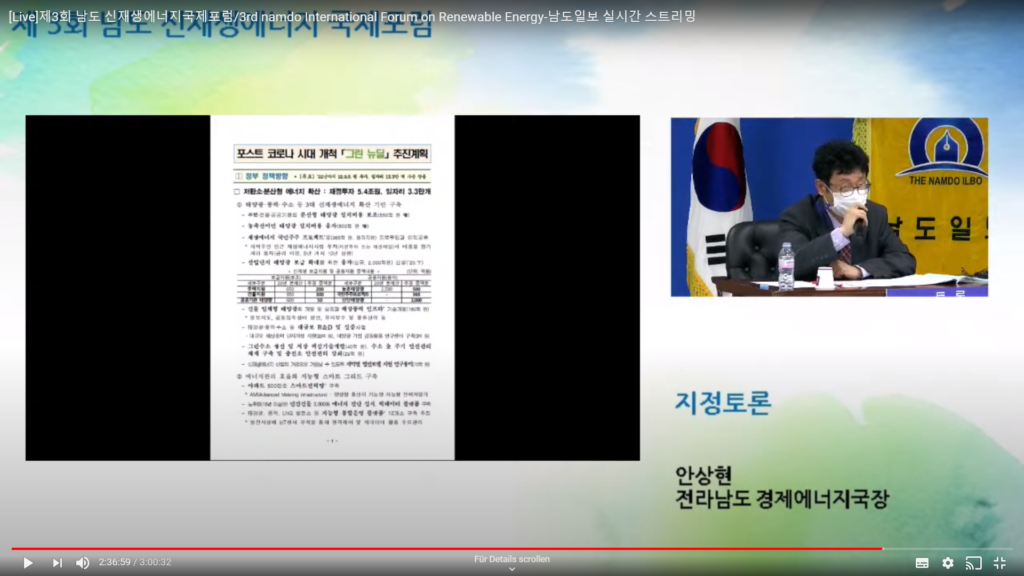 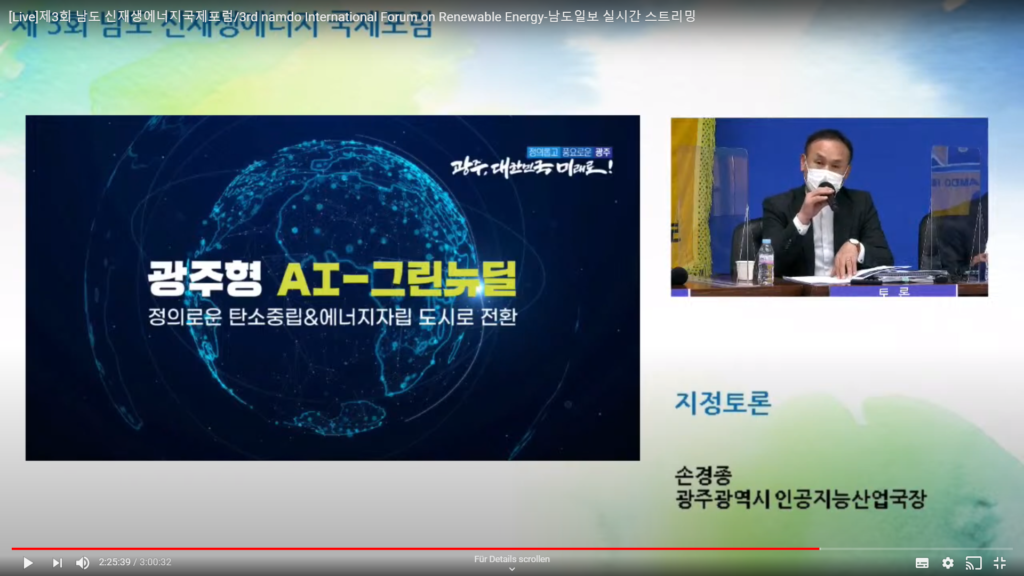 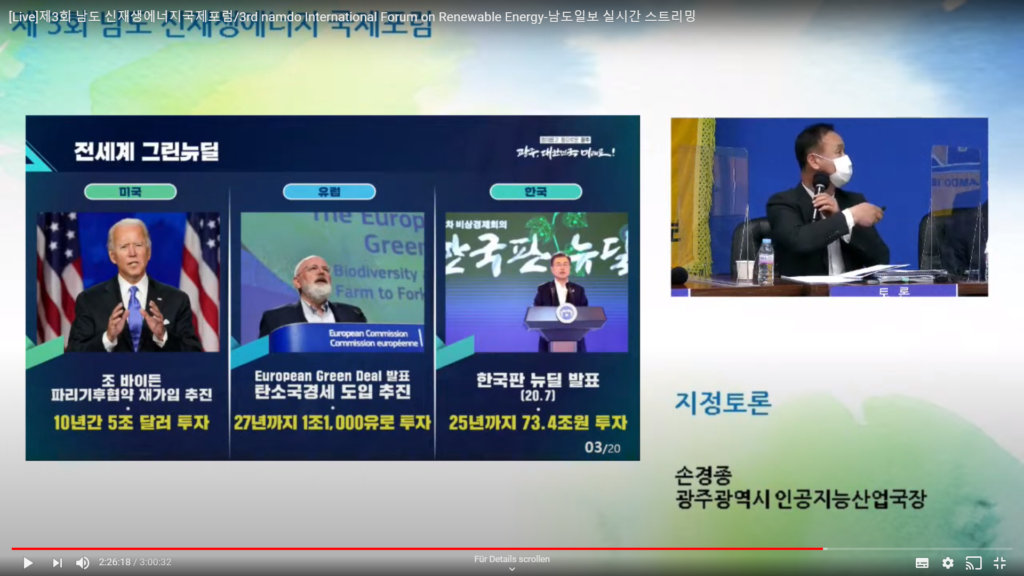 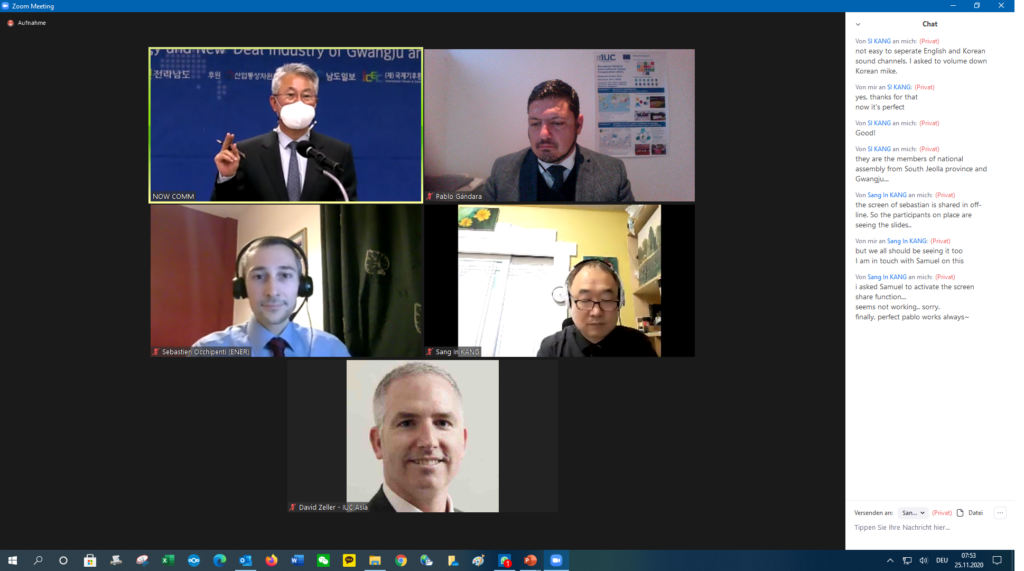 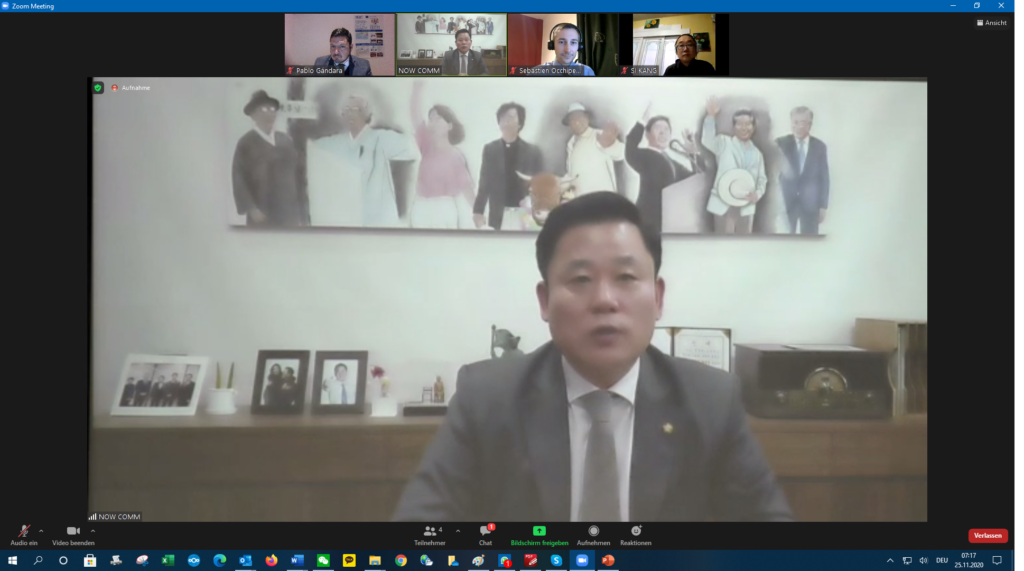