The event presented the actions undertaken by the EU to deliver the Voluntary Commitment in framework of the Habitat III Conference of 2016, to expand opportunities for city-to-city cooperation at regional and international level, and in that way to contribute to implementing the New Urban Agenda. Actions include the EU funded International Urban Cooperation (IUC), World Cities and URBELAC projects. These innovative projects and programmes seek to promote sustainable patterns of urban development in accordance with the Sustainable Development Goals, through encouraging participating cities to exchange good practices in urban policy and governance, as well as sharing information on trends and dynamics in the field of sustainable and integrated urban development, and to develop shared urban projects.

In his opening remarks, Dr Ronald Hall – Principal Advisor at DG REGIO – introduced the International Urban Cooperation (IUC) project, which runs from 2017-2019. The project supports the cooperation of European cities with pairs from the Americas, India and Asian countries. IUC grounds on the experience of World Cities, a preparatory action funded by the European Parliament supporting EU cities exchange with Australia, Indonesia, South Africa, Vietnam and the Republic of Korea. In both projects cities identify concrete projects for implementation in the short term in various areas including urban innovation (smart cities), green technologies (energy efficiency, low carbon development) and urban renewal. Dr Hall emphasized that initiatives are designed to increase what is known as “triple-helix cooperation” between governments, research and business. World Cities strengthens market opportunities and job creation while pursuing the sustainable economic development of the cities involved, working with a win-win cooperation rationale. 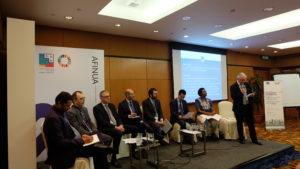 Ms. Aisa Kirabo Kacyira from UN-Habitat referred to the support received by the European Union in localising the sustainable development goals and implementing the UN Urban Agenda. She mentioned EU support to the poverty alleviation in least developed countries through technical assistance as well as financing growth and low carbon economic development in middle income countries like Brazil, South Africa and India. Mrs Kirabo underlined the importance of involving the private sector in the activities implemented among cities as agents of change. She also emphasised the pilot role of cities exchange to influence national level policies. Through projects like IUC and World Cities, cities can benefit of knowledge exchange and advocate for better national solutions. Mrs Kirabo emphasised the importance of monitoring and measuring success. Moreover, she encouraged the EU to connect its programmes with UN-Habitat’s City Prosperity Initiative (CPI), a global initiative that enables city authorities, as well as local and national stakeholders, to identify opportunities and potential areas of intervention for their cities to become more prosperous. CPI defines targets that can support the formulation of evidence-based policies, including the definition of city-visions and long-term plans that are both ambitious and measurable.

The Mayor of Mannheim Dr Peter Kurz introduced the state of cooperation with Chongqing (China) within the IUC project. The city of Mannheim is a middle-sized metropolis with more than 300.000 inhabitants and represents the centre of the European Metropolitan Region Rhine-Neckar with some 2.4 million inhabitants (one of Germany’s driving economic areas). Mannheim is actively involved in the implementation of the UN’s “Sustainable Development Goals (SDGs)”, the “New Urban Agenda” and the “EU Urban Agenda”. In the cooperation with China, the pilot areas are establishing a Chongqing representative office in Mannheim, developing of a freight railway connection between Chongqing and Mannheim and organizing economic cooperation conferences on both cities in 2018 / 2019. Dr Kurz expressed his gratitude to the European Commission for supporting European cities in their internationalization efforts, pointing out that the EU makes a concrete impact on urban governance and economy. He encouraged the IUC ASIA team to arrange a jour-fix to take stock of cooperation and develop the way forward. 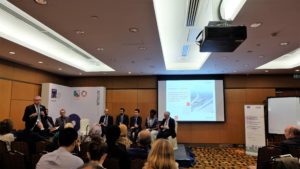 Mr Puvendra Akkiah from eThekwini Municipality referred to the areas of collaboration with Belfast within the World Cities project. eThekwini – with Durban as municipal capital – is the 3rd largest metro in South Africa (3.7 million inhabitants) and has been internationally recognised in the areas of innovation, urban regeneration and resilience. On urban planning, Durban and Belfast are cooperating on post conflict planning challenges, including regeneration plans, measures against segregation, improving social cohesion and building community. Both cities do also cooperate on the exchange of smart cities strategies, action plans and potential projects. Cooperation between the City Councils involves the economic development agencies, universities and relevant innovation clusters in the areas of urban mobility and circular economy. Mr Akkiah mentioned that he and colleagues have been very much impressed by Belfast’s remarkable achievements in the above mentioned areas as well as in the commitment to international cooperation. He also referred to the instruments available for the formalisation of the partnerships moving forward, including an MoU for the proposed collaboration areas, a Twin City Agreement, projects based agreements and an informal understanding of cooperation. Mr Akkiah referred to the EU support through the World Cities project and emphasised the importance of having a flexible approach that allows cities to continuously adapt their pilot projects. 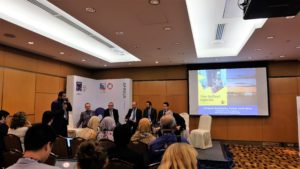 Marco Mazziotti (Milan) explained the state of cooperation between Milan and Vietnam (both Hanoi and HCMC). Cooperation areas include smart city (mainly ICT solutions for traffic management and public lighting) and circular economy (especially waste management). He referred to some concrete projects like the support to developing a unified ticketing system for public transportation in Hanoi. He also mentioned cooperation between start-ups and innovation centres in areas like fashion and ICT. Partners include the PoliHub, a Milan-based business incubator for start-ups with high technological content and the Hanoi Start-Up Center. 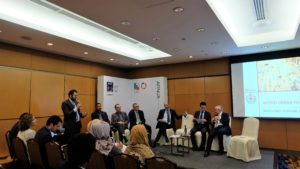 Dr. Shi Xin from the IUC Asia project introduced the cities involved in the cooperation, their main cooperation areas and concrete projects. He explained the role of the IUC project team in streamlining communication, providing guidance for the cities involved and setting goals and milestones for the cooperation. Mr Shi emphasized the importance for European and Chinese cities of involving the public, private and research sectors (triple-helix) in order to achieve sustainable results. The IUC project team also supports cities in identifying additional sources of funding for the proposed actions. 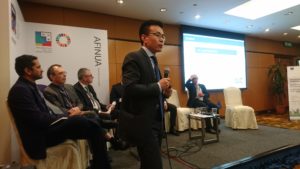 Mr Emanuel Moulin and Mr Raffaele Barbato from the URBACT Secretariat introduced URBACT, Europe’s largest urban cooperation project among EU cities. URBACT’s mission is to enable cities to work together and develop integrated solutions to common urban challenges, by networking, learning from one another’s experiences, drawing lessons and identifying good practices to improve urban policies. Mr Barbato referred to URBACT’s support to the IUC project, especially with regard to developing a tailored-made methodology, supporting thematic coaching for cities and providing tools for city-to-city exchange. URBACT will also provide impact assessment tools during the implementation of the IUC project. 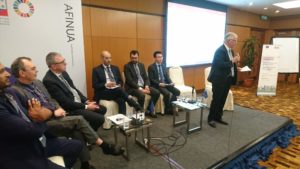 Discussions during the event centred on the involvement of other regions in the IUC programme (Africa, Australia, other Asian countries), the support to cities regarding policy advocacy towards national governments and the visibility and communication activities. 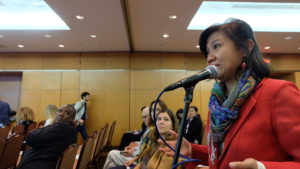