Today the IUC-Asia held its important mid-term meeting on monitoring technical assistance of Climate Action Plans (CAPs) development in 13 pilot cities in Indonesia, Malaysia and Vietnam. The meeting was a chance to take stock with the line directorates of the European Commission (CLIMA / ENER / FPI / JRC), the EU Delegations to the above-mentioned countries, the Global Covenant of Mayors (GCoM) Secretariat and IUC’s technical partners working in the region, namely CCROM (Indonesia), UTM (Malaysia), UNHABITAT (Vietnam) and CDP (all countries).

The online meeting was moderated by Raul Daussa (IUC-Asia) and started with a few welcoming remarks by Alexandra Lehmann from the Foreign Policy Instruments (FPI) at the EU Delegation in Beijing. Ms. Lehmann highlighted the value of cities’ climate action within the IUC project notwithstanding the Covid19 health crisis and emphasised the importance of political guidance from line DGs to the IUC project activities. Michel Mouchiroud from the EU’s FPI Asia regional team referred to the meeting as a milestone to better understand the impact of the IUC activities in the cities and to align their efforts with the national climate policies.  He highlighted the key role of the cities on climate action and the support provided by the Global Covenant of Mayors through reporting frameworks and technical assistance.

Dini Laraswati (IUC Asia Helpdesk) and Piero Remitti (IUC-Asia) provided an overview of the GCoM activities in South East Asia, focusing on 13 pilot cities in Indonesia, Malaysia and Vietnam. They summarised the technical assistance provided by the IUC project in the three countries as well as their coordination with the respective national ministries. They referred to the monitoring measures and to the common indicators for benchmarking.

Ho Chin Siong of the Universiti Teknologi Malaysia (UTM) presented the progress in the IUC pilot cities in Malaysia: Tawau, Kampong Bahru, Maur, Penampang and Hang Tuah Jaya. He stated that due to a recent change of the central government in March of this year, and ensuing restructuring involving key national institutions, plus COVID19, some progress has been delayed on climate action. But, he was happy to announce that the CAPs are being developed in line with the GCoM Common Reporting Framework (CRF) and that they have received solid endorsement and support from PLANMalaysia, Malaysia’s highest town and country planning authority. PLANMalaysia is looking to have climate actions incorporated into future statutory development plans in Malaysia, ensuring vertical integration of climate action. Once incorporated in a gazetted development plan, the climate actions become statutorily binding on all development activities and projects in the cities.

Eero Ailio from the European Commission’s DG ENER requested information on the above-mentioned gaps and cooperation with the GCoM, especially with regard to data as well as with regard to the inspiration for other cities to follow. While referring to the pilot city of Muar, experts discussed the importance of local climate action plans as a reference for the implementation of national legislation (vertical integration).

Paolo Bertoldi from the EU’s Joint Research Centre (JRC) reiterated its commitment to provide feedback to the CAPs and explained the technical support provided to cities across the globe, especially with regard to creating partnerships with local utilities companies to gather accurate data on energy consumption, transportation and so on.

Rizaldi Boer of CCROM-SEAP (Centre for Climate Risk and Opportunity Management in Southeast Asia Pacific) provided a comprehensive evaluation of the climate action planning in the Indonesian pilot cities of Malang, Makassar, Pelembang, Depok and Denpasar, including training and capacity building activities. He referred to the national reporting platforms for  mitigation (SIGN SMART) and adaptation (SIDIK) to climate change developed by the Indonesian Government. He referred to the actual gaps in the climate action planning process, especially with regard to data, low/reduced capacity of cities on climate action planning and the low participation of companies with high energy consumption in the consultations.

Prof. Boer was pleased to report that the Mayors support all programmes related to environmental issues, which can improve the image of the cities, and in the end, be able to lead the perception of the city communities to pay more attention to environmental issues. However, he also mentioned that with the situation during Covid-19, many municipalities have to rearrange their budget and programme priorities, and – in most cases – the climate change issue is being delegated into backseat. This put hold on work progress initially planned as cities postponed their work related to development of CAP.

Michael Bucki from the EU Delegation to Indonesia  referred to the importance for the IUC project to constantly coordinate with the relevant national ministries, especially the Ministry of Environment and Forestry (MoEF) and the Ministry of National Development Planning (BAPPENAS). The European Union and Indonesia work together within a policy dialogue on environment and climate issues, and Counselor Bucki asked the project to develop policy recommendations on local climate action to be included in future bilateral consultations.

Laids Cea from UNHABITAT informed the participants about the developments in the three Vietnamese pilot cities. Baseline Greenhouse Gas (GHG) emissions inventory training has already been completed in Can Tho, and is also planned to be initiated this month in Tam Ky and Da Nang. She stressed that the Vietnamese central government has a strong climate change National Target Programme, and that cities have a strong anchor in defining their directions and strategies. However, Ms Cea referred to the crucial role of provincial governments in defining climate action instruments for cities. She also mentioned the need to further encourage the pilot cities to engage external stakeholders to “legitimise the CAP” and proposed a special session on this within the climate action support measures within the IUC project. Lastly, she emphasised Vietnam’s central government’s strong climate change National Target Programme which offers a strong anchor for cities in defining their directions and strategies. Hanah Paik from CDP referred to the trainings delivered with Cần Thơ on city data gathering and target setting and explained the support to be provided to cities in the region throughout the next months.

Cécile Leroy from the EU Delegation to Vietnam expressed her support to the project activities, the good collaboration with the relevant ministry (MONRE) and the importance of smooth EU visibility during the project activities in Vietnam. Pablo Gándara (IUC-Asia) referred to the transferability of climate action activities from the more experienced Vietnamese pilot cities (Can Tho, Da Nang) to less experienced ones.

Further comments were given by Manuel Carmona – from DG CLIMA – who acknowledged the good work done so far by the IUC project at this mid-term. He asked the project experts to involve further ministries in climate action for a more comprehensive approach, one of which being the Health Ministry, to mitigate vulnerabilities to the general population, threatened by future pandemics. Also, the ministries of finances could be involved while dealing with carbon budgets. He referred to the EU-Vietnam Free Trade Agreement recently signed as a potential framework to support the integration of climate action.

Elise Abbes from the GCoM Secretariat in Brussels referred to the importance of including lessons learned from IUC activities in South East Asia in the GCoM repository of knowledge (regional portal). She invited project partners to participate in the upcoming exchange on pilot projects on climate change to capitalise on best practices from different regions.

Eero Ailio from the European Commission’s DG ENER underlined the importance of co-benefits when motivating several national authorities to coordinate. He also emphasised the importance of developing a holistic approach for solving climate change issues, thus involving partners from public authorities, research, companies and civil society (quadruple helix). As a reference, Mr Ailio referred to the European Climate Pack – part of the EU’s Green Deal – which offers a good framework to involve stakeholders in climate action. He also emphasised the importance of the bilateral EU energy/climate dialogues with South East Asia and of the involvement of provincial authorities in the GCoM governance structure.

Alexandra Lehman and Michel Mouchiroud from the European Commission’s Foreign Policy Instrument closed the meeting with a strong call to reinforce the work with the pilot cities and to keep pace at the regional level. They also invited participants to have a final results meeting in the 4th quarter of 2020. 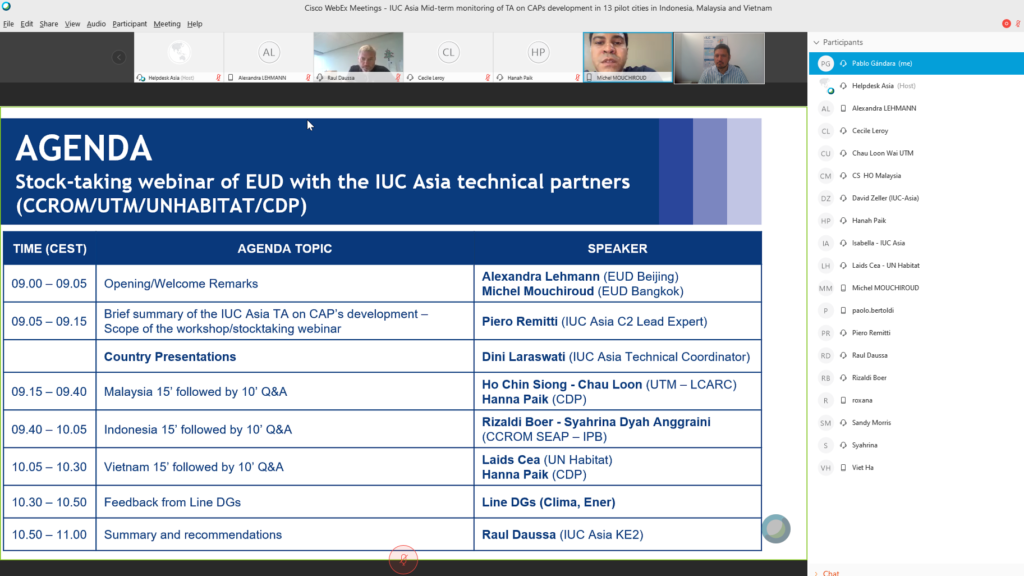 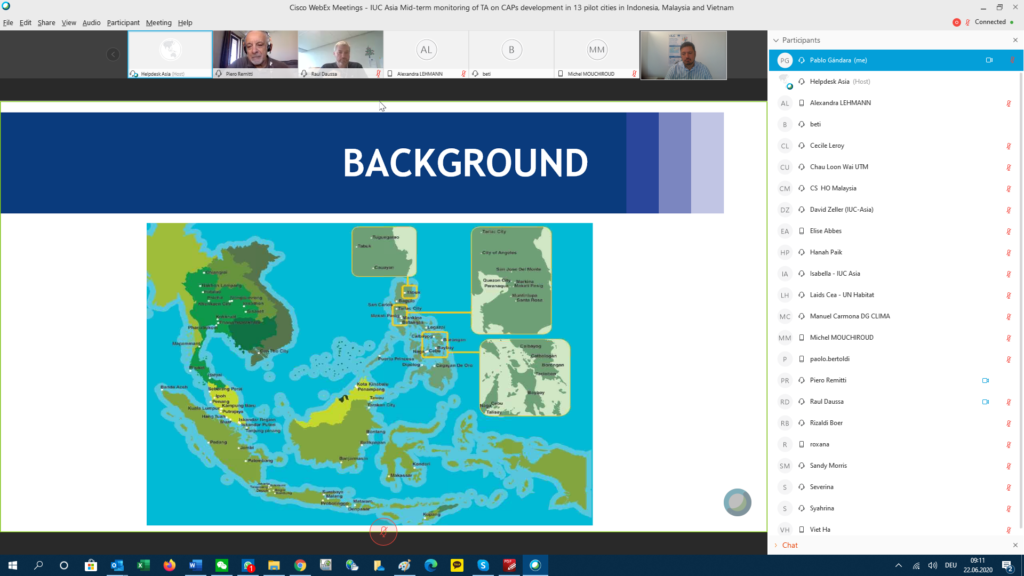 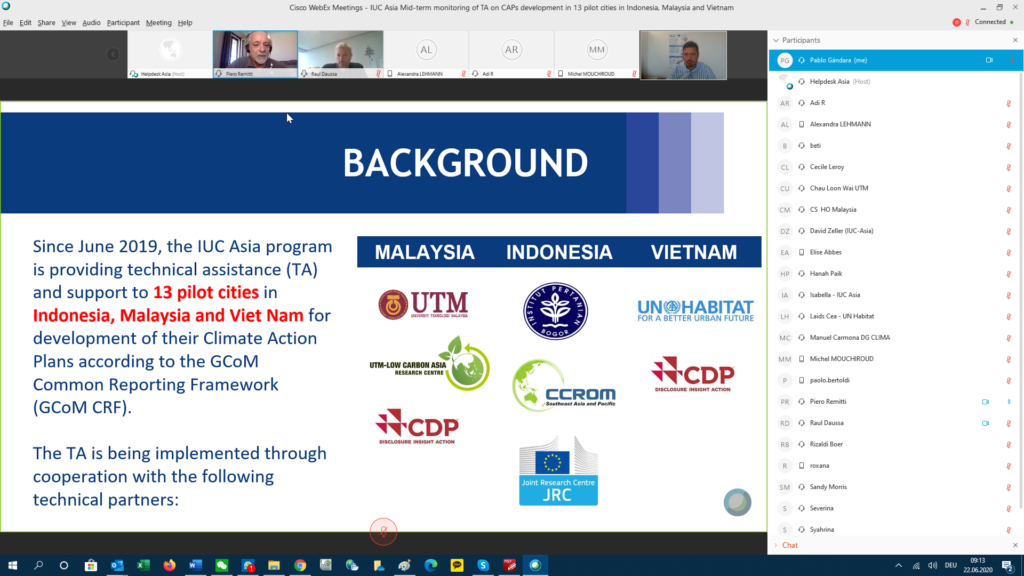 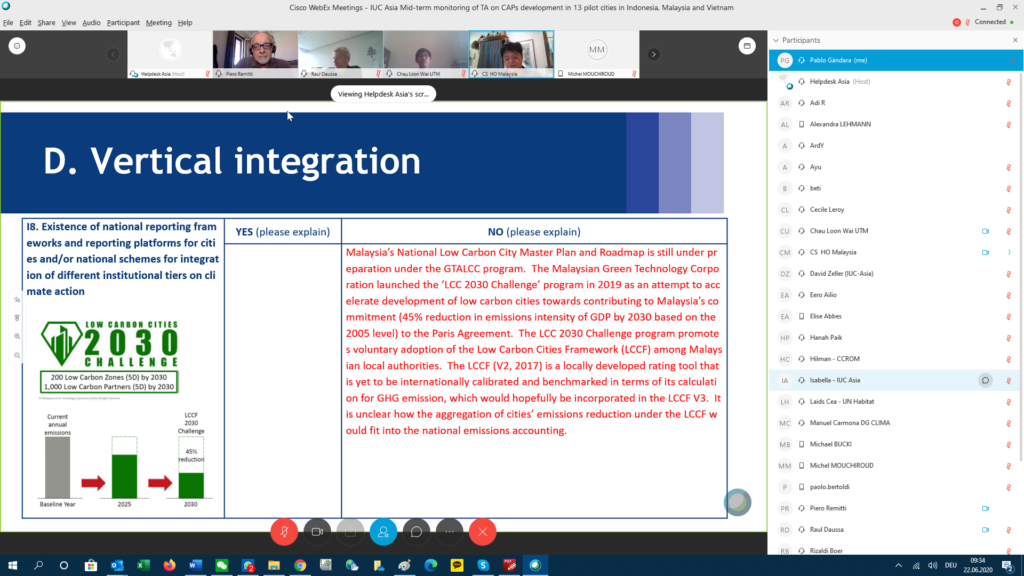 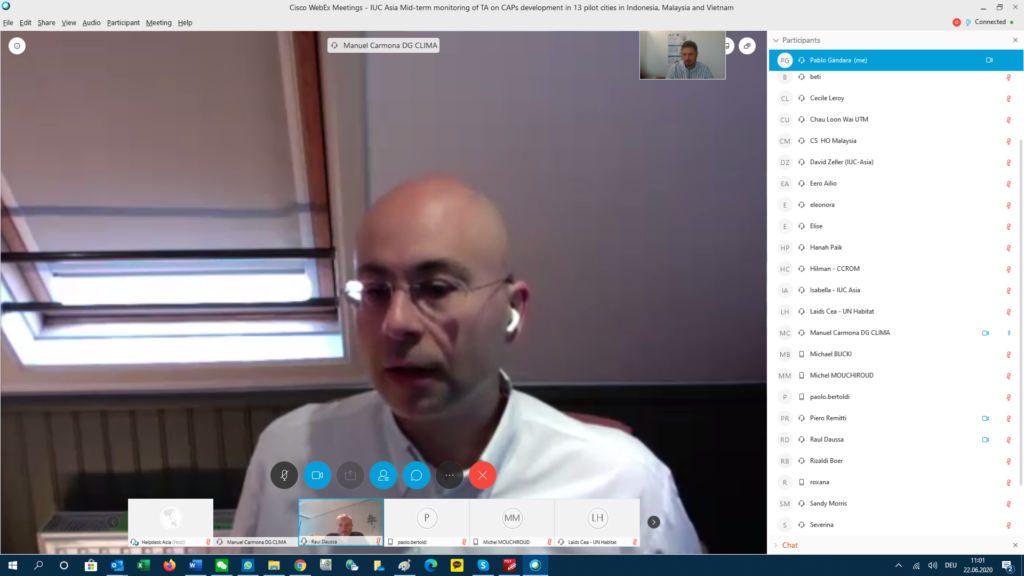 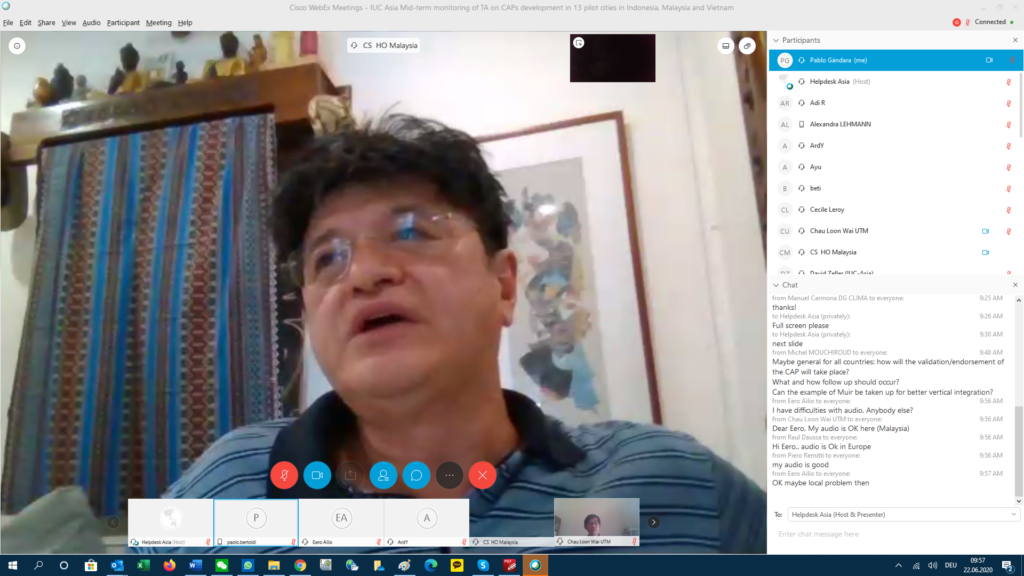 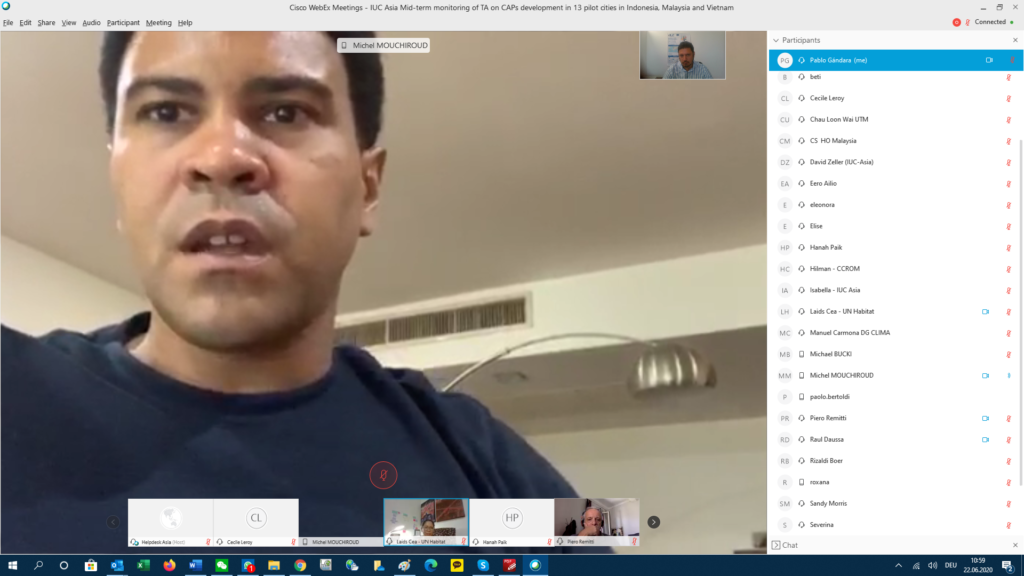 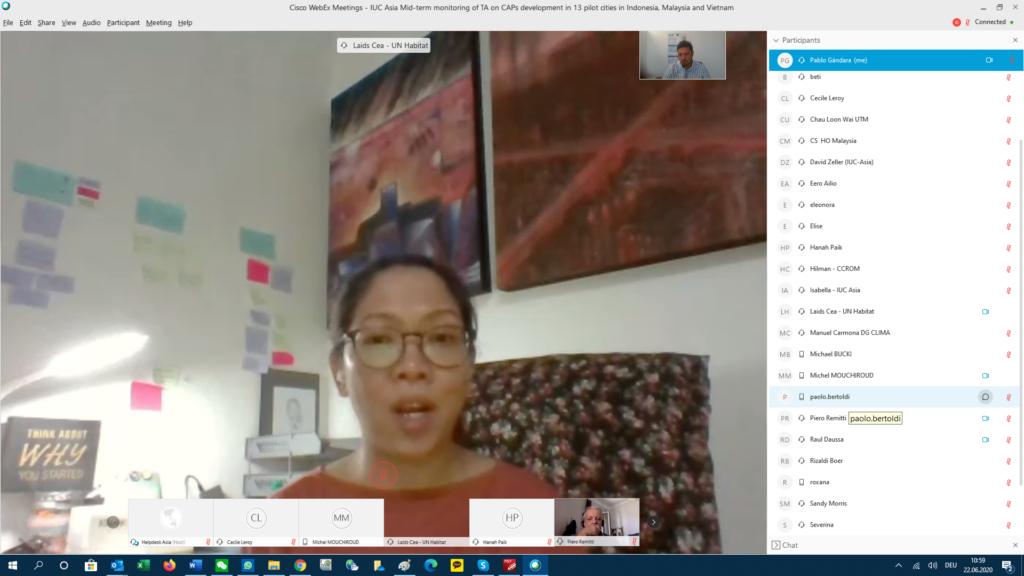 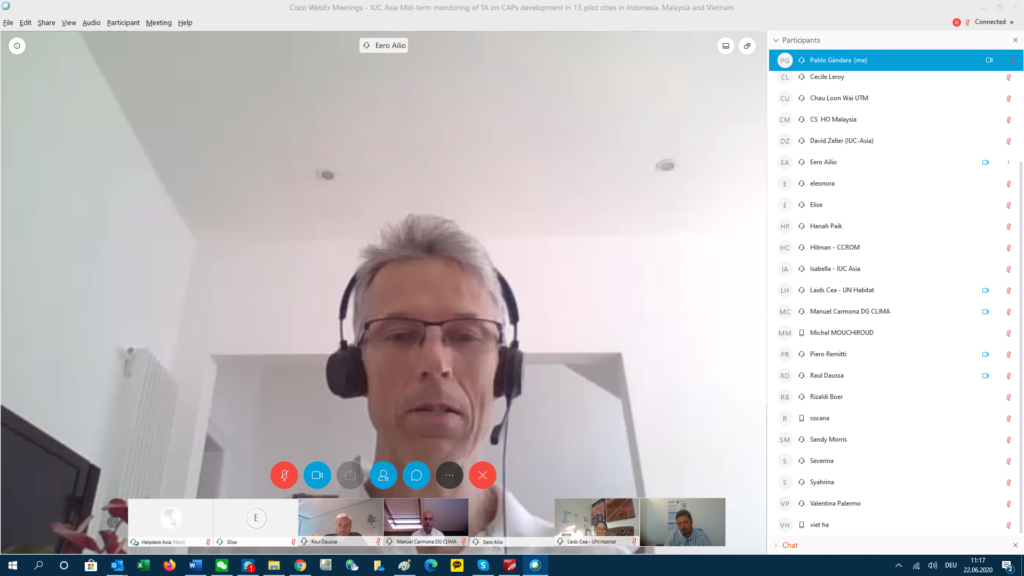 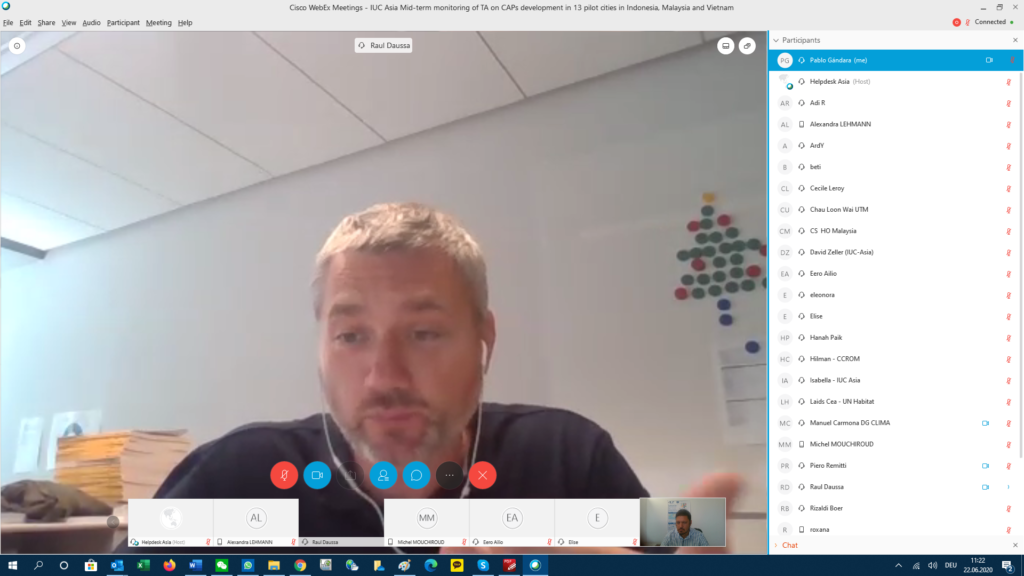