Today the IUC Asia held its first of three webinars on Smart Cities and Blockchain Innovations with more than 30 experts from Europe and China, as part of its pilot project with the Granada Competitive Fund. These webinars will present the main challenges that blockchain technology represents for cities and will debate how to cooperate in order to find common solutions and/or the exchange of information or research in joint venture projects. The idea is to show the actual framework and state-of-the-art of blockchain in the participating cities.

The city of Granada was granted the competitive award of the IUC Asia project. The project selected aims at developing a long-term alliance between triple-helix stakeholders from public authorities, research and business towards the impact and opportunities of blockchain technology for IUC pilot cities. Granada—in cooperation with Rome—has proposed to:

The webinar was opened with words from the Mayor of Granada City, Luis Salvador, who spoke about how blockchain innovations can be useful in creating smart cities. Mayor Salvador stated that Granada is well-known for its beauty, history and cultural heritage, and it will hopefully be soon well-known for leading the blockchain technology and cities’ applications in Europe. Further welcoming remarks were provided by Alexandra Lehmann, stating “Blockchain technology promises to revolutionise the management of smart cities…providing unique tools to coordinate & integrate different city services with transparency, efficiency and privacy.” Mrs Lehmann is part of the Foreign Policy Instruments (FPI) team at the EU Delegation to China and manages the programme implemented by the IUC. Vito Episcopo, Secretary-General, OnTech Granada Digital Innovation Hub Cluster then revealed the support they give for blockchain innovations in Andalusia, Spain.

Prof. Dr. Xiangfu ZHAO, School of Computer and Control Engineering, Yantai University, Blockchain Industry Research Institute discussed the topic of whether blockchain represents a real opportunity for Smart Cities projects in China. Daniel González, General Director of Smart City Cluster, spoke about how they have begun discussions with Granada on strengthening its touristic offer by becoming an intelligent touristic destination. The Smart City Cluster is an alliance of 120+ members of the Smart Cities industry, piloting blockchain and smart city actions in Spain.

Professor Yuhua WU, Chairman of Yangtze River Delta Headquarters Platform Company, 21 Vianet Group, offered the viewpoint from China on blockchain technology and smart cities, stating “There are 500 Smart Cities under construction versus 90 in the EU and 40 in the US. We are currently in the 3rd generation of the internet, and the shift information to mobile value can be enabled by blockchain technology. It will eventually be a requirement from end customers to have vendors who have adopted blockchain technologies.”

Ms. Isabel Rojas, Digital Agenda Coordinator of Granada City Hall, discussed what blockchain technology offers to public administration, such as transparency, integrity, data preservation and secure automation. She presented use cases in public administration, such as: identity management, assets records, smart contracts, e-Voting, e-Health, Justice Administration, education certificates, e-Procurement. Gianluca Fabbri, Director of Smart City Cluster of Rome and Lazio elaborated how they are using blockchain technology to produce certificates of various aspects related to wine production. He also discussed its applications for energy production. Aijuan LI, Professor & Senior Architect of Ziguang Smart City stated,  “We need to go from shared economy v1.0 to v2.0, from shared economy to shared cities, where everyone participates and can benefit from a system that utilizes blockchain technology, while ensuring there are no abuses.”

Xiaoyan HU, School of Cyber Science and Engineering Nanjing South East University explained how in China, a male must be 22 years of age to marry, and with blockchain technology, the registration and final marriage certificate can be digitalized, greatly facilitating the process by containing all relevant information embedded. The moderator for the final segment, Oscar Prat van Thiel, asked final thoughts from Xiaoyan HU, who stated the current value of blockchain is in transactions, but the future value is much larger, as it lies in the transfer potential of information, guaranteeing it to stay secure and tamper proof.
The meeting was concluded with IUC-Asia Team Leader, Pablo Gándara‘s invitation for all interested parties to join the IUC community.
Presentations can be found in the links below:
01 ZHAO Xiangfu 20201029-Is Blockchain a Real Opportunity for Smart Cities Projects in China_EN
02_WU Yuhua_Block Chain & Smart City – Industry View_2020.10.29_EN
03 Daniel GB SCC Blockchain IUC Granada
04 Granada–Presentación Webinar IUC-China
05 Fabbri_Smart_City_Labs_Blockchain
06_Prof Anjuan LI_Ziguang Smart City_EN
07_Prof Xiaoyan HU IUC 整合版本10261704_EN
Picture Gallery 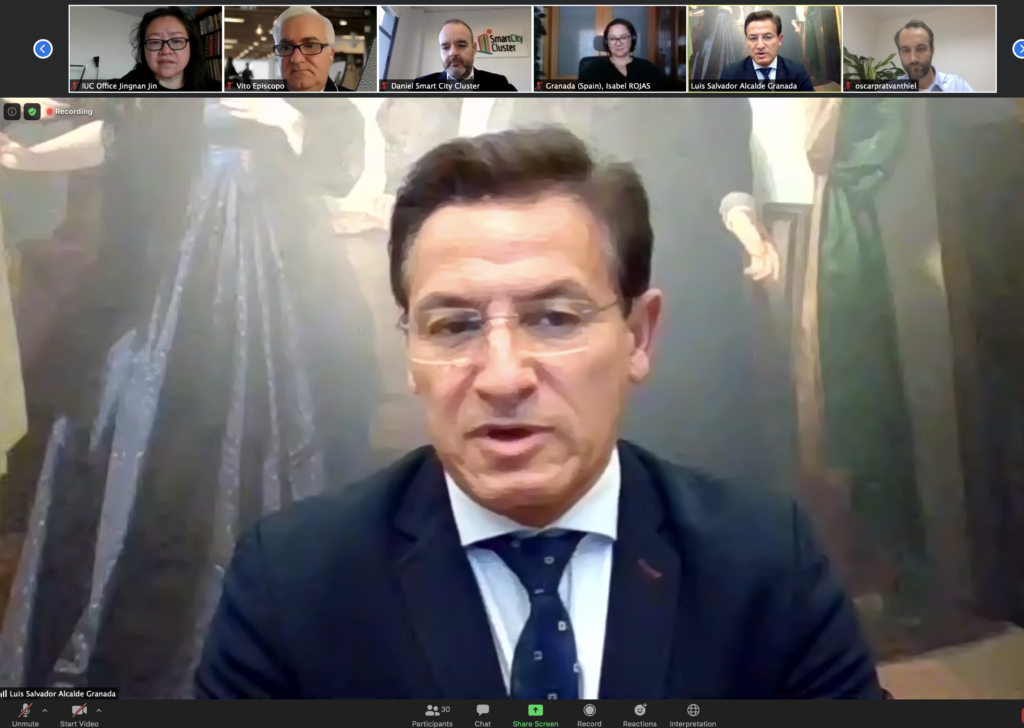 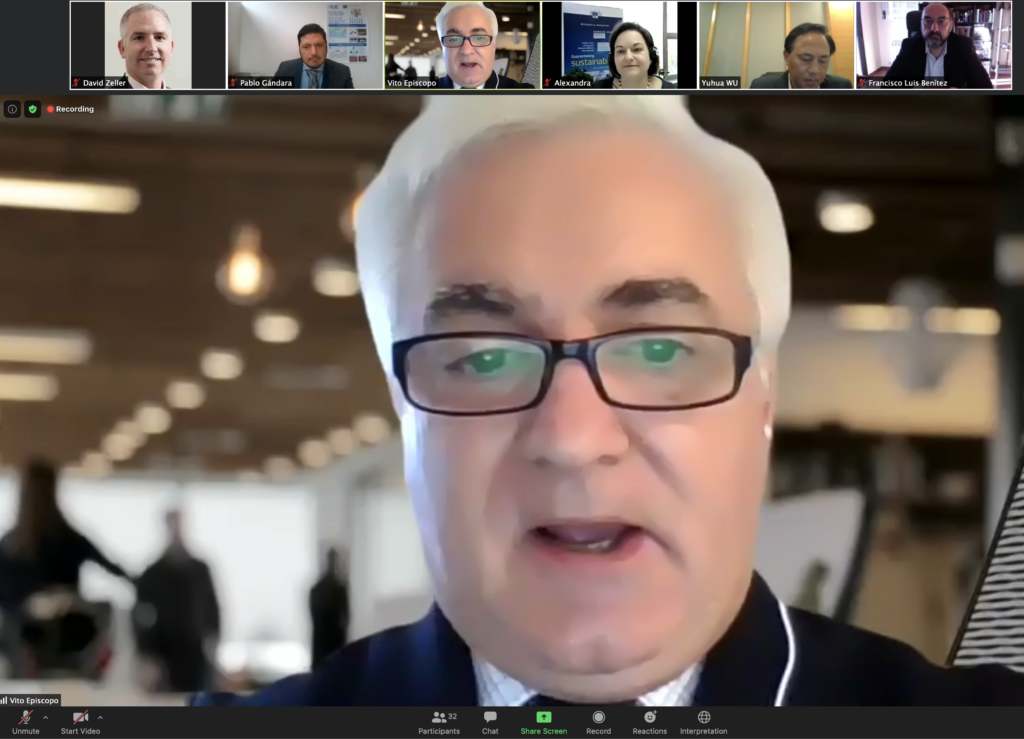 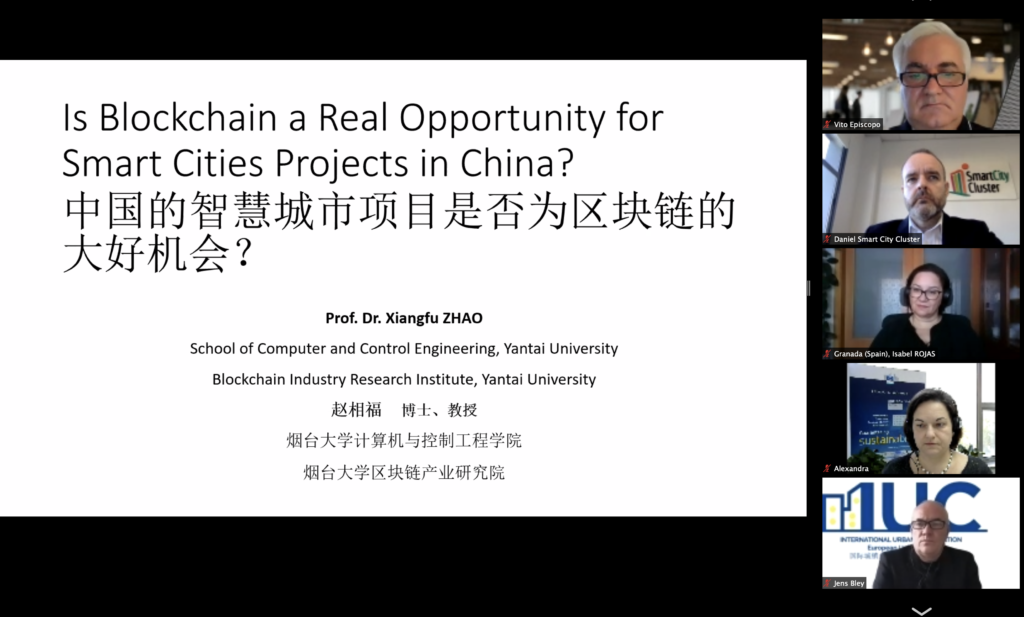 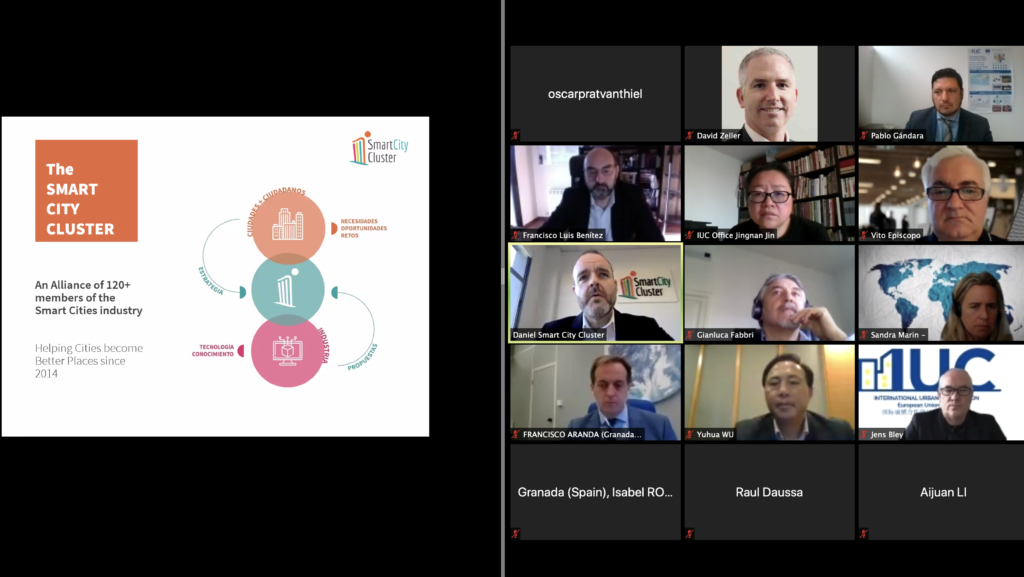 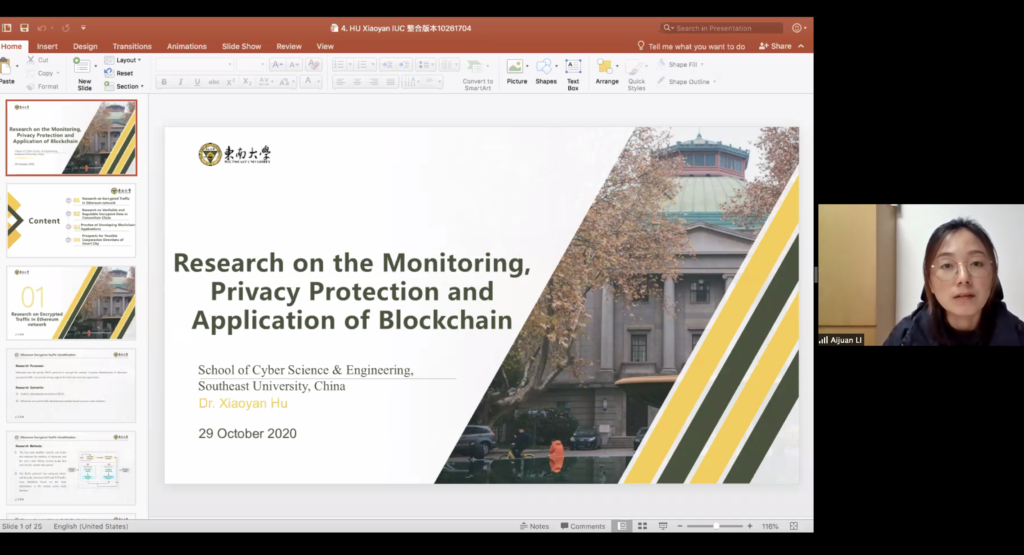 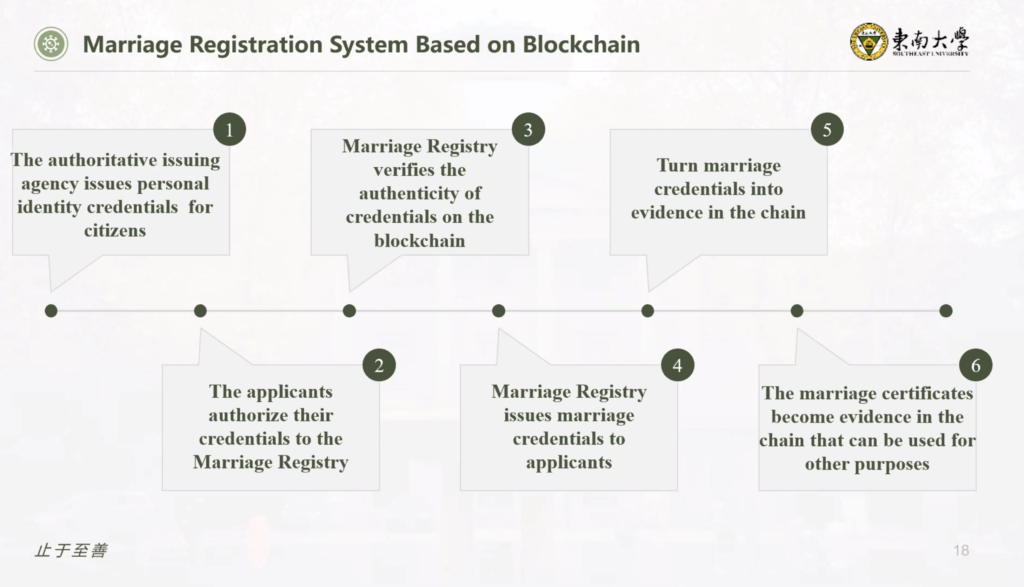 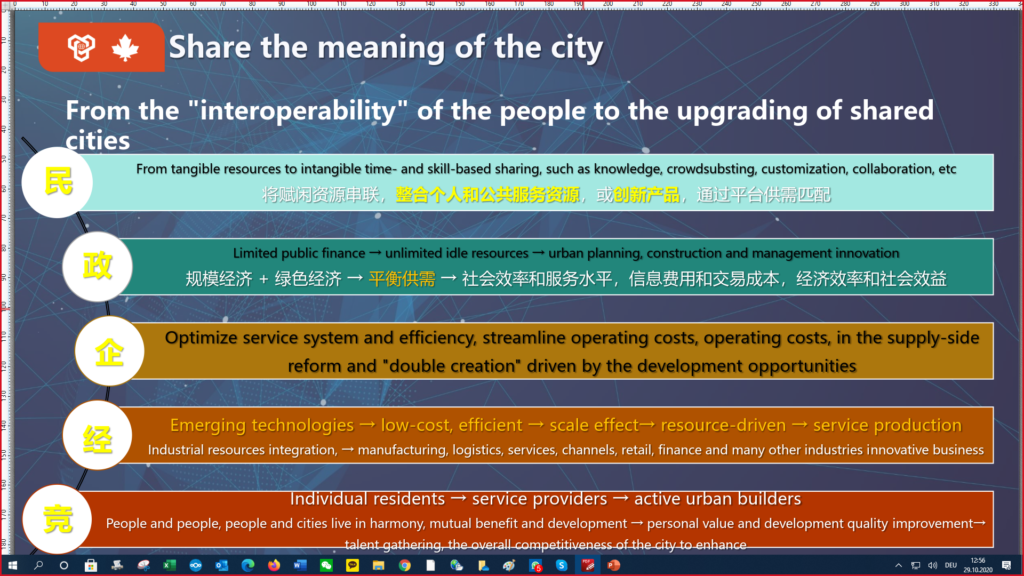 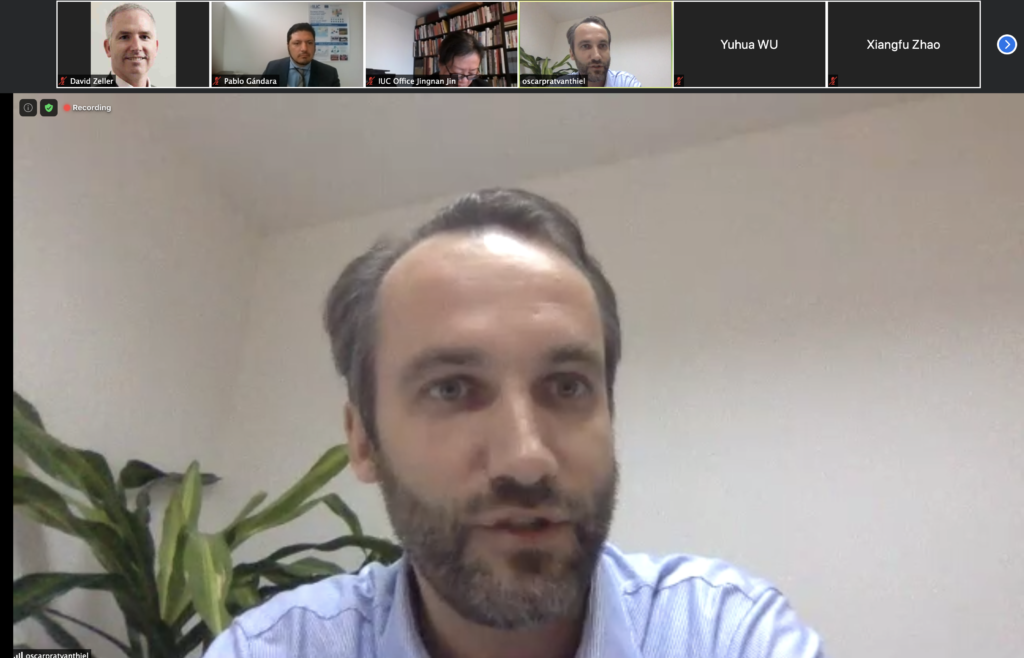 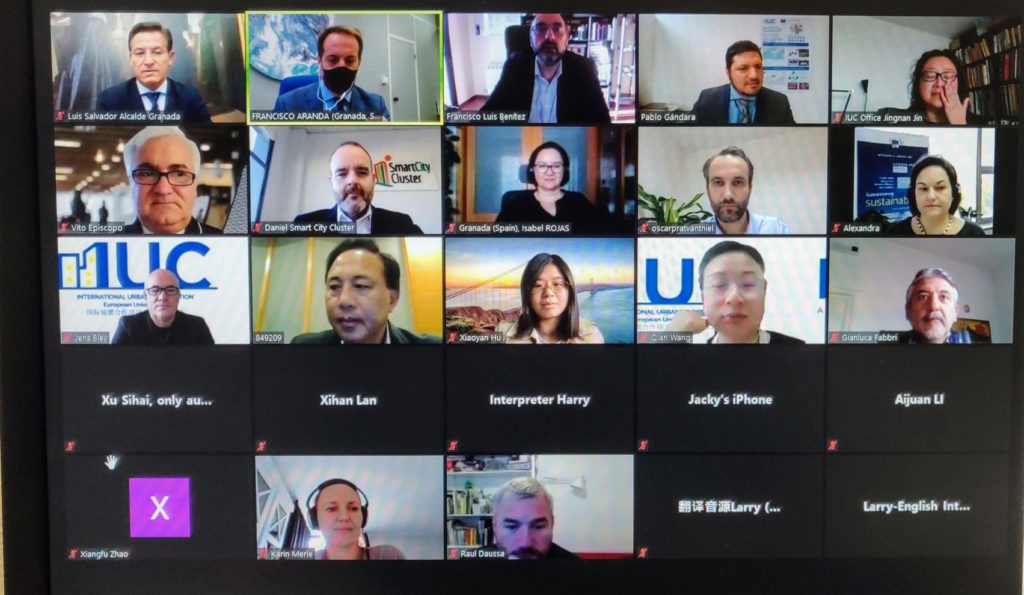 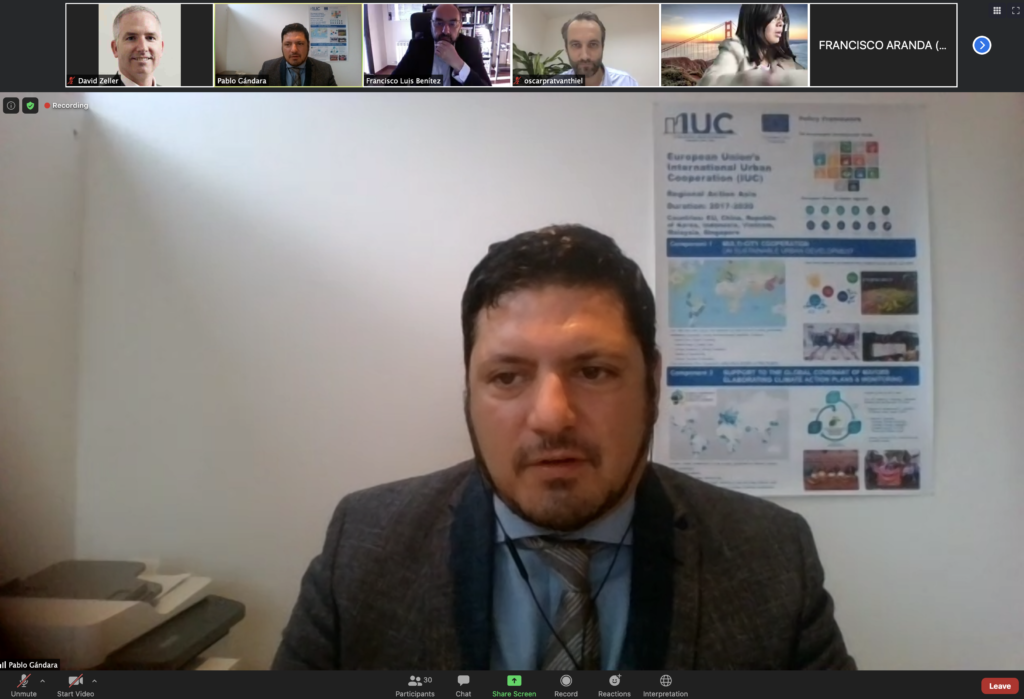