The IUC Asia Programme was invited to participate at the Asia-Pacific Roundtable on Energy Transition & Coal Phase-out in Buyeo, South Chungcheong Province from 4-5 September 2019. The event – organised by The Stanley Foundation and Solutions for Our Climate (SFOC) – was attended by over 50 government policy makers and civil society experts from the Asia-Pacific region. They gathered to discuss ways for subnational governments to accelerate energy transition and phase-out coal-fired power generation. The IUC Asia Team Leader, Pablo Gándara, delivered a presentation on the IUC programme activities towards GHG mitigation in Asia as well as on selected European Union’s experiences on phasing out from coal production and consumption.

Summary by The Stanley Foundation

While the EU and US have been retiring their coal power fleets, the Asia-Pacific region has 70 percent of the world’s new coal power in the pipeline, which, if operated, would derail efforts to limit global average temperature rise to 1.5° C.1 Unwittingly, the Asia-Pacific Roundtable on Energy Transition & Coal Phase-out was held on the same day the UN announced that Asia’s growing coal use would negate climate action progress.

We must first acknowledge the unique contexts faced by subnational governments’ energy transitions, as policy solutions need to be tailored to the local context to be effective. There are, however, common challenges mentioned by subnational government participants across the Asia-Pacific region. Along with the divergence between national and subnational level energy transition policies and ambitions, many subnational governments in Asia must deal with centrally managed power markets, land and maritime management policies inconsistent with the energy transition trend, and grids that are too inflexible or outdated to accommodate renewables. Phasing out coal power is often a struggle against coal power operators’ efforts to make the most of remaining stranded assets and to protect related jobs. When proposing alternatives, some subnational governments in the Asia-Pacific region must address negative public perception and misinformation regarding renewables. Finally, attracting financial investment into these alternatives can be hampered by frequent changes in administration and local renewable policies – leading to uncertainty for investors.

Civil society experts in attendance pointed out various technical and financial solutions for subnational governments to accelerate their energy transition. There were strong recommendations for local governments to prioritize their involvement in grid planning, issue green bonds, and establish green investment vehicles, that would advance renewable financing. On the other hand, governments that lack such resources or technical capacity were encouraged to actively reach out to international funding sources, such as the Green Climate Fund and private investors, with renewable development opportunities.

As one participant stated: “I realized that in different parts of the world, we have a lot of solutions – but we need to transfer the knowledge around.” Subnational government participants expressed their eagerness to collaborate across borders to demonstrate a regional shift away from coal power to political leaders and facilitate knowledge and technology transfer for energy transition. Financing mechanism representatives and private investors strongly encouraged connecting to funding platforms for technical and financial assistance for renewable energy development. Representatives from the EU, UK, and Australia mentioned their governments’ willingness to support bilateral initiatives. South Chungcheong Province’s launch of the East Asian Climate and Environment Alliance, an East Asian coal phase-out alliance for which several participants have already expressed interest in joining, represents the next key opportunity in the region for subnational government leadership to make joint coal phase-out commitments and further delve into available international energy transition resources. 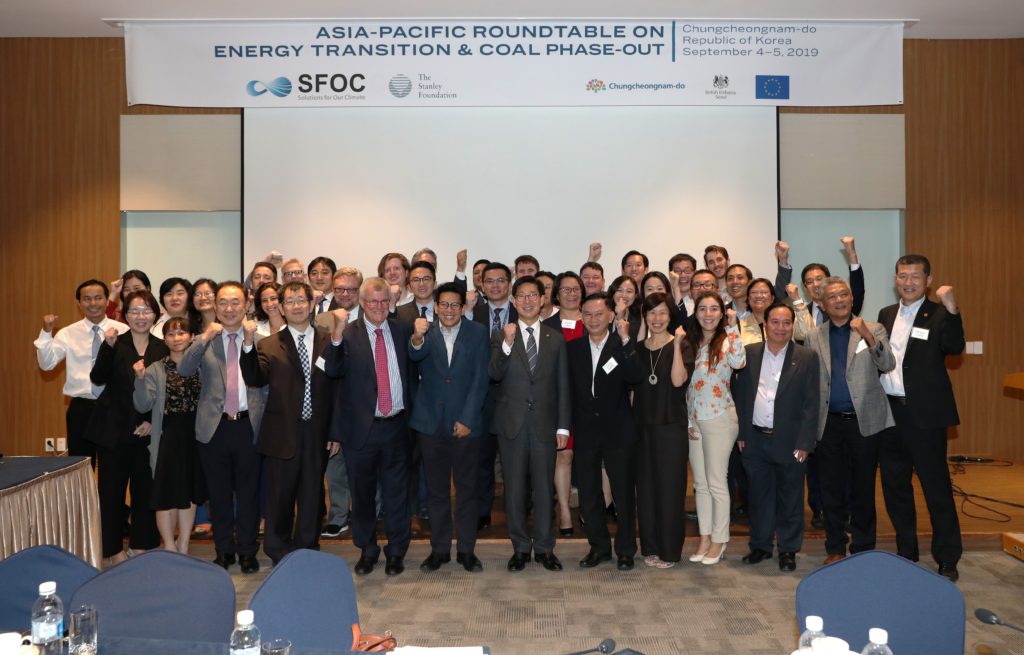