Today, the European Commission’s DG REGIO and China’s NDRC held the high-level EU-China Regional and Urban Cooperation Seminar 2020. More than 80 experts from European and Chinese cities as well as high level representatives of the European Commission and the Chinese National Development and Reform Commission (NDRC) met in combination online and in person in China to discuss several issues of regional innovation and sustainable urban development.

Ronald Hall, Active Senior Advisor for DG REGIO, opened by stating, “This seminar stands in the tradition of our annual events held between NDRC and DG REGIO without interruption since 2006. The EU-China Regional Policy Dialogue is in fact the oldest of DG REGIO’s international policy dialogues and today, for the first time in 15 years, we meet online. As usual, we would like to showcase the best practices, learn from each other and discuss the future cooperation.”

Providing opening remarks from the Chinese side, Dongqiang Zhang, Deputy Director-General, Regional Economic Division, National Development and Reform Commission (NDRC) expressed appreciation to be working with the EU on green transition. “Since the signing of the Memorandum of Understanding on Regional Policy Cooperation between China and the EU in 2006, with the joint efforts of the two sides, the cooperation mechanism has been continuously improved, the areas of cooperation have been gradually broadened, the contents of cooperation have been continuously deepened, and people-to-people exchanges have become increasingly close, with fruitful results” – he said. Referring to the cooperation areas, Mr. Zhang stated “Europe has protected its traditional culture while developing modern industries. It is suggested that the two sides strengthen cooperation in such fields as historical culture and landscape protection and constantly enrich cultural connotations”. He suggested that the two sides strengthen cooperation in the construction of green development demonstration zones, promote green production technology, strengthen the efficient and intensive use of resources, and enhance the role of policies and regulations in environmental governance.

DG REGIO’s Deputy Director General Normunds Popens further noted that the IUC Asia developed visible outcomes including for instance a freight railway connection, the establishment of cooperation centres among European and Chinese cities, a summer school on digital tools for urban planning, the involvement of European experts in planning new urban districts in China and a high level webinar series on the impacts of the blockchain technology for the smart city development. He expressed his appreciation of the work done by IUC Asia, looking forward to the next chapter of IURC, with the added Regional Innovation component, stating “I am glad to say that, to live up to our commitments, from 2021, we will build on the IUC success so far through the launch of a second IUC phase, to be called the International Urban and Regional Cooperation: sustainable and innovative cities and regions (IURC), including therefore a specific component for cooperation between regions on regional innovation and smart specialisation policies and practices. IURC will support from next year region-to-region cooperation in the field of innovation to work together through partnership to improve and to internationalise their respective regional innovation strategies and clusters, including participation of SMEs in the innovation sector and promoting international value chains.”

Panel Discussion 1: The Green Deal—Potential for Cities and Regions

Alexandra Lehmann, Attaché, EU Delegation to China introduced representatives of Bologna, Chendgu, Granada & Yangzhou, and moderated an interactive discussion between the cities. In her introduction, Ms. Lehmann referred to the U-CAPs of these four cities which focus on specific areas like industrial design & circular economy cooperation, blockchain technology and life sciences, smart city and energy transition, as well as on the implementation of joint activities within the International Horticultural Exhibition taking place 2021 in Yangzhou.

As a precursor to the panel discussion, a keynote on the EU Green Deal was given by Octavian Stamate, Counsellor for Energy and Climate Action at the EU Delegation to China, who noted the good work done by IUC Asia. He recalled a meeting with European and Chinese IUC pilot cities two years ago at the EU Delegation. “In Europe, even before the outbreak, the European Commission had put forward an ambitious program called the European Green Deal, designed to make our economy more sustainable and to turn environmental and climate challenges into opportunities, while ensuring that transition to the new model of development is just and fair for all European citizens” – he said. Mr. Stamate explained that in the EU, climate action will be mainstreamed in policies and programmes, with a target of 30% of total EU 2021-2027 expenditure dedicated to climate actions and projects. “Given the weight of the EU China Strategic Partnership on Urban and Regional Cooperation – results achieved locally will surely have impact on a global scale” – he said.

Qian Wang, IUC Asia, Lead Expert moderated the discussion between Barcelona, Liuzhou, Chongqing & Mannheim. The keynote was delivered by Wei Xu, Institute for Interdisciplinary Information Sciences, Tsinghua University, Associate Professor, with a speech on The Prospects of Cooperation between Digital China and EU.

Taking part in this discussion were Bettina Stollar, Programme Director Asia-Pacific, Barcelona City Council; Zhuangzhi Yang, Deputy Director, Liuzhou DRC; Jiangchi Zhou, Deputy Director Chongqing DRC; Jia Song, Head of China Desk, Mannheim City Council. Ms. Stollar introduced Barcelona’s Action Plan developed with Liuzhou, which includes triple helix partners from public authorities (Barcelona’s urbanism institute), research (Barcelona’s Polytechnic University), and the business side (Gina Architects). “The IUC programme seems to be a perfect fit for working with China” – she said.  Mr Yang from Liuzou reviewed cooperation with Barcelona and emphasised the importance of a cluster-style joint collaboration with other European and Chinese cities. He featured several meetings held between Liuzhou City officials and European cities since 2019 and emphasised the good collaboration notwithstanding pandemics. Ms. Song from Mannheim reviewed the achievements made within the IUC collaboration with Chinese cities, focussing on pilot projects with Chongqing that include the cargo railway connection and the newly launched Mannheim/ Rhein-Neckar Chongqing Centre (MA/C/C).  Mr. Zhou from Chongqing reviewed ongoing cooperation within the IUC since 2017 and focused on the before mentioned cooperation projects with Mannheim, inviting other European and Chinese cities to collaborate.

Following the panel discussions, Amadeo Jensana, Head of Department of Economy, Casa Asia and Lun Liu of Peking University presented the EU-China Regional Innovation Study, commissioned by the IUC Asia project, resulting in an important analysis to set the stage for the upcoming EU IURC programme. Jaime del Castillo, Director General of INFYDE complimented the presentation with a talk on Region-to-Region Cooperation on Regional Innovation based on the EU- Latin America experience.

Ramón López Sánchez, Policy Coordinator for International Relations, DG REGIO delivered the closing statements and way forward from the European perspective, stating “As we have seen today from the different presentations, it is clear that the biggest burden of the current crisis is carried by cities. Two third of Europeans and more than 50% of China’s population live already in urban areas and their population will not stop increasing. Cities are hubs for innovation and knowledge but also generate risks and externalities that need to be mitigated and anticipated. I think the meeting today and the exchanges during these last months have been very useful as shows that there is a firm commitment on both sides:

Video of the IUC Project 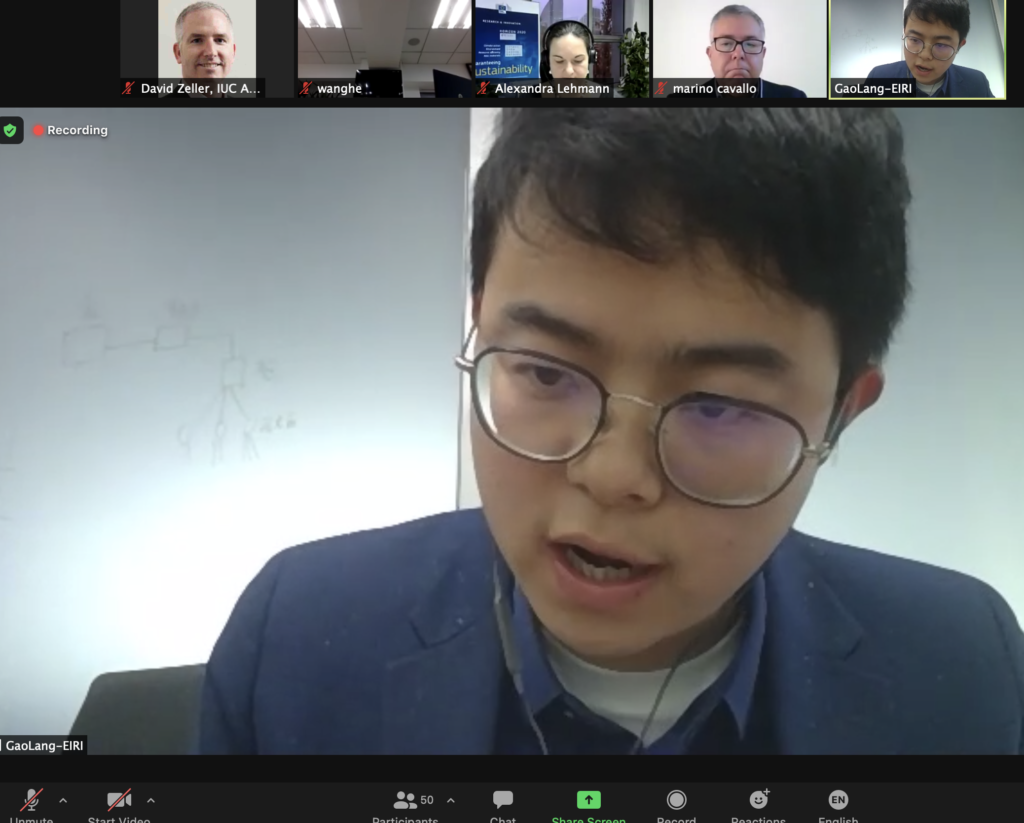 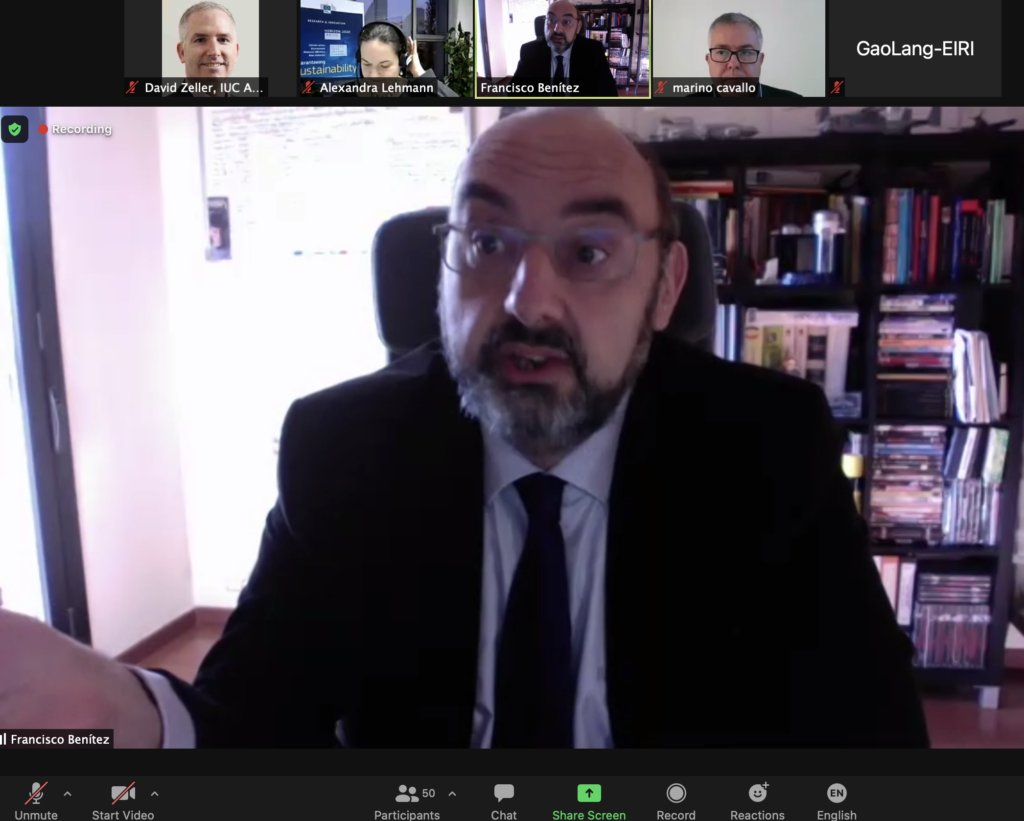 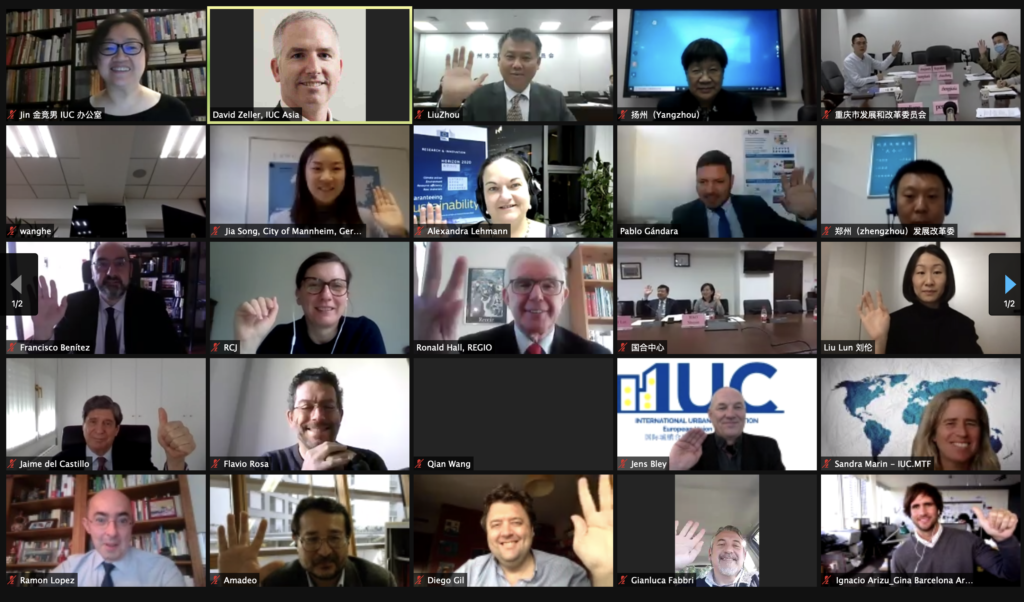