Today the IUC-Asia held its final webinar on technical assistance of Climate Action Plans (CAPs) development in 4 pilot cities in Malaysia, consisting of Penampang, Tawau, Muar and Hang Tuah Jaya. The meeting was a chance to present the final products (CAPs) and discuss the lessons learned during the process between the Directorates-General of the European Commission (CLIMA/ENER/JRC), the Service for Foreign Policy Instruments (FPI), the EU Delegation to Malaysia, the Global Covenant of Mayors (GCoM) Secretariat and IUC’s technical partners working in the region, namely UTM and CDP. The event was moderated by Raul Daussa, Lead Expert for Cities and Climate of the IUC Asia project.

The results of a mid-term monitoring webinar were also reviewed, identifying emerging needs and challenges for future EU cooperation policies and actions in each country. The technical support given to the pilot cities is comprised of step-by-step training and knowledge sharing on how to develop each essential component of a CAP, namely baseline GHG emissions inventory, target setting, climate risk and vulnerability assessment (CRVA), monitoring/verification, and climate finance options/implementation. The CAPs are expected to be accomplished by the end of IUC Asia programme and become references for replication in other GCoM cities, continuing into the subsequent IURC programme.

The online meeting was moderated by Raul Daussa (IUC-Asia) with 80 participants and began with opening remarks by H.E. Michalis Rokas, Ambassador-Designate of the European Union Delegation to Malaysia. “By the year 2030, if the actions identified are indeed implemented in the 4 pilot cities, the projected CO2 emissions reduction would amount to 5,589 MtCO2eq. This potential reduction amount is equivalent to 1.2 million cars being taken off the road for a year, or 92.4 million tree seedlings grown for 10 years, or 1,200 wind turbines running for a year.”

Dr. Alias bin Rameli, Dir. R&D Division of PLANMalaysia, Ministry of Housing and Local Government provided further welcome remarks during today’s webinar, stating “I would like to express my deepest gratitude to GCoM and IUC Asia for accelerating the preparation of Climate Action Plans in Malaysia.”

From the EU Commission Directorates, Manuel Carmona Yebra of DG CLIMA, and Eero Ailio of DG ENER discussed how EU climate and energy cooperation can be a driver to combat global challenges. Mr Carmona acknowledged the good work done by the IUC project regarding the technical assistance on Malaysian pilot city CAPs. Mr Ailio noted the importance of developing a holistic approach for solving climate change issues, thus involving partners from public authorities, research, companies and civil society (quadruple helix). As a reference, Mr Ailio referred to the European Climate Pact, part of the EU’s Green Deal, which offers a good framework to involve stakeholders in climate action. He also emphasized the importance of the bilateral EU energy/climate dialogues with Malaysia and the involvement of provincial authorities in the GCoM governance structure.

Results of each of the 4 pilot cities, regarding their respective Climate Action Plans were given by respective city officials (with reports under the Presentations heading below):

Paolo Bertoldi from the EU’s Joint Research Centre (JRC) reiterated its commitment to provide feedback to the CAPs and explained the technical support provided to cities across the globe, especially with regard to creating partnerships with local utilities companies to gather accurate data on transportation and energy consumption. 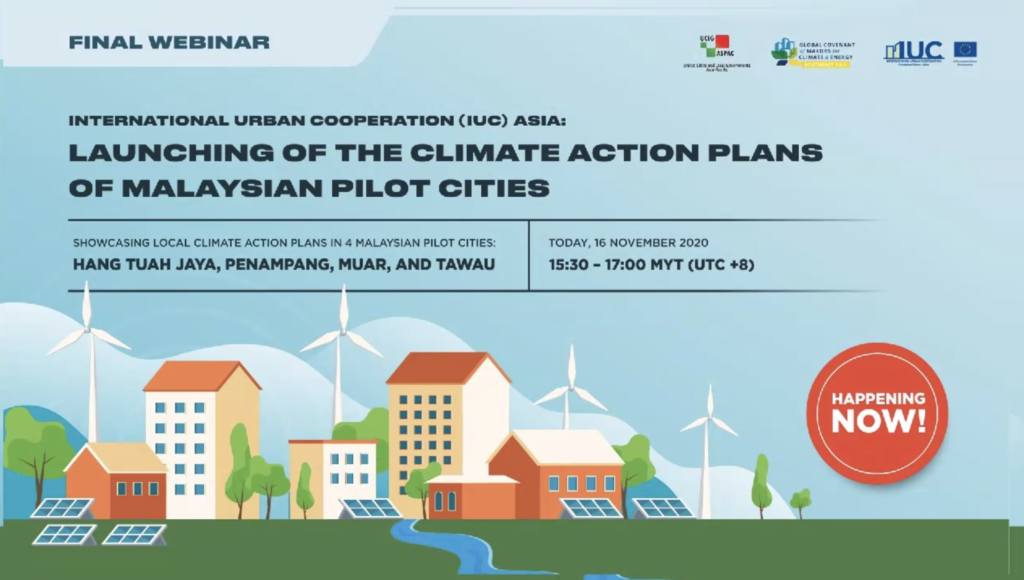 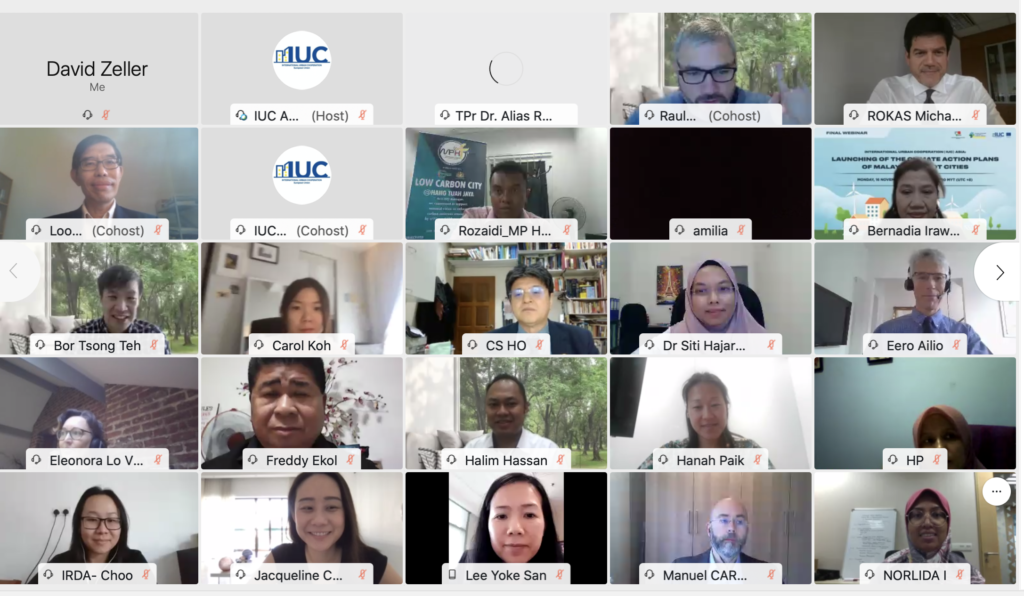 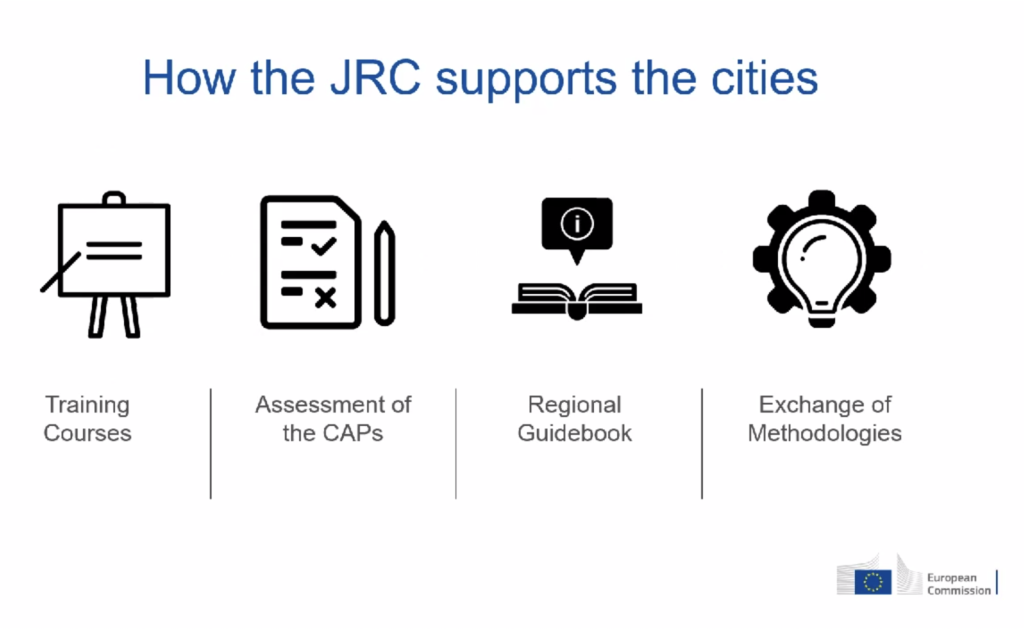 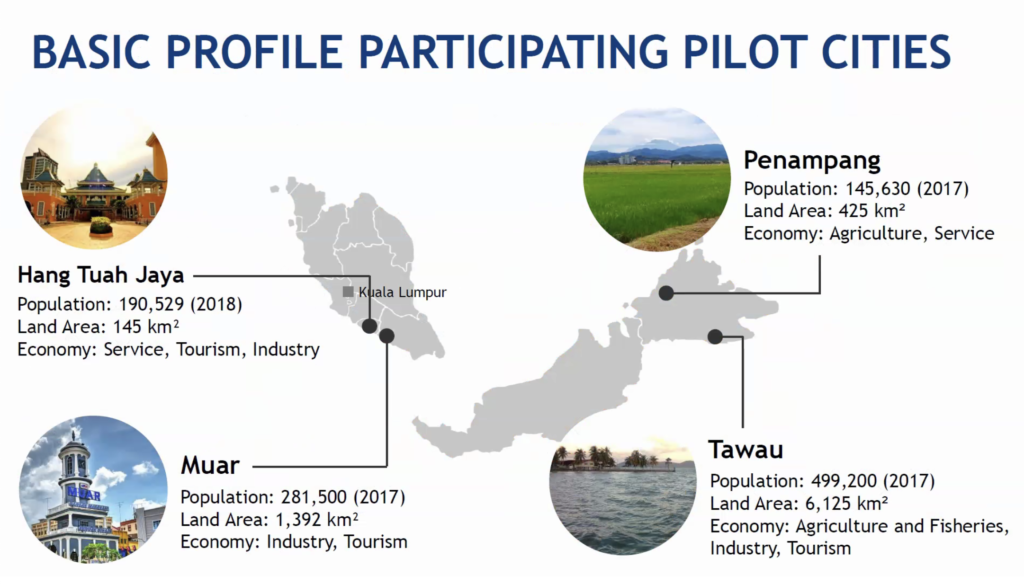 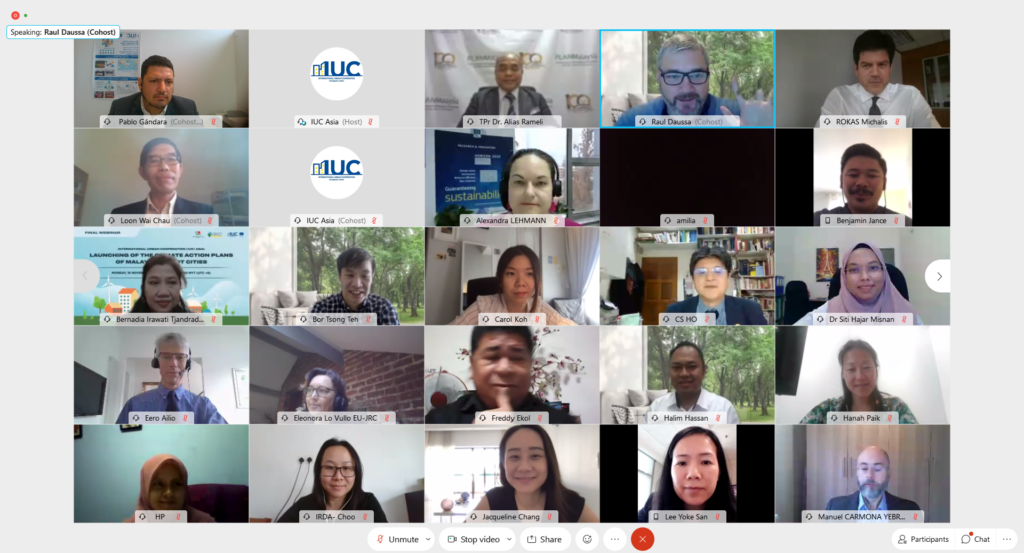 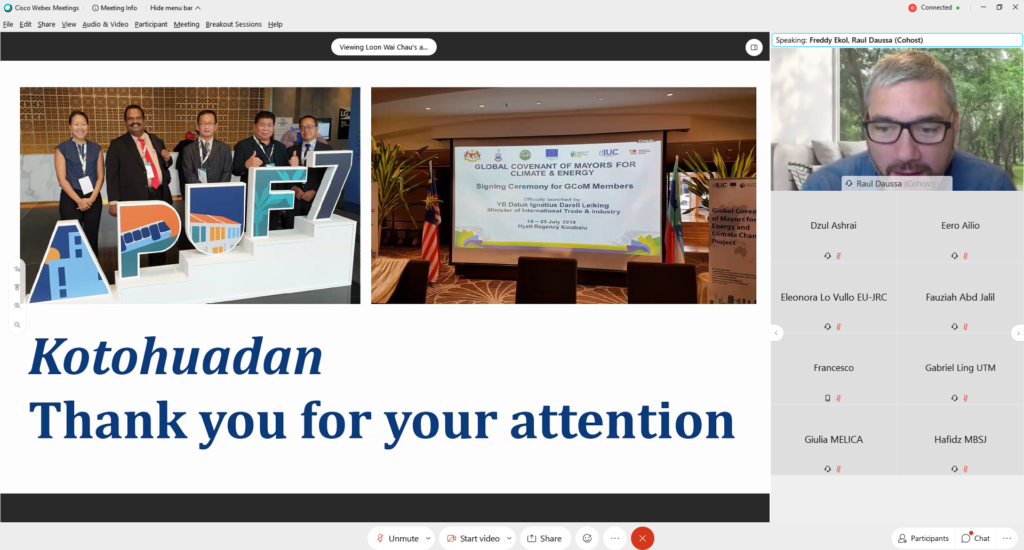