Today the EU Covenant of Mayors (CoM) Office, in collaboration with the Global Covenant of Mayors for Energy and Climate (GCoM) Secretariat, held a meeting with the aim of fostering dialogue and exchange of good practices among GCoM signatories across the world. The event took place online, split into two online sessions with different timings, to accommodate participation worldwide between selected city representatives from Europe, South, East and East Asia, Latin and North America, Africa and Oceania, as well as GCoM Helpdesks, Secretariats and stakeholders form all National and Regional Covenants worldwide. The event was moderate by Giorgia Rambelli from the CoM Office and the GCoM Secretariat.

The objectives of the sessions were to:

The morning session focused on EU-Asia collaboration within the GCoM. Eero Ailio, Senior Advisor at the Directorate-General for Energy of the European Commission, welcomed the participants, discussing local action paving the way to climate neutrality. Mr. Ailio referred to the encouraging experiences in mitigation of GHG emissions and adaptation to the effects of climate change shared by Asian cities since the launching of the GCoM in 2017. “Our path to climate neutrality by 2050 is irreversible...the goal of the European Green Deal is to build a holistic approach for the clean energy transition, which will be the backbone of the green recovery from the COVID-19 crisis” he stated. Mr. Ailio referred to the increased economic competitiveness of renewable energy as compared to the coal-energy, and was confident that the EU policies would facilitate a smooth transition. “The EU will continue support to local climate action in Asia and peer-to-peer exchange between Asia and EU cities through the Global Covenant of Mayors” – he said.  He also referred to the Gap-Fund, a joint initiative by the Global Covenant of Mayors for Energy and Climate, Germany and Luxemburg implemented by the European Investment Bank and the World Bank within the Leadership for Urban Climate Investment.

Amanda Eichel, Exec. Dir. of the GCoM Secretariat, set the scene with the topic of Climate neutrality & green recovery: an urban Opportunity to redesign climate action. The GCoM alliance took stock on the way forward and insights from the regions, allowing cities to share what they are already doing or planning to do, linked to the GCoM’s mission and scope of work. Ms. Eichel also introduced the next steps of the GCoM work-plan as well as the data and validation steps required to support cities climate action plans.

During break-out session I, Raoul Cam, Planning and Development Coordinator of Ormoc City in the Philippines, shared Ormoc’s Climate Action Plan, which identifies the city’s major climate hazards and most affected groups (vulnerable population) to build impactful local actions. As Ormoc City is facing destructive floods and landslides, they have developed adaptation projects including comprehensive agriculture programmes and the utilisation of solar panels. The actions also focus on urban planning to redesign open green spaces and parks as an effort to achieve carbon sink. Nyimas Ida Apriani from the Environmental Agency of Palembang City, Indonesia, shared the recent achievement of the Climate Action Plan developed with support of the EU’s IUC project within the GCoM support. With this CAP, Palembang has mainstreamed the climate issue into the City Development Agenda. She also added that – with the support of the IUC – Palembang has submitted an application to the Gap Fund. In the near future, Palembang will focus on the implementation of its CAP. “Palembang looks forward to more international cooperation, especially in funding to accelerate the achievement of mitigation and adaptation targets” – she said.

The break-out session II focused on implementing cross-sectoral actions and reaping the co-benefits with the support of research and innovation, discussing the reasons why cities should invest in developing these partnerships in order to enhance the knowledge economy, improving well-being and creating wealth. The first speaker, Paulo Calcada from Porto (Portugal) explained how his municipally changed the organisational culture and practices and enhanced the effectiveness of sustainability delivery. By creating an independent entity (Porto Digital) the municipality was able to deliver innovative services for instance in data-driven decision making during COVID-19. The importance of creating local and international partnerships and owning the data were highlighted as some of the lessons learned from the city of Porto. Dr. Rajan Chedambath from Kochi (India) explained how in 100 years the city changed from backwater to landmass and it is therefore vulnerable to climate change impacts, and innovation has been integrated into the climate assessment report and resilience plans. Through IUC city-to-city cooperation with Vilnius (Lithuania), Kochi is adopting a new waste management system. A short Q&A session followed with questions on the involvement of civil servants in R&I projects and how to attract the private sector.

The breakout session III dealt with financing climate action at the local level. The moderator, Eszter Mogyorosy from ICLEI, focused on the importance of sound project preparation for the pre-feasibility stage. This session showcased the example of Iskandar, Malaysia. Boyd Jouman, Senior Vice President & Lead for Resilient Environment at the Iskandar Regional Development Authority (IRDA) underlined the importance of having a robust climate action plan (“Low Carbon Society Blueprint for Iskandar Malaysia“ – in his case) and integrating it into the regional/urban development strategy. The blueprint’s progress is monitored by the Johor Low Carbon Council across the Federal State – he said.

The blueprint – which has been aligned with the Comprehensive Development Plan for Iskandar – was developed in 2014 and includes 12 key actions (281 programmes) to reduce GHG intensity by 58% by 2025. He stated that of the 281 programmes, 70 have been implemented and 202 are on-going actions. These include the development of Iskandar Malaysia Ecolife Challenge (IMELC) – a primary schools education programme focussed on achieving a low carbon society, the continuous review of Iskandar’s Green Economy Guidelines and the implementation of Japan’s “Comprehensive Assessment of Built Environment Efficiency (CASBEE)“.

While discussing how to implement climate actions with limited financial resources Mr. Jouman emphasised the importance of establishing connections that can lead to partnerships, sponsorships such as company-to-company. “In order to explore further financial sources, cities’ climate planners should not complain or be overly concerned about having no money but establish strong personal relations with parliamentarians, industry players, businesses, agencies (local and federal), NGOs, business chamber, etc.” – he stated. Mr. Jouman thanked the European Union and the Global Covenant of Mayors’ support channelled through the IUC programme which allowed his regional authority to maximise international exposure. This has been reflected in a stronger local co-ownership of the low carbon and adaptation actions. 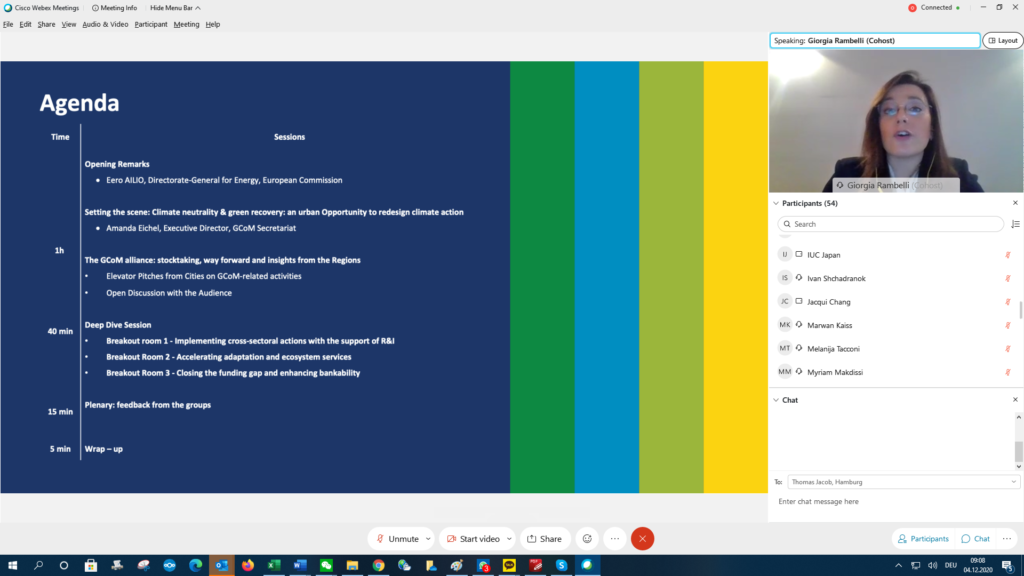 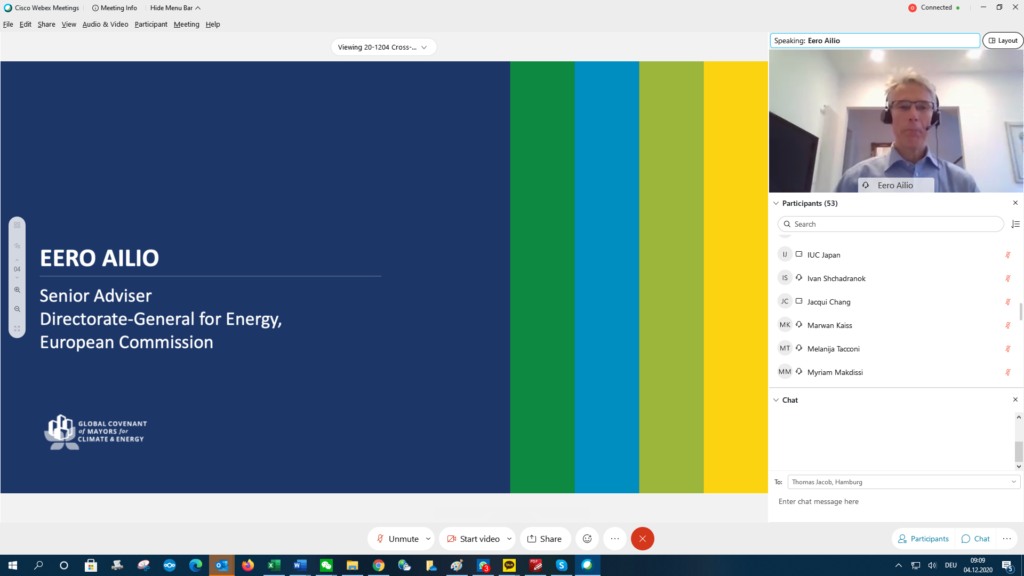 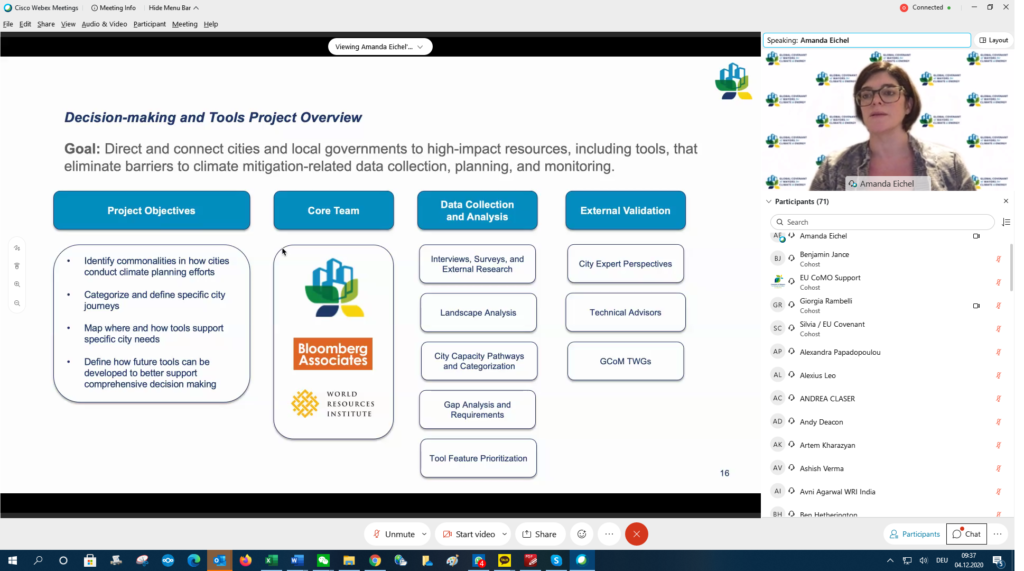 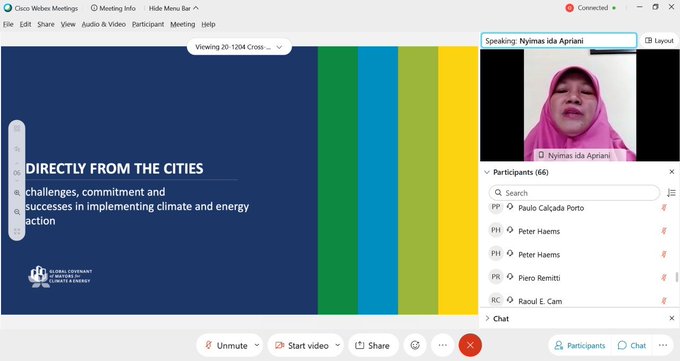 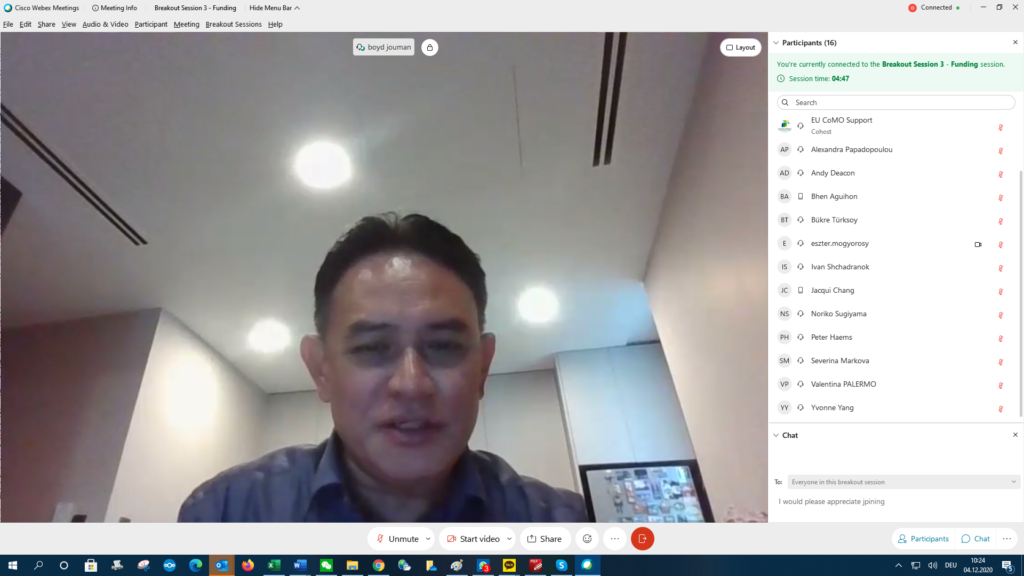 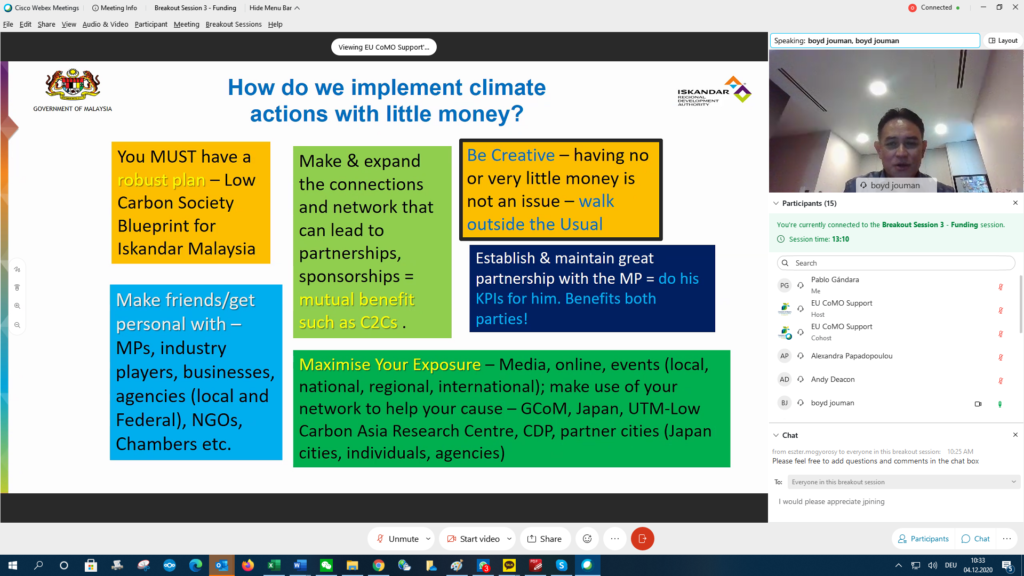 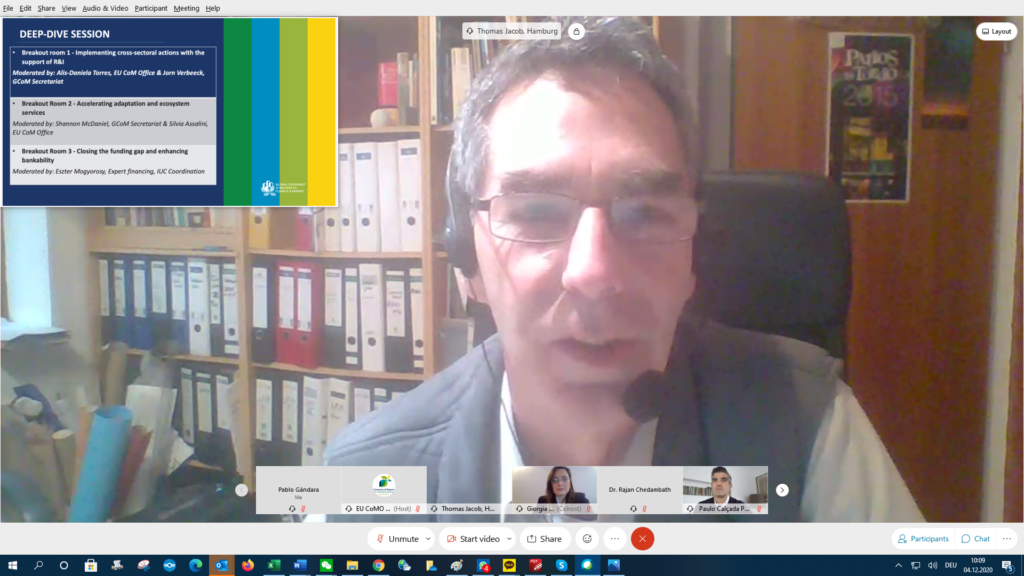 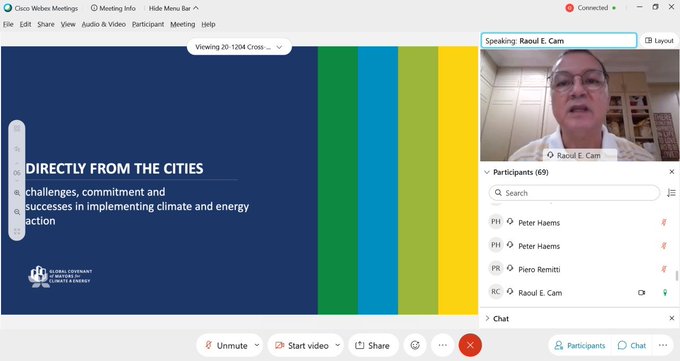 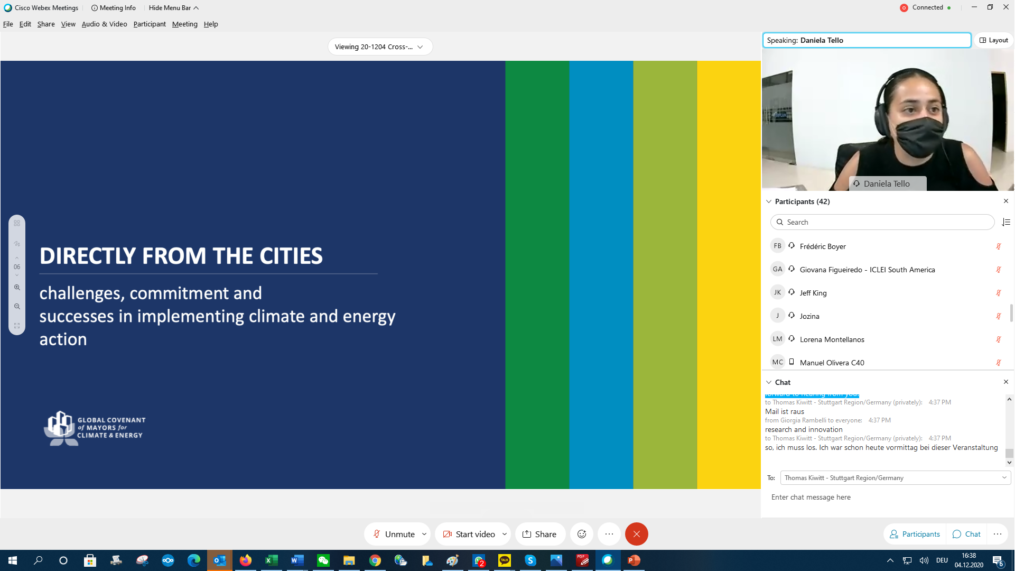 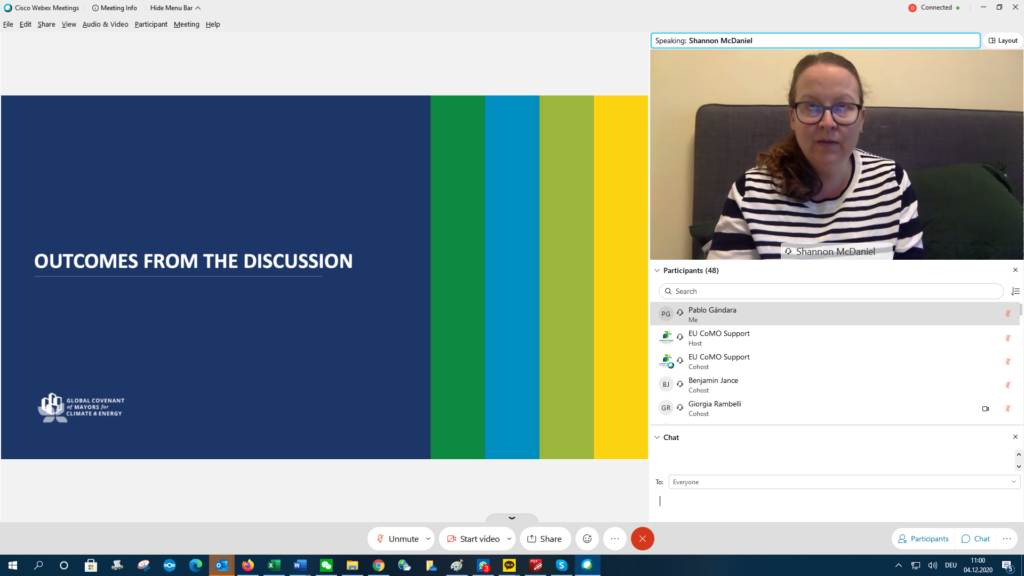