Today the IUC held its 4th (and final) City-to-City Event, reflecting on the progress made by the programme as a whole, which involved 166 participants from cities and regions across the globe. The conference provided an opportunity to celebrate successes, understand challenges faced and collectively discover solutions to overcome them. It gathered all experts involved in IUC within a single venue, a virtual one albeit, to acknowledge their diligent work in light of the difficulties encountered during this extraordinary year.

The project’s 82 city and 20 regional pairings across the globe help to find sustainable solutions to pressing development challenges. Through their cooperative work, they are accelerating climate action and leading local-level implementation of the Sustainable Development Goals (SDGs) and of the New/EU Urban Agenda. During today’s event, the IUC offered a last opportunity for all our cities and regions around the world to showcase their work and present their experiences to an audience of 140+ European and international representatives, including local and subnational authorities.

Interactive group discussions and networking opportunities gave participants the chance to exchange with one another, particularly by diving more deeply into two main thematic spheres:

Hilde Hardeman, Director and Head of Service for the EU’s Foreign Policy Instruments, welcomed the 140+ online participants and referred to the IUC as a flagship programme for localising the SDGs in cities. Opening remarks were given by Ellis Mathews of the European External Action Service, who pointed out that with the #EUGreenDeal, the EU will be looking at doubling the investment and efforts towards mitigating the effects of #climatechange.

The Plenary I session covered the topic Implementing a Green Recovery, moderated by Paulius Kulikauskas, Chief (Ag) of the Office for Europe and European Institutions, UN-Habitat. Presentations from several IUC cities shared insights on challenges, opportunities and common goals in sustainable urban development, especially in light of COVID-19 and related recovery efforts. Normunds Popens, Deputy-Director General of DG REGIO, delivers keynote at today’s #CityToCity2020 event, with the appeal, “We need to build on the knowledge and experience out there…I hope the new phase, IURC will be as successful as the IUC has been.”

Presentations from IUC city-to-city cooperation began with Dingxian Xiang, Deputy Director of Energy Saving Monitoring Centre, Wuhan, China. Located in central China, Wuhan is one of the nine central cities in China. It is a regional economic center for trade, logistics, S&T innovation and international exchange. The city has a population of 10 million inhabitants and a per capita GDP of 21,000 U.S. dollars. “The conference is also very high-level to share with other cities around the world how Wuhan copes with the epidemic and how to practice the post-epidemic green at the same time, seeking the future of cooperation” – he said. Wuhan, as the worst-hit area of the new epidemic, has made great efforts to overcome all kinds of difficulties. After 76 days in the city to control the outbreak, the economic restart, green recovery had a quick start – Mr Xiang said. He shared four guiding principles for the control of the pandemic, which Wuhan City has shared with UN-Habitat and can now be downloaded from its website (“COVID-19 Wuhan Guidance Papers-Emerging Experiences on Responding to COVID-19 in Chinese Cities and Townships“). Focusing on the green recovery, Wuhan has fostered the Yangtze River Economic Belt development and promotion strategy focusing on seven aspects: 1) Upgrading medical facilities, 2) Adapting sustainable urban development model including the urban refurbishment of old buildings and creating a 15-minute walk circle, 3) Promoting cultural tourism, creative arts, science and innovation, 4) Improving waste disposal and water supply, power grid, digital infrastructure (5G in the next 3 years) and green infrastructure (including a rainwater deep tunnel), 5) Investing in a healthy city to enhance the quality of the urban space for example through the construction of a hundred miles ecological and cultural corridor along the Yangtze River, and 6) Promoting the central region’s international gateway hub, the national high-speed rail network, and 7) Promoting the construction of functional areas. Mr Xiang stated that the Wuhan’s economy showed a quarter-by-quarter accelerated recovery trend, returning to the top 10 in the country based on the GDP. Mr Xiang invited European cities to cooperate with Wuhan through different mechanisms and forms in order to share urban development opportunities.

Akinori Nakagaki, Director of Transportation Policy, Urban Maintenance Department for the city of Toyota (Japan) explained how they put into place a number of new, innovative solutions across fields including mobility and digital solutions. To make sure these become long-term solutions, partnerships with the private and public sectors is critical. Also presenting were Banchanidhi Pani, Municipal Commissioner; Surat, India and Francesco Vescovi, Senior Officer for Urban Planning, Milan, Italy.

There were three parallel Sub-plenary I sessions, focusing on Cities implementing a green recovery on the ground. These sessions explored the challenges and topics of global concern arising from the recent COVID-19 pandemic and subsequent recovery efforts. Smart innovation, the changing urban environment, and financing solutions were discussed, featuring insights from IUC cities and highlighting their replicable pilot actions. One sub-plenary touched upon the solutions and experiences from cities in the IUC program in regards to smart and digital solutions to drive a green recovery. Providing an example, Yohei Watanabe presented the city of Koriyama (Japan), which set up an emergency economic package with financial aid for SME and crowdfunding in the hospitality sector. It also used digital tools to organize online job fairs. Josephine Tan of Penang (Malaysia) shared their experiences on digitalization for sustainability, like the Trash2Treasure mobile app and the Zero Waste Network connecting users and service providers. Sébastien Viano of Nice (France) shared their measures on city security via technological solutions like the alert button system available in public buildings and emergency call points in the public highway. Finally, Stjepan Ćavar from the city of Dubrovnik (Croatia) shared their solutions on using Artificial Intelligence to modulate tourism inflow in the city centre and a smart parking app to improve traffic.

The second parallel session of Sub-plenary I discussed the topic of Changing the urban system — how to redesign cities post-COVID, with: Gang Hou, Executive Deputy Mayor, Liuzhou, China; Cecilio Cerdán; Director-General, Cooperation and Global Citizenship, Madrid, Spain; Jean-Charles Lerdic, Head of Foresight Department; Marseille, France. In his speech, Liuzhou’s Executive Deputy Mayor Gang Hou referred to the long history of the city (more than 2000) as well as to the tourist and cultural heritage. Liuzhou is also an important integrated transportation hub city in southern China and an important channel city for China to move into ASEAN. Liuzhou has a unique industry in the southwest region of China including steel, automobiles, machinery and renewable energy. “Since 2018, Liuzhou has been a pilot city of China-EU regional policy cooperation. I am delighted that we have signed 17 memorandums of cooperation with European cities in areas including urban development, industry, education, science and technology, and other fields” – he said.  Liuzhou city shared its experience on fighting the epidemic in April this year, along with several EU cities including Barcelona, Rome, Mannheim and Granada (see here). “During the outbreak, Liuzhou sought and controlled the infection source, cut off the route of transmission, protected vulnerable people, deployed a comprehensive medical treatment and wide information campaign. (…) From mid-February to the present no new infections have been found” – Deputy Mayor Hou said. Liuzhou implemented several initiatives to support enterprises’ industrial chain recovery – he said. After the resumption of the market, Liuzhou’s economic operation is gradually back on track. From the overall and long-term perspective, Liuzhou’s sustained and healthy economic development strategy has not changed – he stated. Mayor Hou introduced Liuzhou’s five sustainable development urban principles for the post-epidemic era, namely 1) Building a healthy and safe city to improve the response to major public health emergencies, 2) Accelerating the construction of digital cities and build a smart city system including urban and rural integration, 3) Promoting social integration, i.e. the protection and improvement of people’s livelihood, 4) Accelerating economic innovation growth poles points in the city’s pillar industries (automobiles, steel and machinery), and 5) Promoting the deep cooperation between Liuzhou and European cities. Deputy Mayor Hou referred to pilot projects between EU cities and Liuzhou stating that these platforms will promote win-win cooperation. Mayor Hou invited representatives from European cities, businesses and academia to participate in different forms of cooperation and exchanges.

In his video message to conclude the morning session Dr Ronald Hall, senior advisor to the Directorate General for Regional and Urban Policy provided an overview of the achievements of IUC in the field of city-to-city cooperation and looked forward to the next generation of the programme beginning in 2021.  He congratulated the city representatives on the quality of their presentations in the morning session, which showed the engagement and enthusiasm they had brought to the serious challenges which the IUC programme was seeking to address. He noted that cities appeared to have moved on from the sustainable agenda to a sustainable and inclusive one, provoked in part by the impact of the global pandemic of 2020 on society.

He drew attention to how, in its revised budget, the EU is preparing for a major recovery programme post-COVID with a combination of grants and loans and for, notably, a new Green Deal. He said that decentralised intervention will remain a key element in order to mobilize the imagination and capacities of regional and city actors from the public and private sectors inside the EU. But international cooperation among regional and local actors will continue to play an important role in the recovery, notably through the new International Urban and Regional Cooperation programme. He said that it was his view that now was the moment to think about how to seize the opportunities as well as address the many challenges, and to work together, including under IURC, towards a more sustainable and inclusive model of regional and urban development.

Closing remarks were moderated by Giorgia Rambelli, Head of the IUC Coordination Unit, who introduced Andries Gryffroy, Commission for the Environment, Climate change and Energy, Committee of the Regions. Mr Gryffroy, who praised the great work done by the IUC teams in spite of COVID. He further stated, “Regions and cities must be involved in the definition and implementation of their national plans and should get easy access to funding. What we need is a global green deal that broadens the reach of regulatory, fiscal and financial frameworks though effective multilateral mechanisms, calibrated to meeting the overarching goals of social and economic stability, shared prosperity and environmental sustainability by the end of the current decade. A global green deal.”

Ramon López, Policy Coordinator for International Relations, DG Regional and Urban Policy closed with covering the results from the IUC programme and outlook to the future. Results include 82 city-to-city pairings, 20 region -to-region pairings, 79 urban cooperation action plans, the development of 20 RIS3. This was carried out over 150+ capacity building sessions and events, including 900+ participants t the 4 editions of the IUC city-to-city event. Mr. López addressed future developments and the handover to the IURC, which will start next month in January 2020, adding several countries to the scope of the current IUC programme. This includes the addition for the city-to-city sustainable urban development, the countries of: Indonesia, Malaysia, Rep. of Korea, Thailand, Vietnam. Also, for the region-to-region cooperation in innovation, the addition of China and Japan. Mr López concluded by expressing his appreciation to all of the speakers, participants today and IUC city representatives, adding “Thanks to all the IUC technical teams in the different regions, led David Calvo in North America, Sandra Marin in Latin America, Panagiotis Karamanos in India, Pablo Gándara in China, Hidefumi Imura in Japan and Georgia Rambelli in Brussels. Hope to see all of you again in IURC!” 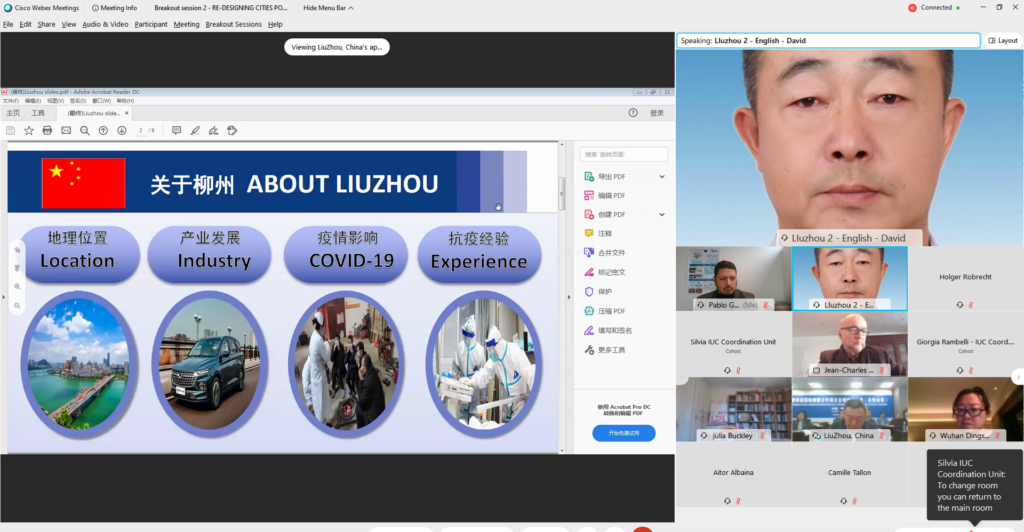 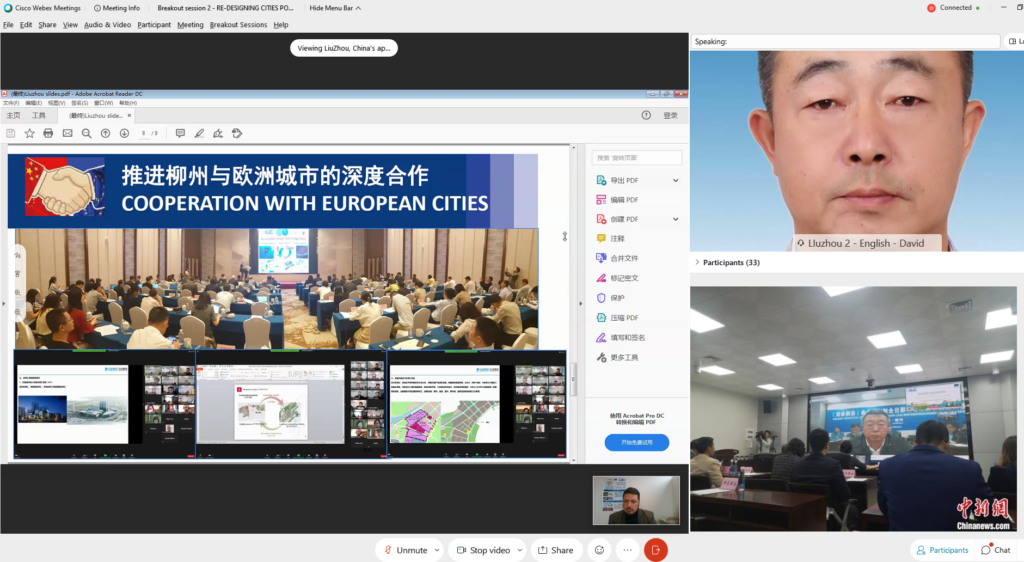 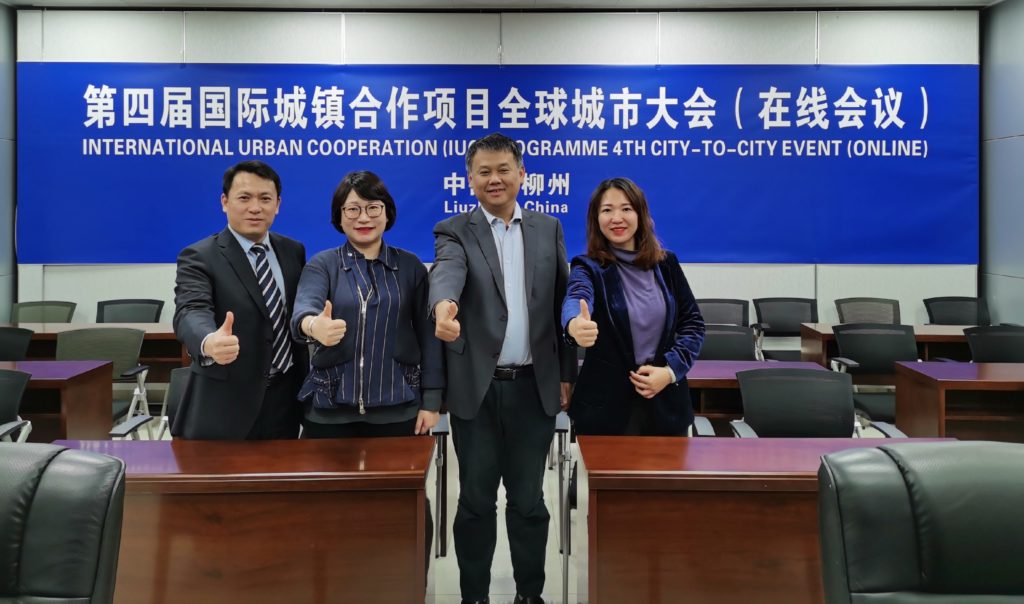 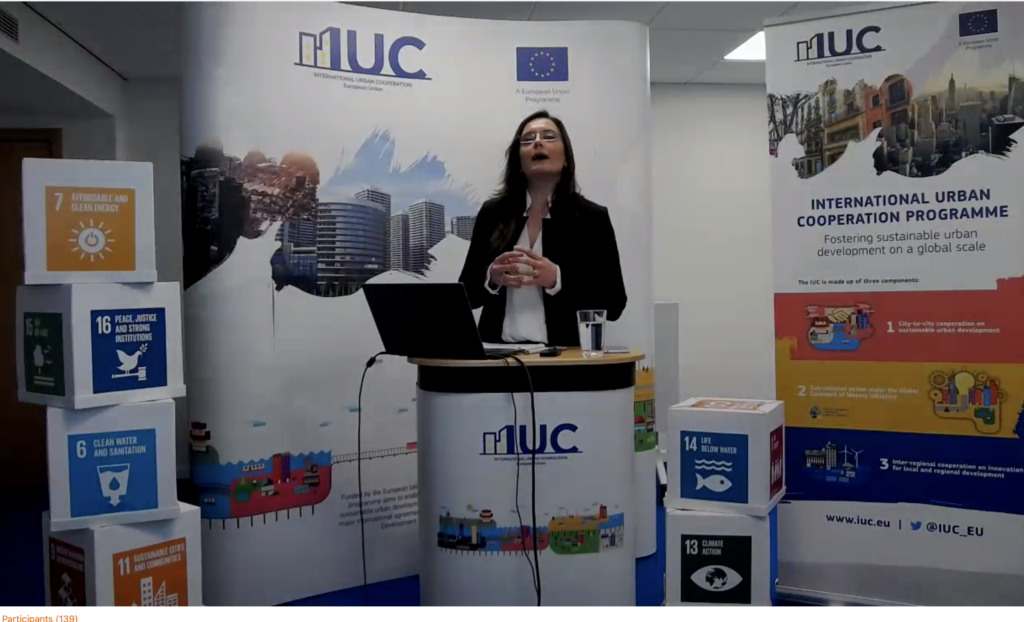 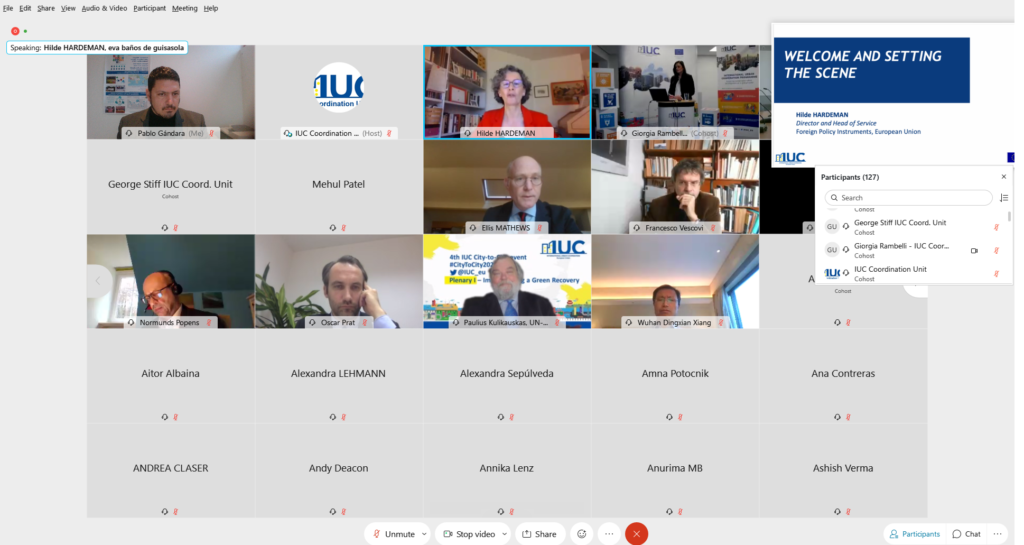