The IUC-Asia programme held an online session today with Chinese and European experts in preparation of a large workshop scheduled to take place in China in September 2020 (TBC). At that workshop, the purpose will be to exchange policy views and best practices on resilience and adaptation to climate change, with a focus on green infrastructure and sponge city solutions.
Today’s online discussion provided a platform for the experts to debate the differences between resilient and sponge cities in China. Manuel Carmona kicked-off with his presentation on the European Green Deal and New EU Adaptation Strategy. He laid out European Climate Pact to transform the EU’s economy for a sustainable future, while leaving no one behind. Mr Carmona discussed some key pillars of the plan, such as supplying clean, affordable and secure energy and building and renovating in an energy and resource efficient way. He touched on a zero pollution ambition for a toxic-free environment, and accelerating the shift to sustainable and smart mobility. Preserving and restoring ecosystems and biodiversity as well as a “Farm to Fork”, fair, healthy and environmentally friendly food system is also a priority.
Mr Zhang, General Manager at Ewaters Environmental Science & Technology, presented next and noted that sponge cities are focussed on water resources in urban areas, while the concept of resilience encompasses other climate change impacts. In Europe, we also refer to green-blue infrastructure as the interventions aimed at retention and re-use of major rainfall events.
Professor Zheng of the Institute of Urban & Environmental Studies (IUE) at the Chinese Academy of Social Sciences (CAS) expressed interest in knowing potential adverse health effects of water retention pools, such as the increase of mosquito-transmitted diseases. Mr. Innocenti (University Iuav of Venice and University of Copenhagen – IUC Asia Resilience Expert) replied that resilience adaptation needs to be localized: what works in Copenhagen or Rotterdam might not work in cities with different climates, which are prone to insect infestation.
The criteria used to classify different adaptation zones and vulnerability areas in China, Professor Zheng further explained, results in more vulnerable areas in Western China. The reason is a stronger socio-economic resilience and disaster preparedness in Eastern China cities. Mr. Innocenti stated that in order to set baselines for adaptation measures, Copenhagen is a good example, as monitoring of the solutions takes place. There is not enough data yet to be able to measure the prevented losses thanks to adaptation infrastructure.
During the Q&A portion of the call, Mr Daussa (IUC-Asia, Lead Expert Cities and Climate) inquired about the guidelines for the sponge city in Suquian and Mr Zhang explained that those were developed specifically for the city pilot projects, as adaptation measures need to be tailored to the geographic and climate-related challenges. Professor Zheng requested more resources in city resilience and monitoring best practices. Mr. Gándara (IUC Asia, Team Leader) presented several publications partly available in Chinese with the summaries and examples of climate adaptation in Europe. He also explained the “EU Going Neutral 2050” strategy which is available in Chinese and includes clear steps for achieving a climate-neutral economy.
Since 2019, the IUC-Asia project has been cooperating with the Institute of Urban & Environmental Studies (IUE) at the Chinese Academy of Social Sciences (CASS) on resilience to climate change. In September 2019, the IUC-Asia project experts drafted a chapter for China’s Annual Report on Actions to Address Climate Change 2019, China’s flagship publication on climate action. The chapter contributed European policy experiences to adaptation (EU policies and tools), in addition to best practices from European city case studies. The annual report is written for top-level national and regional level key policy makers in the field of climate change. It has been recognized as the most influential academic report on summarizing the latest international policies/actions on climate change, as well as the analysis of policies and practices in China.
Additionally, the IUC-Asia and CASS jointly organised two workshops on Resilient Cities last year:
– Adaptation in Haikou on 25 October 2019;
– Resilient Cities in Guangyuan in December 2019, involving 100+ Chinese experts.
Presentations
00 IUC Intro and Agenda Snapshot
00a Carmona – CASS webinar Resilience and adaptation to climate change – points MCY
01 Zheng – Climate-resilient cities in china
02 Zhang – Suqian Sponge City- compressed
03 Innocenti – Green infrastructure_webinar_28may2020_alberto_innocenti
04 Pelizzaro NEW IUC – Milan and Paris
05_EU JRC Climate Impact in Europe 2018
06_EU Going Climate Neutral 2050.zh (Chinese)
Impressions 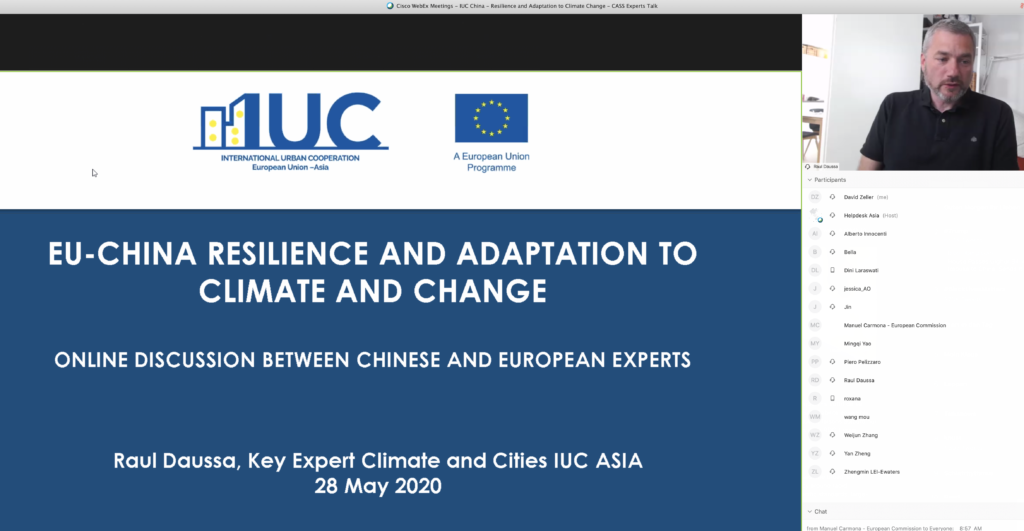 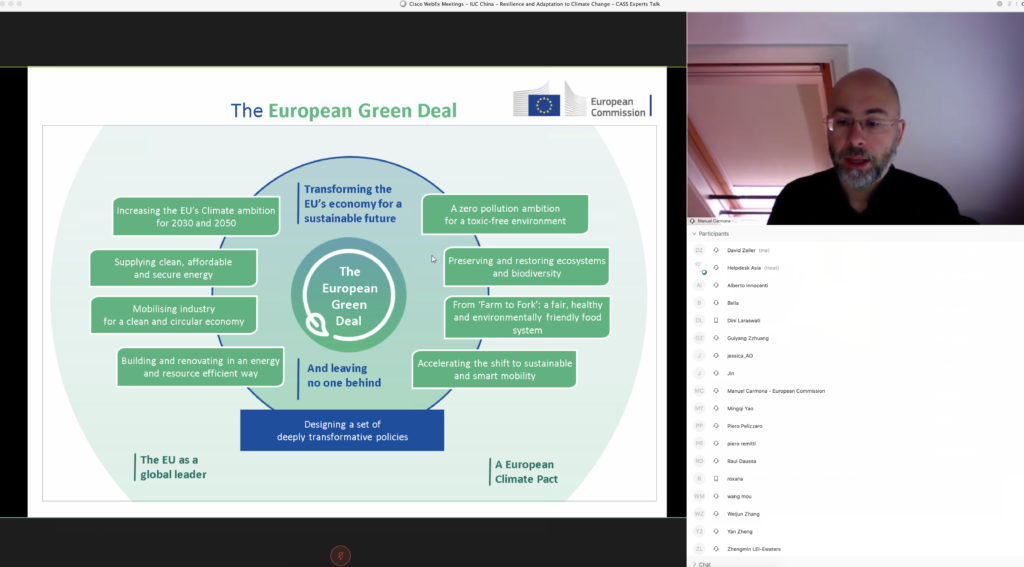 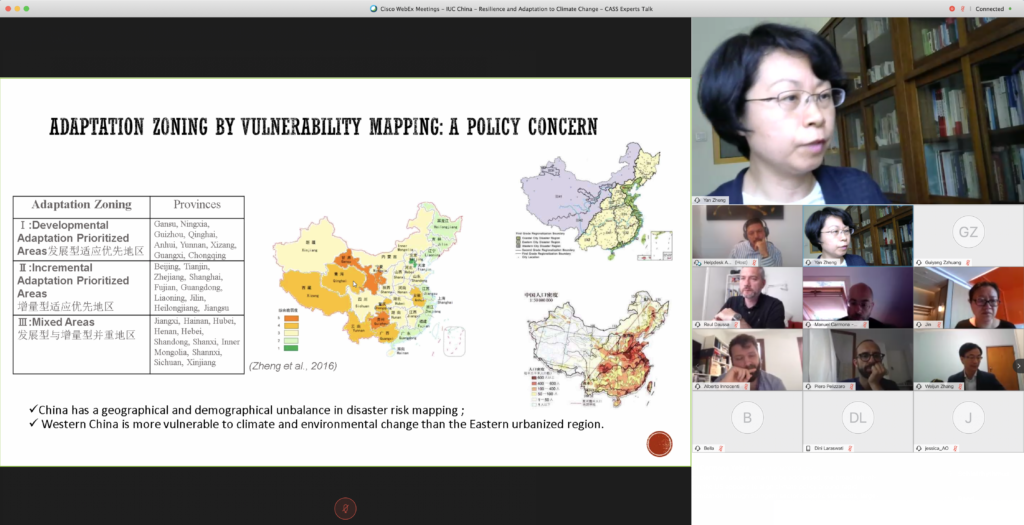 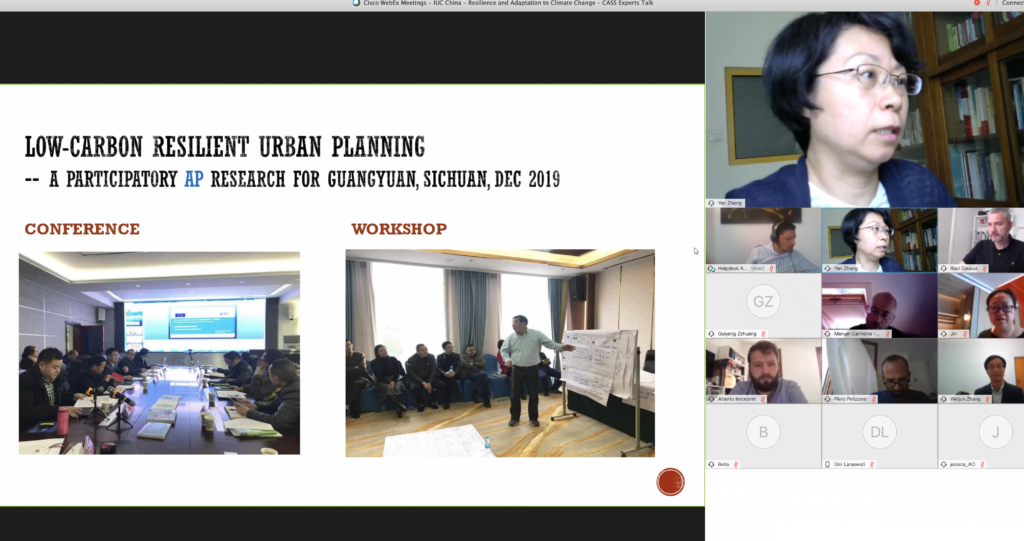 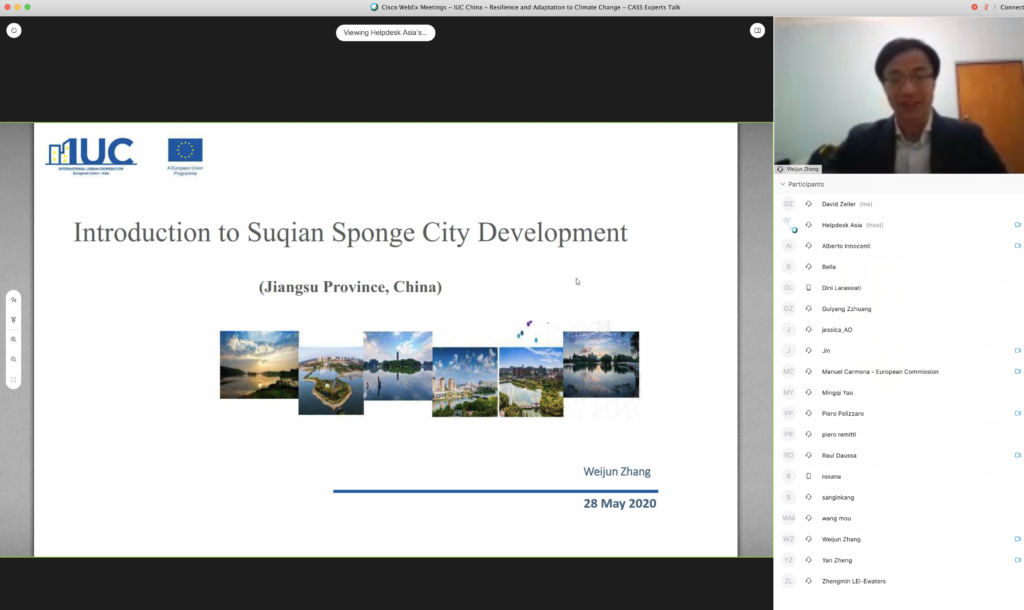 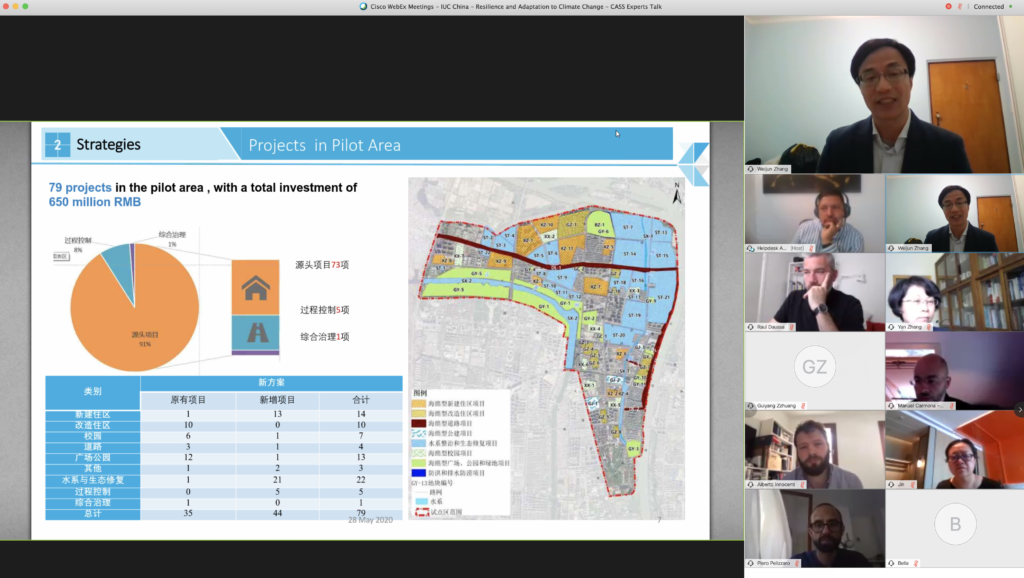 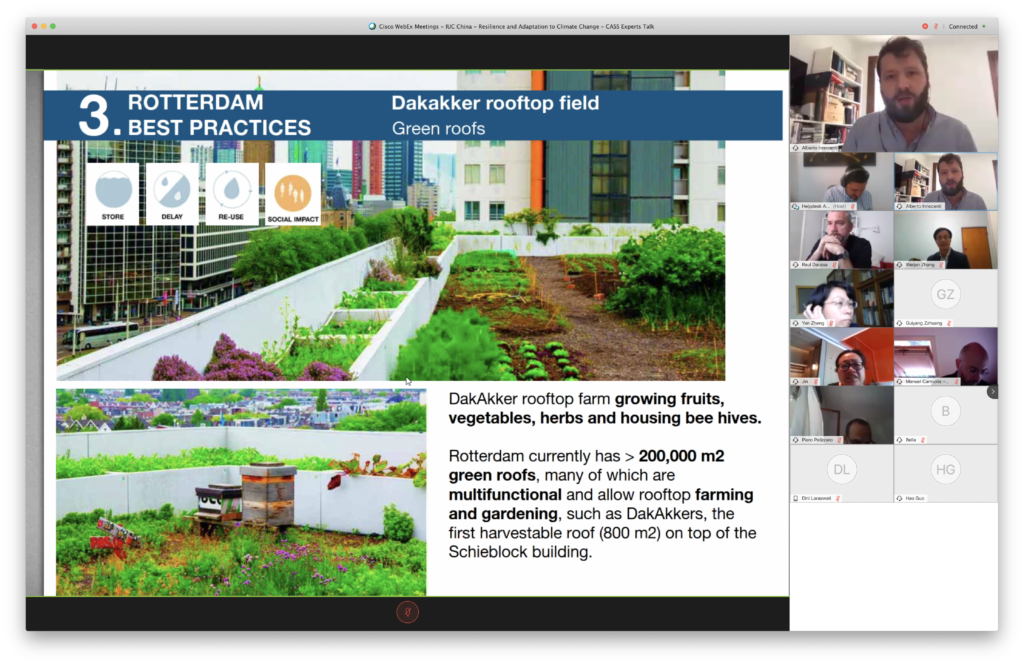 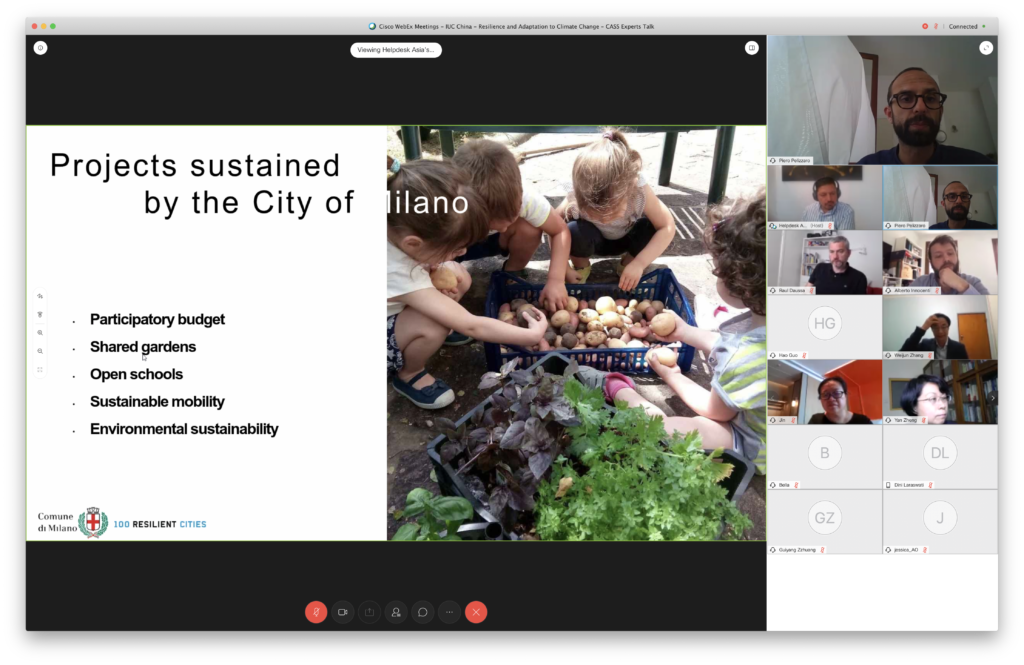 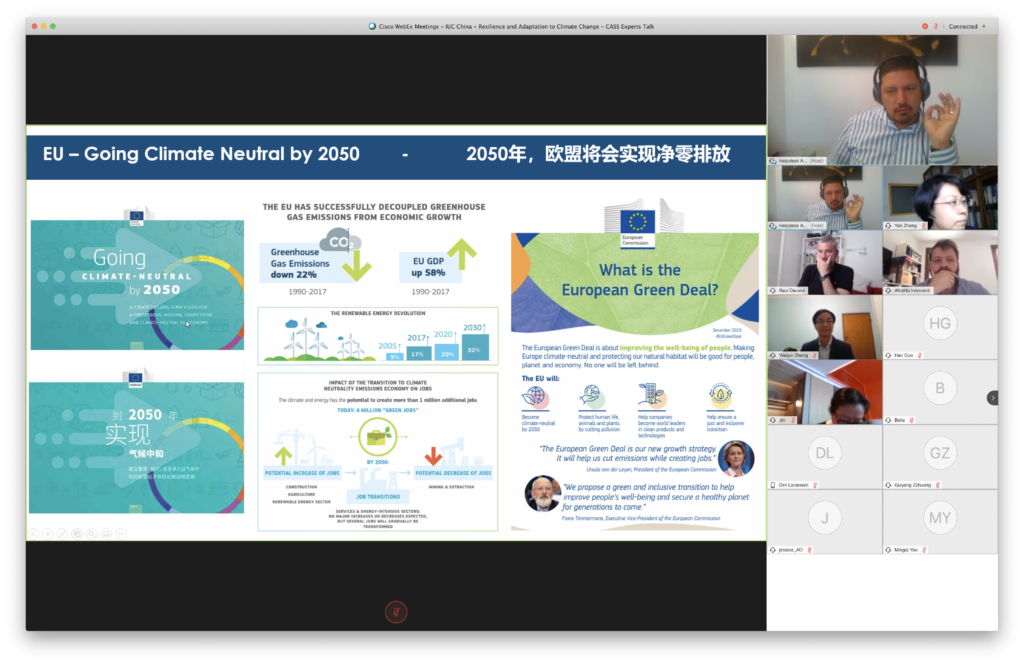 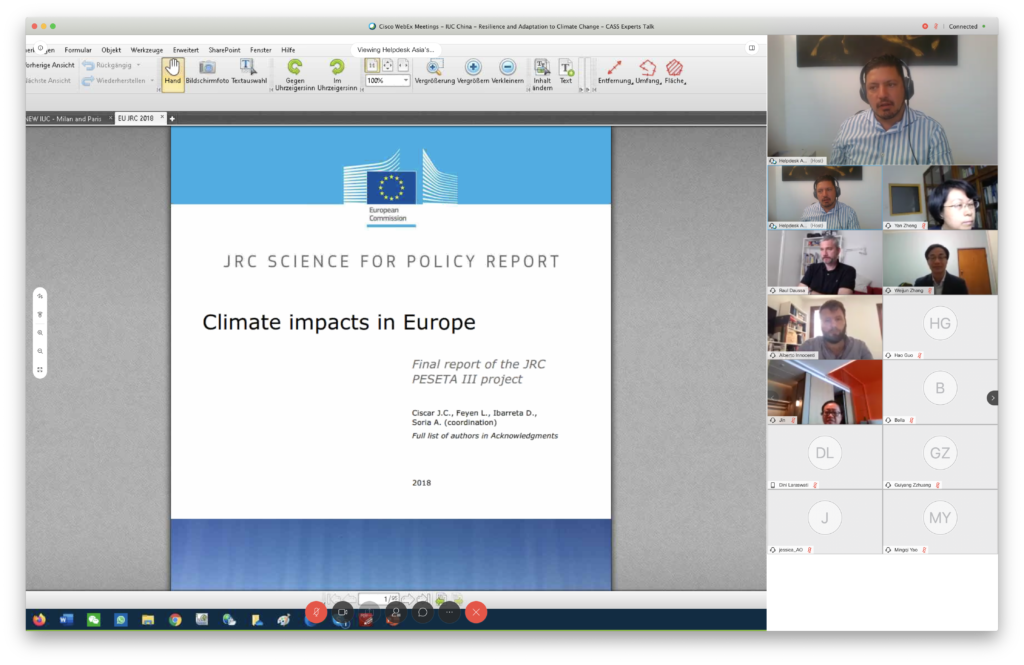 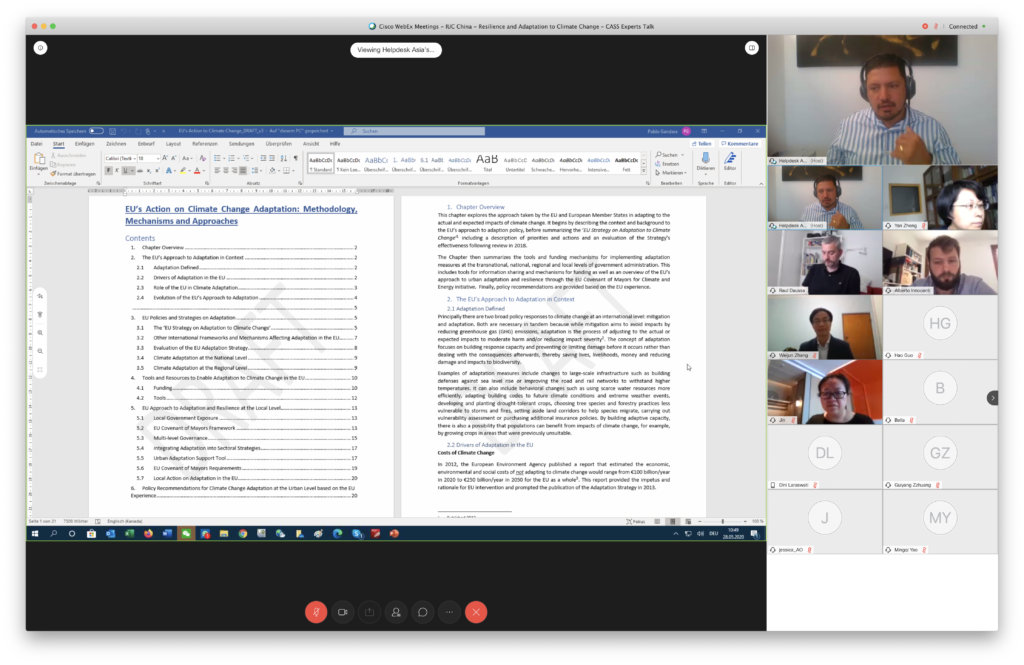