Today, the IUC Asia project held its final webinar on Technical Assistance on Climate-Action-Plans Development in Indonesia with more than 125 participants. In discussion were the so called “final products”, the Climate Action Plans and respective lessons learned during the process of developing them for the pilot cities of Palembang, Denpasar, Depok, Malang and Makassar. Also presented were the results of a mid-term monitoring webinar, reviewing emerging needs and challenges for future EU cooperation policies.

The event, which was opened by H.E. Ambassador Vincent Piket, Head of the EU Delegation to Indonesia, included the participation of the EU’s Foreign Policy Instrument (FPI), the European Commission’s (EC) Directorate-General for Climate Action (CLIMA) and the Ministry of Environment and Forestry of Indonesia (MoEF). The IUC Asia technical team organised the webinar with further participation from technical partners to the South East Asia GCOM Secretariat (UCLG ASPAC, CDP, C40, UN-Habitat, ICLEI).

H.E. Vincent Piket, Ambassador of the EU to Indonesia provided the opening greetings. “I am glad to see that the work started in 2019 has continued in 2020, even when the COVID19 pandemic forced us to work online. I commend the task of our implementing partners, to be able to accomplish the objectives set in our project and I am looking forward to a continued cooperation and successful implementation of the climate action plans in the future,” the Ambassador stated. He added that the EU in Indonesia will continue to monitor the support provided in future programmes, mainly in the forthcoming project to support the Global Covenant of Mayors for Climate and Energy in Asia. “The EU is at the forefront of the fight to avert the worse consequences of climate change, and its foreign policy is aligned with those objectives,” he added.

Further welcoming remarks were given by Dr. Ir. Ruandha Agung Sugardiman, Director General of the Climate Change Department at the Ministry of Environment and Forestry of Indonesia, who thanked the EU’s IUC for carrying out today’s activities in an effort to increase the capacity of greenhouse gas inventories. “This joint effort towards real action in controlling climate change….by sifting through information and exchanging experiences related to the implementation of the design of urban climate action plans, will help to provide the maximum benefit in mitigating the effects of climate change.” With regard to the COVID-19 pandemics, he added that “in this new normal era, it needs to be encouraged that each individual has a more efficient habit through the home office scheme (…). In addition, it needs to be comprehensively encouraged to lead to more environmentally friendly behaviors in the long term, including incentive mechanisms for those who have changed their behavior,  especially in anticipation of waste-production due to increasing consumption”.

Manuel Carmona Yebra, from DG CLIMA of the EU Commission, addressed Climate and Energy Cooperation as a Driver to Combat Global Challenges. Mr. Carmona laid out the strength of the European Green Deal, as a blueprint to align Europe with the Sustainable Development Goals and the Paris Agreement, aiming for Climate-neutrality by 2050. He stated, “Circular economy, biodiversity, food, mobility, etc., are crucial to adopting a 360° approach in order to reduce all sources of emissions – and make us healthier. Equally important is the social and fair dimension that we want the Green Deal to pursue, making sure no one is left behind. We are setting up a Just Transition Fund.” He also referred to two EC initiatives to be launched soon: 1) The Climate Pact – a bottom-up initiative based on a triple helix approach with the engagement of public authorities, education, companies; and 2) The EU Adaptation Strategy, with a much stronger element of international cooperation.

Mr Carmona welcomed Indonesia’s submission to the UNFCCC on adequacy and effectiveness of adaptation and support, while praising the good job of the five pilot cities in Indonesia, regarding plans that cover all aspects of climate action, including mitigation, adaptation and access to clean energy. He pointed out the need for sustainable finance, since public funds will never be sufficient to finance the green recovery and transition to a climate-neutral, resilient economy. The EU is also working on revising non-financial reporting requirements for companies to capture more climate and environmental issues—this will formalise the suggestions of the Financial Stability Board’s Taskforce on Climate-related Financial Disclosures. Mr Carmona pointed out how the EU, in partnership with other countries, has established an International Platform on Sustainable Finance to enhance international cooperation, for which Indonesia became member this year. He ended his talk with the reminder, “The heart of the EU Green Deal is to make sure we have an economy that works both for people and for nature.”

Dr. Bernadia Irawati Tjandradewi, Sec. Gen. of UCLG ASPAC (GCoM SEA Secretariat) presented the topic: Cities Take an Important Part of Tackling Climate Change and thanked the EU and the IUC partners for their effective work during the elaboration of the Climate Action Plans plans. Dr. Rizaldi Boer (CCROM) explained the climate action planning process, addressed the key results of the GHG baseline emissions inventories (BEIs) and the risk vulnerability assessments (RVAs) – both produced with EU support. He addressed few challenges including data sharing & collection, staff discontinuity in cities, the cities’ limited technical capacity for climate monitoring, limited human resources and financial for upscaling the climate actions. He also referred to the strong commitment of the Indonesian pilot city governments, the intensive communication and consultation with city stakeholders, as well as to the pros and cons of online consultations within the COVID-19 context.

The Climate Action Plans (CAPs) were briefly addressed from representatives of the following pilot cities: Palembang, Denpasar, Depok, Malang and Makassar. They referred to the substance of the CAPs (challenges, actions) as well as to the process of their elaboration (stakeholders engagement, cross-sectoral cooperation) and to their expectations on the next steps. Cities representatives mentioned several lessons learned, including the added value of harmonizing the national mitigation and adaptation platforms (SIGN SMART and SIDIK respectively) with the GCoM Common Reporting Framework (CRF), the importance of synchronising/integrating mitigation and adaptation actions into the city’s strategic development strategies, the need for international cooperation through technical training and the better understanding to climate change vulnerability through the CAP-making. They referred to several examples to raise awareness and engage with civil society.

Dr. Eleonora Lo Vullo from the EU Joint Research Centre (JRC) referred to the technical dialogue with the Indonesian technical partner CCROM to achieve coherence between the national reporting frameworks (SIDIK for adaptation and SIGN SMART for mitigation) and the GCoM’s CRF (see above). She concluded that in order to make the mitigation platform SIGN SMART compatible with the CRF, a higher level of data disaggregation in transport and energy sectors is needed. Also, GHG reporting should be made compulsory for city level as well (so far at provincial level). Indirect emission reporting and should be included, for example, based on data deriving from the consumption of grid-supplied energy. She also mentioned that – in order to make SIDIK compatible with the CRF – more hazards should be included (so far only two mapped, drought and flood). Also, the scale and unit of analysis for the adaptation framework needs to integrate cities and the regions surrounding them. Climate change impacts on a specific area/city can have repercussions (physical, social, economic) on surrounding areas. Therefore, an integrated approach that considers interfaces, surroundings and relations is necessary to build an adaptation strategy.

In addition to today’s focus on the 5 Indonesian Pilot Cities, the IUC Asia program of the European Union has provided technical assistance (TA) to a further 8 pilot cities in Malaysia (Penampang, Tawau, Muar, Kampung Baru and Hang Tuah Jaya) and Viet Nam (Can Tho, Da Nang and Tam Ky), helping the development of their Climate Action Plans (CAP) according to the Global Covenant of Mayors Common Reporting Framework (GCoM CRF). CAPs will show the cities’ commitments to address climate change by reducing greenhouse gas (GHGs) emissions, adapting to the impacts of climate change, and delivering wider social, environmental and economic benefits.

The Technical Assistance is being implemented through cooperation with the following technical partners: Centre for Climate Risk and Opportunity Management in Southeast Asia Pacific (CCROM-SEAP) in Indonesia, Universiti Teknologi Malaysia-Low Carbon Asia Research Centre (UTM-LCARC) and CDP in Malaysia and UN-Habitat and CDP in Viet Nam. The technical support given to the pilot cities is comprised of step-by-step training and knowledge sharing on how to develop each essential component of a CAP, namely baseline GHG emissions inventory, target setting, climate risk and vulnerability assessment (CRVA), monitoring/verification, and climate finance options/implementation. The CAPs are expected to be accomplished by the end of 2020 and may become references for replication in other GCoM cities.

[1] The National GHG Inventory System (SIGN SMART), developed by the Ministry of Environment and Forestry (MoEF) of Indonesia 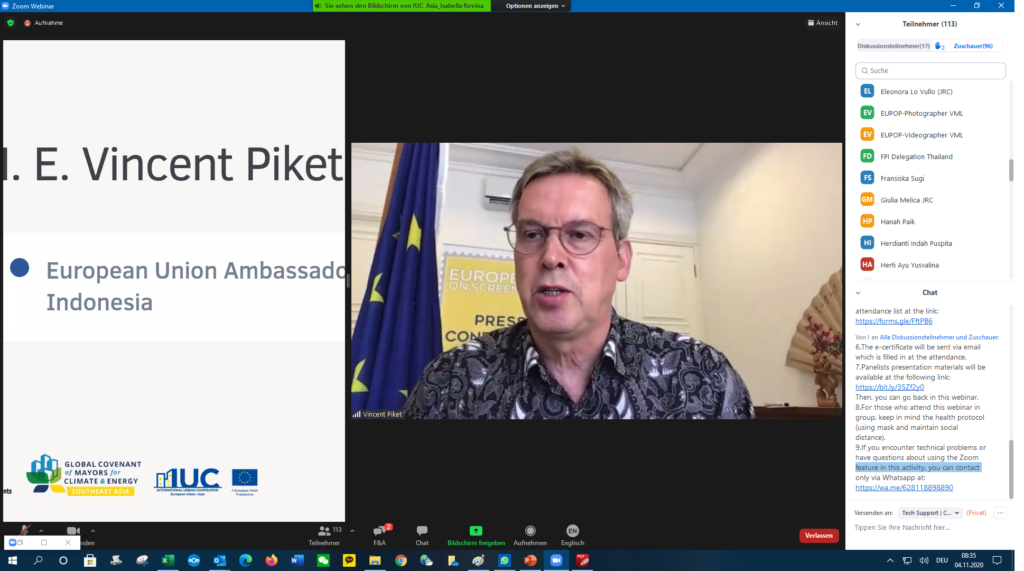 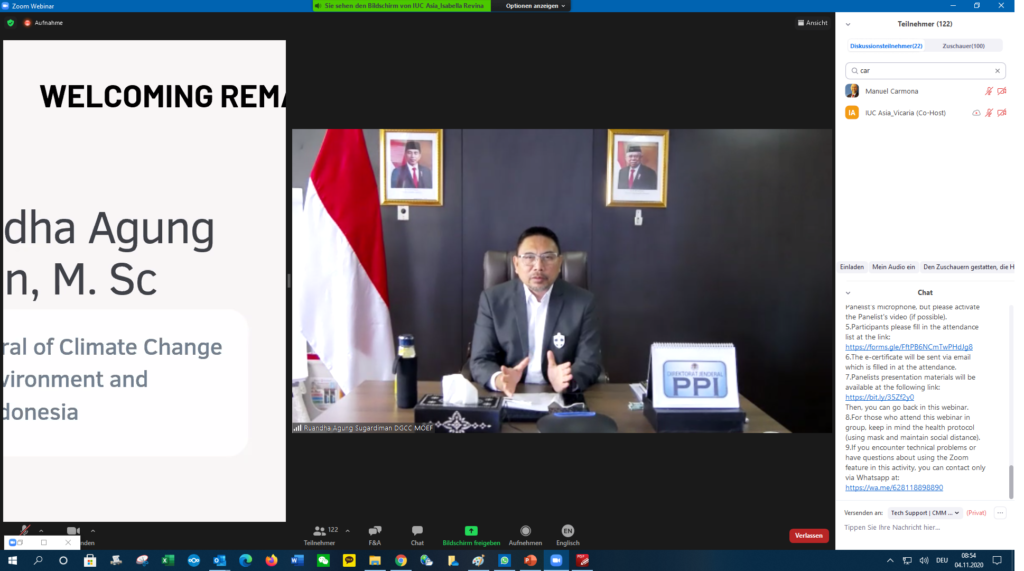 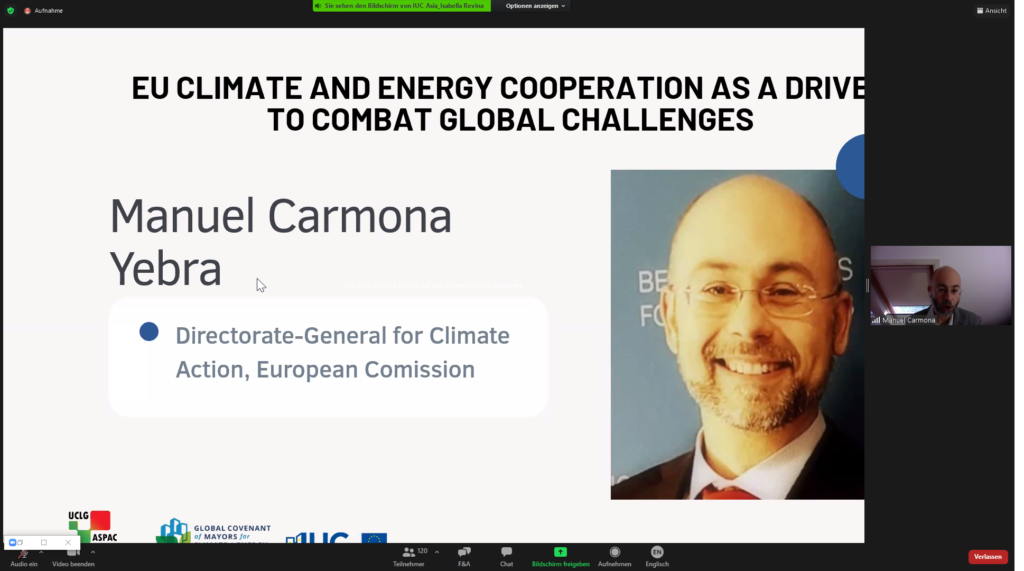 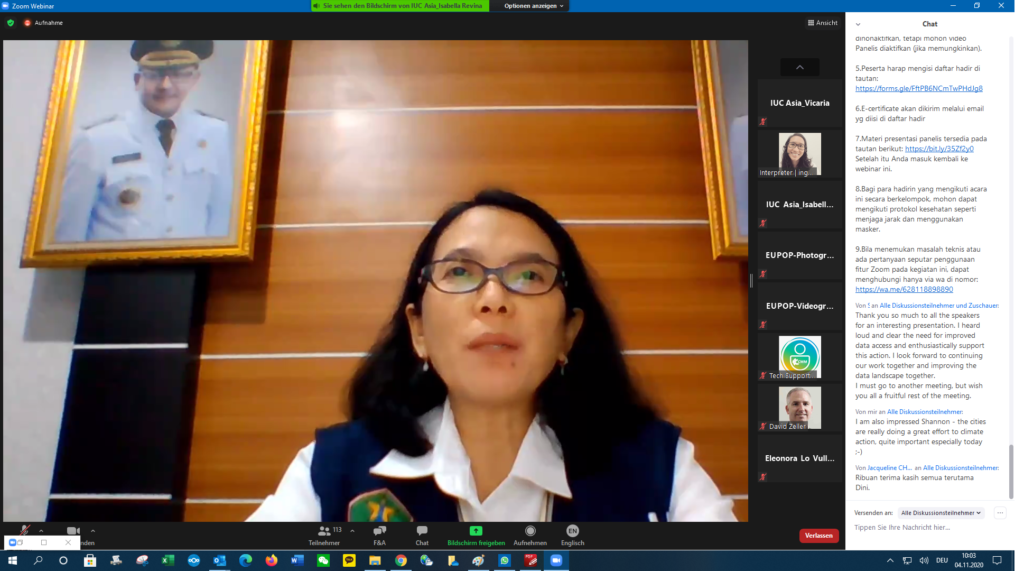 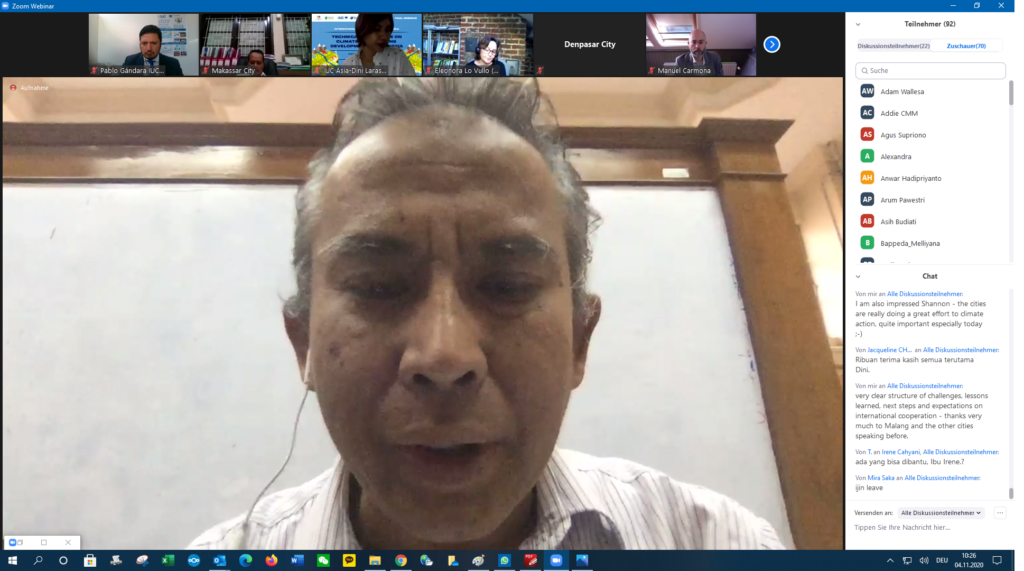 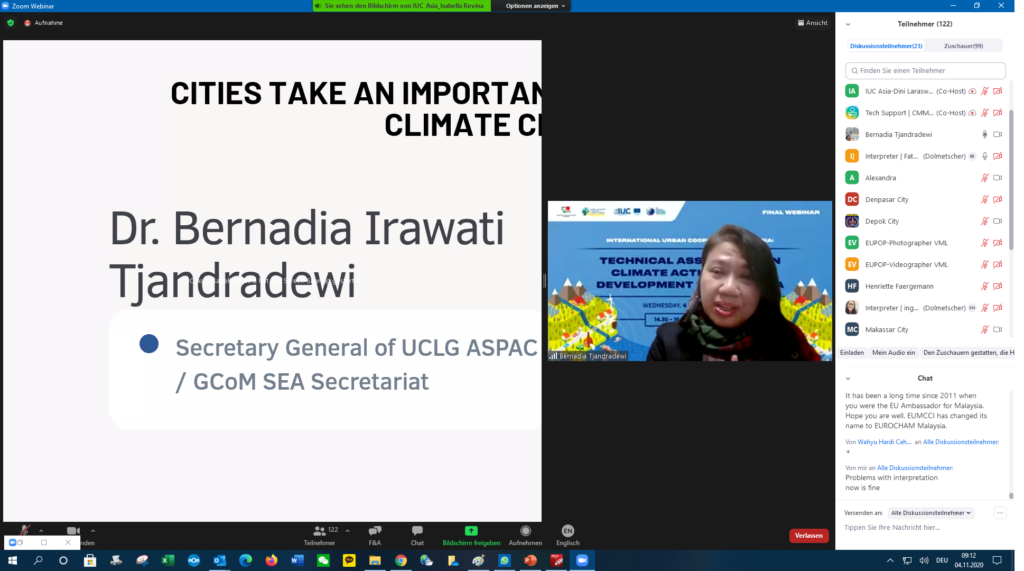 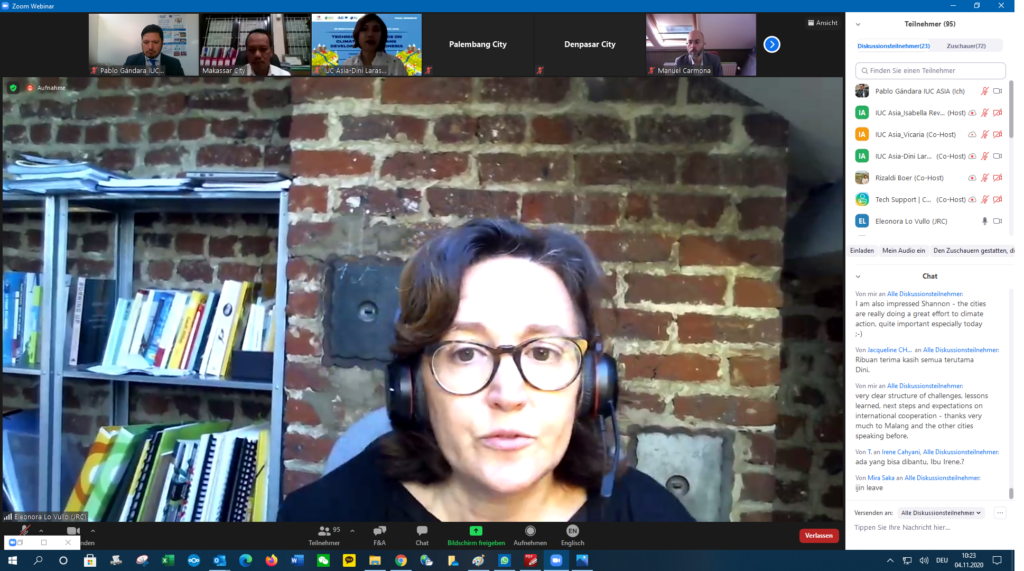 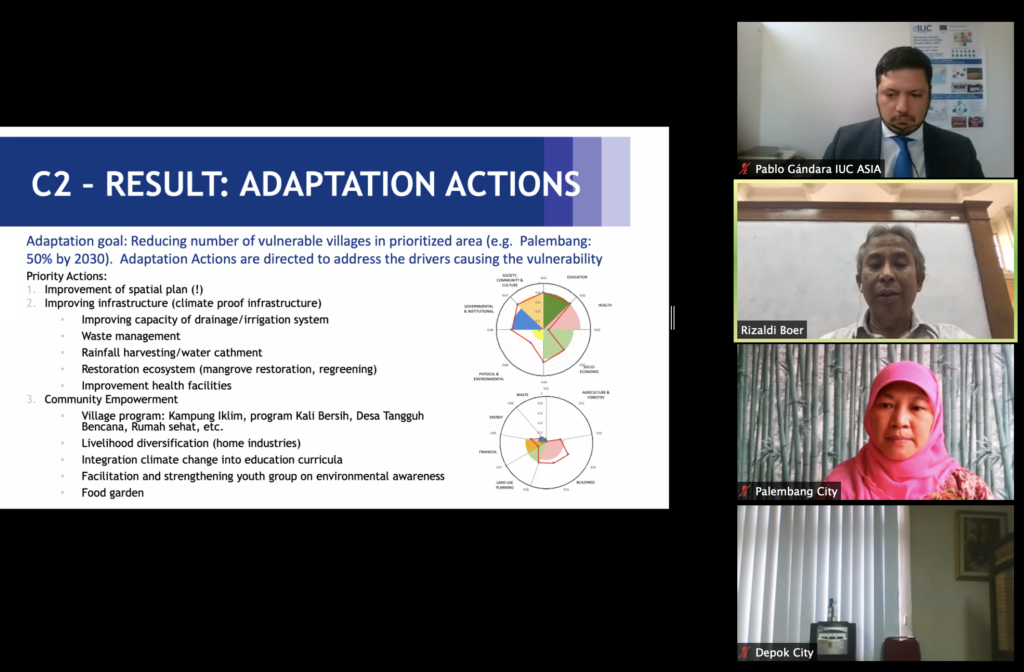 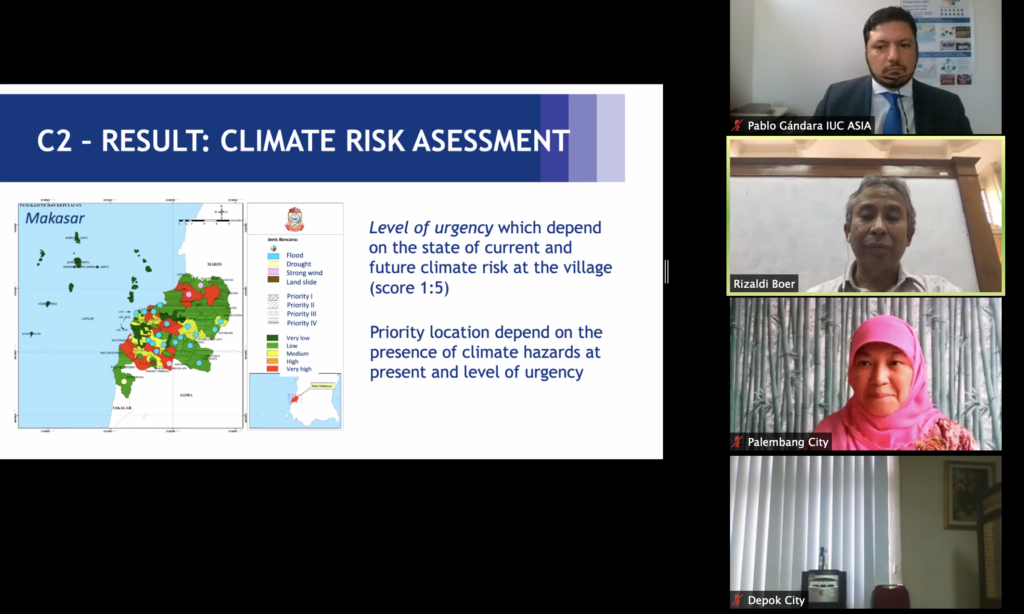 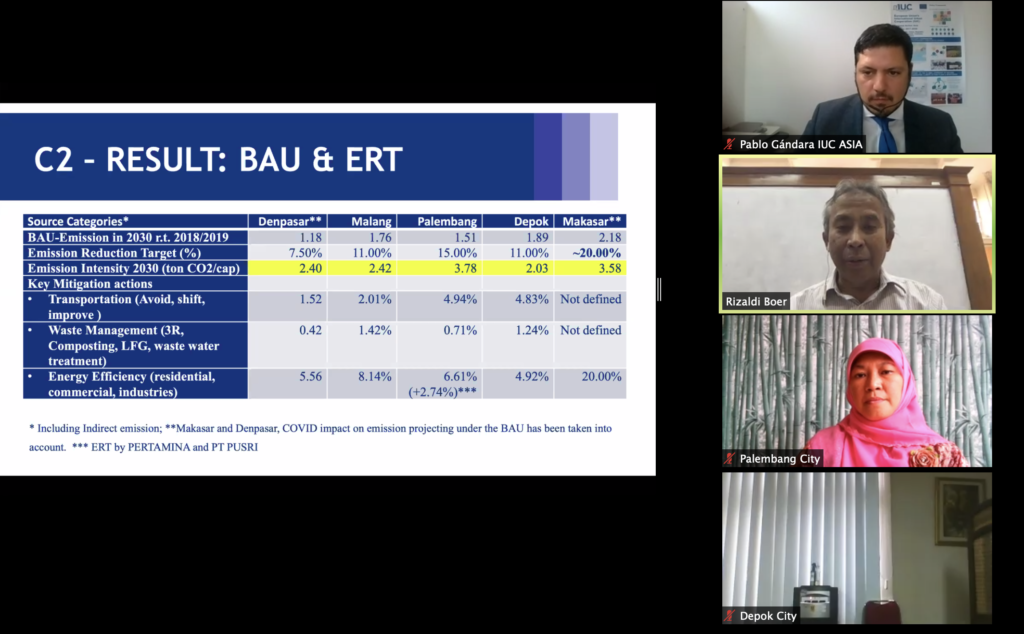 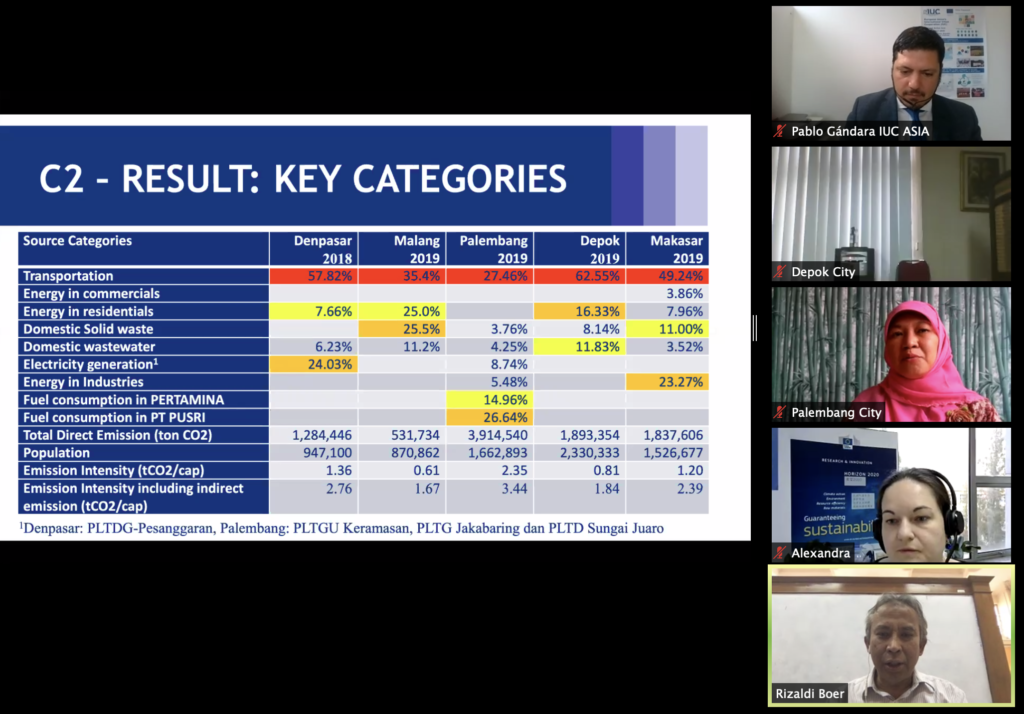 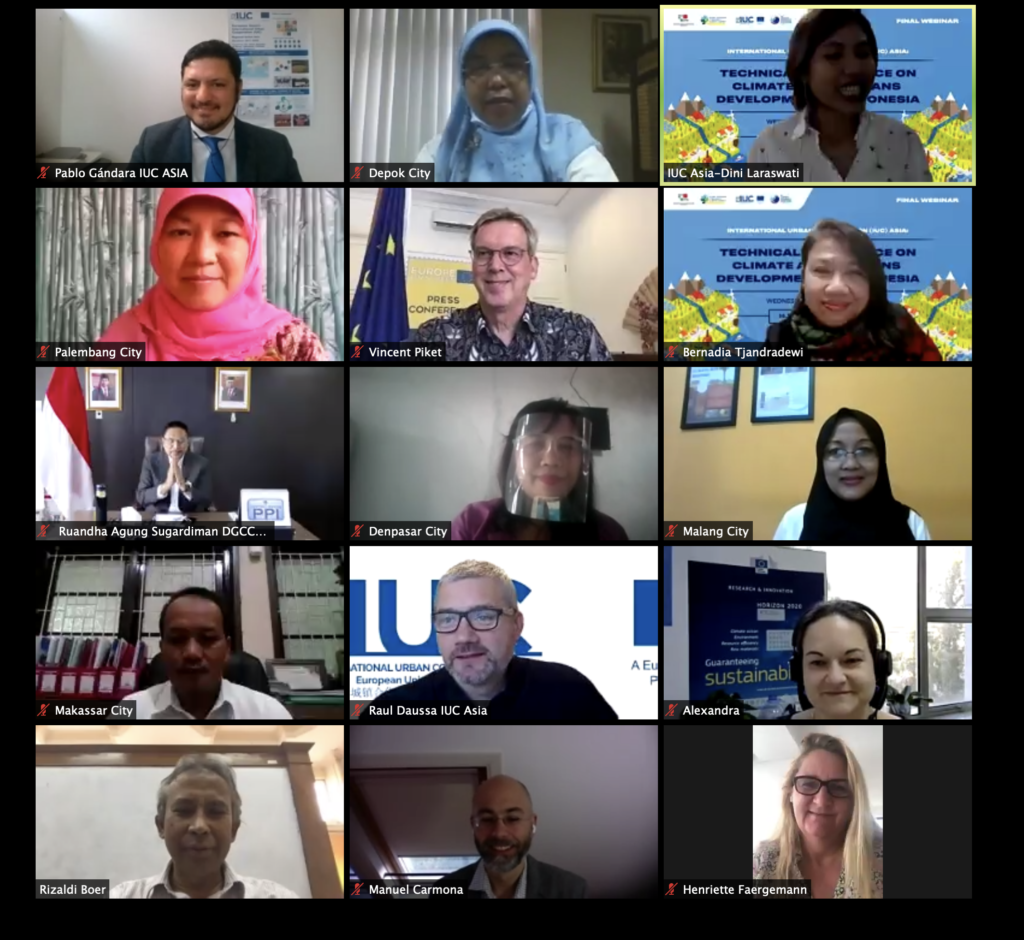 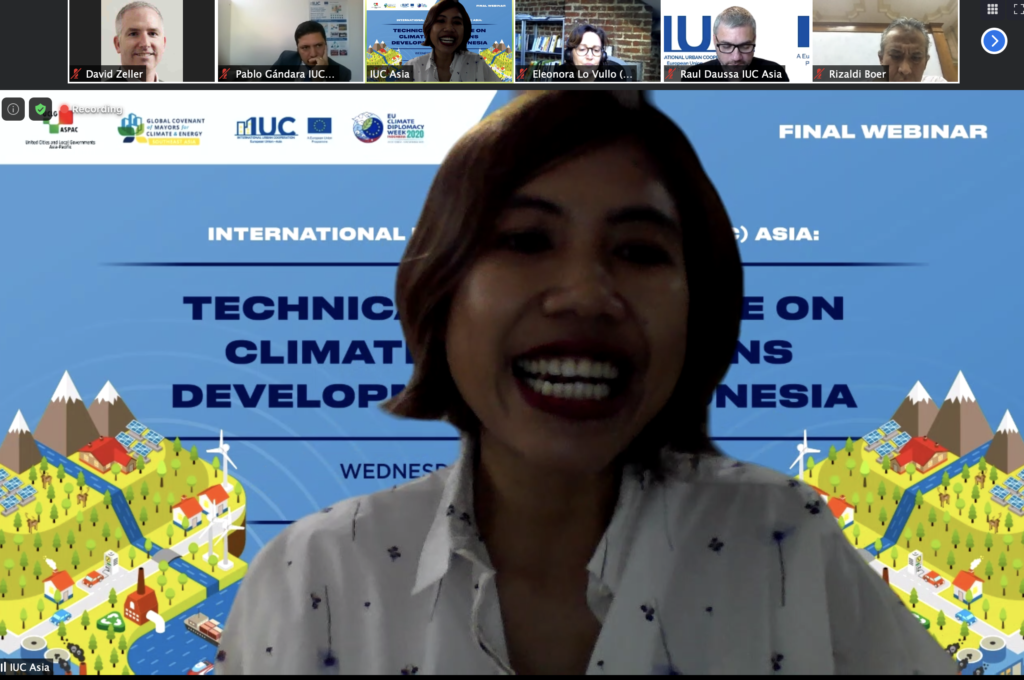