Today, the City of Granada held its second of three webinars on Circular Economy and Blockchain Innovations with more than 25 experts from Europe and China, as part of its pilot project within the IUC Competitive Fund, awarded to Granada.

Today’s webinar was opened with words from Luis Gonzalez Ruiz, First Deputy Mayor of Granada responsible for Economy and Tourism, who stated that “blockchain innovations can contribute to the circular economy, providing a holistic approach to improve the livelihood of the people of Granada. I would like to thank the IUC-Asia team for its support in the initiation of this program on blockchain.” Vito Episcopo, Secretary-General, OnTech Granada Digital Innovation Hub Cluster then followed by expressing how important the circular economy is going to be companies for years to come, greatly benefitted by blockchain technologies.

Raul Daussa, IUC Asia’s Lead Expert for Climate gave the opening keynote on how the Circular Economy is based on biological and technological loops, and what role blockchain technology can play in reducing carbon emissions by 45% utilizing circular economy practices. Professor Qian Ye of Beijing Normal University followed with a second keynote on “Using Blockchain Technology in Risk Governance of Circular Economy Development.” The final keynote was delivered by Dr. Clara Plata of SEMiLLA IPStar presented “how to transfer space technology for Earth based on circular systems with blockchain solutions.”

Gianluca Fabbri, Director Smart City Labs of Rome and Lazio moderated the roundtable session on projects utilizing blockchain technology in research and IUC Asia Pilot City programmes on waste traceability, carbon fingerprint, water management and mobility. Gonzalo Jiménez of the Granada water company Emasagra demonstrated how his company is utilizing blockchain technologies to shift toward the new paradigm of a Biofactory, moving away from the old sewage treatment plant concept, positively contributing to the circular economy. Domenico Barra of ADAMANTIC, a blockchain company from the SmartCity Lab Roma & Lazio, covered the topic of “Solutions of energy Smart Grids, Using IoT and Blockchain.” Kaikai Yang, founder of Dipole Tech unveiled how to enable a consumer to become a prosumer – providing energy to the grid for example – and enter the regional energy market assuming the role of being of a “virtual power plant.” Jing Qian of Rivtower Tech utilizes of blockchain technology in household waste separation, providing a trustworthy tracing feedback loop related to a credit record for the participating consumer.

Summarizing today’s IUC Asia webinar on Circular Economy and Blockchain Innovations, Francisco Benitez, Coordinator of the Blockchain Webinar Series on behalf of Granada, explains how blockchain can be a disruptor for IoT technologies. “In Granada, we will launch a platform in about a month for companies, researches and entrepreneurs to collaborate, to use as a sort of sandbox, to test blockchain projects before they go to market.” This platform will be launched in the medialab of the Univ of Granada, Spain.
The meeting – moderated by IUC expert Wang Qian – was summarised by IUC staff Pablo Gándara and Raul Daussa, who thanked all participants involved and offered an open invitation for interested parties to join the IUC community.

The City of Granada was granted the competitive award of the IUC Asia project. The project selected aims:

The webinar series presents the main challenges that blockchain technology represents for cities and debates how to cooperate in order to find common solutions and/or the exchange of information or research in joint venture projects. The idea is to show the actual framework and state-of-the-art of blockchain in the participating cities. 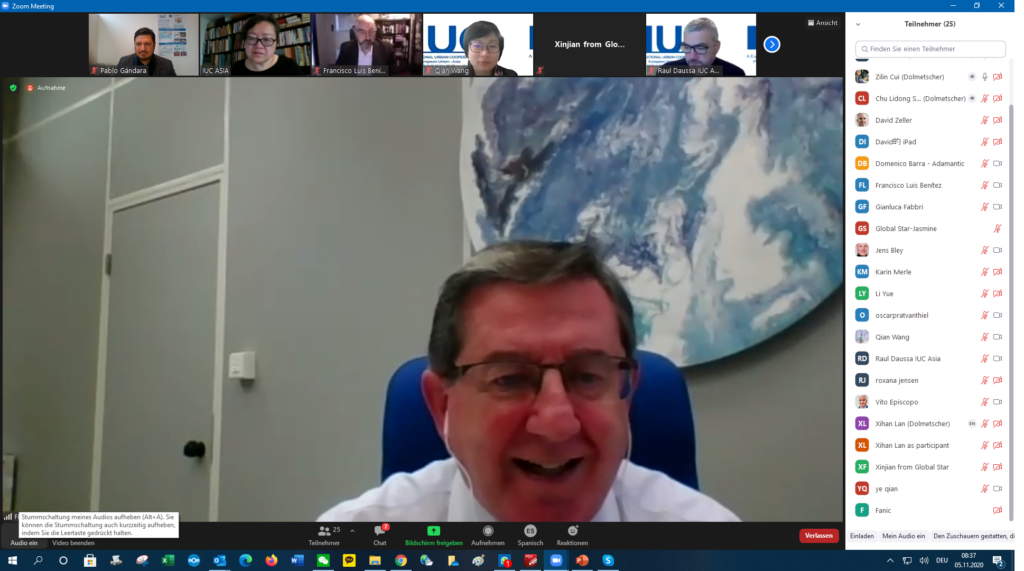 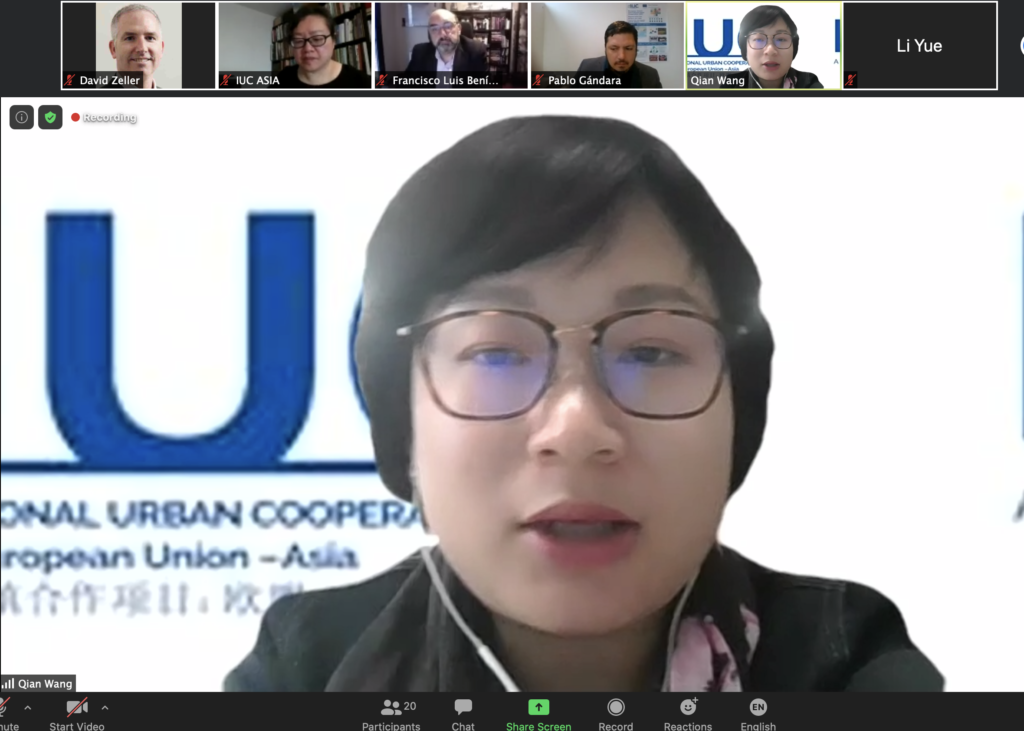 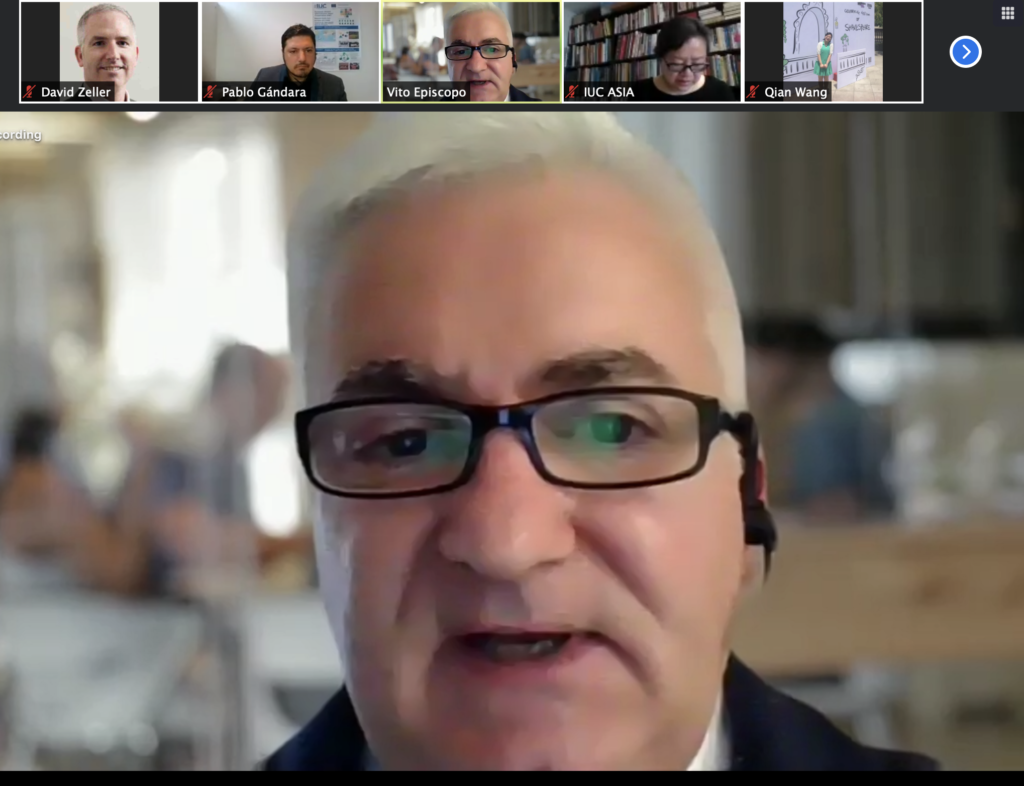 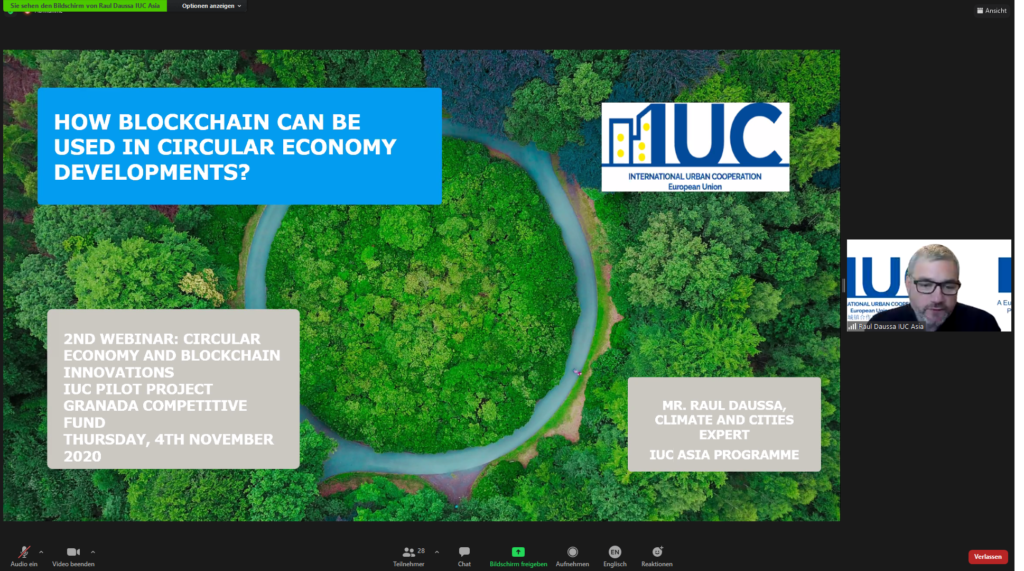 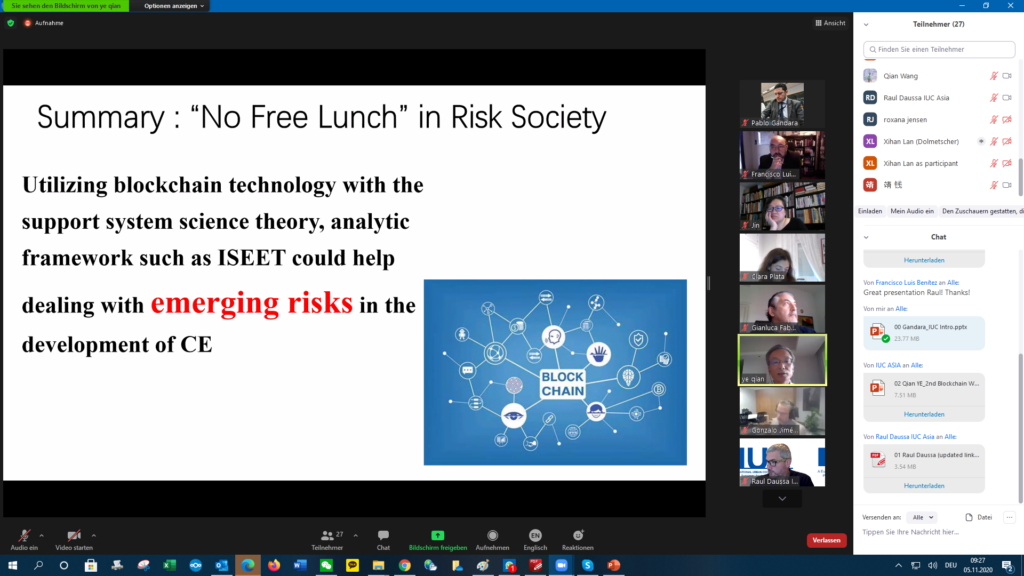 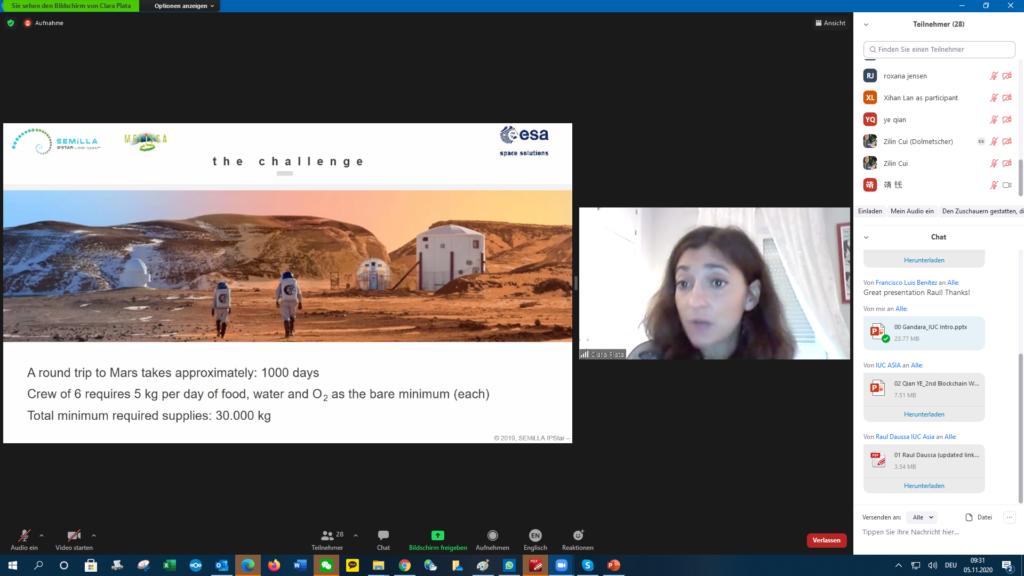 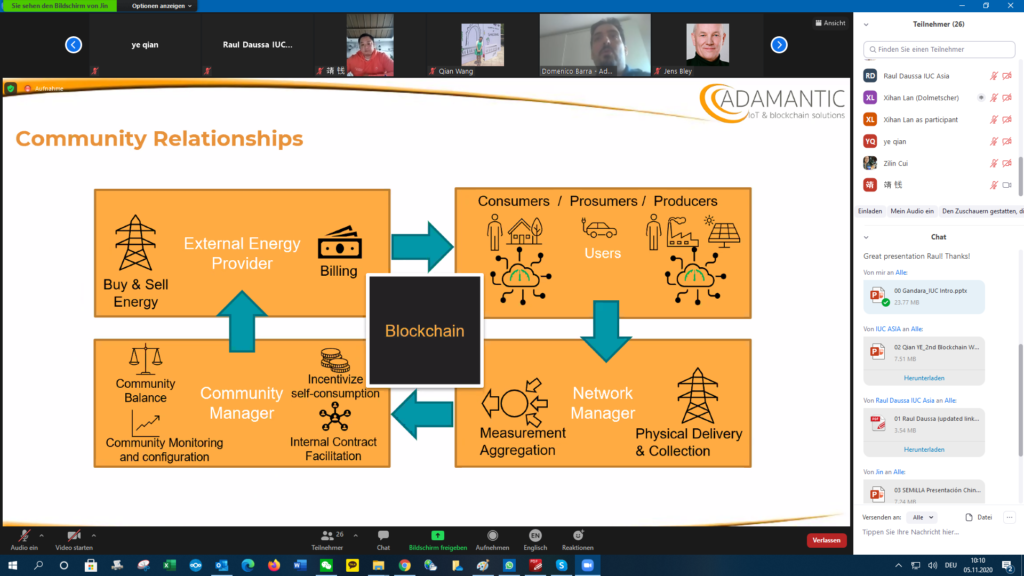 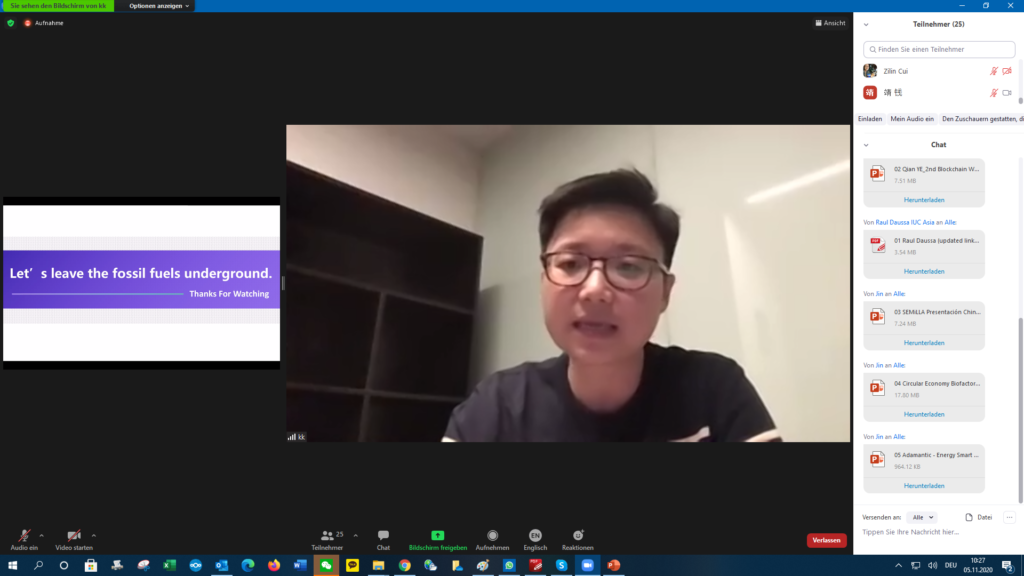 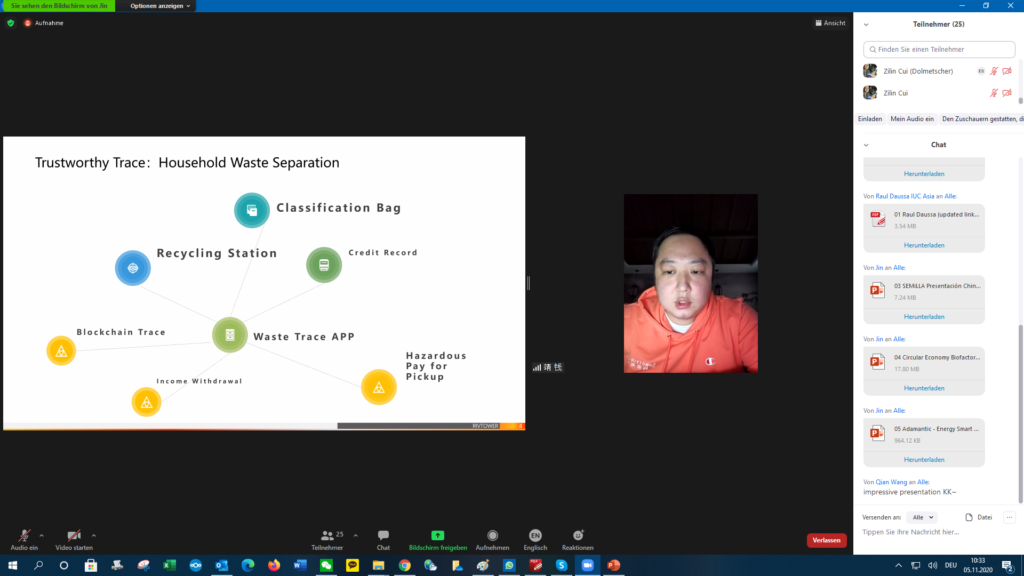 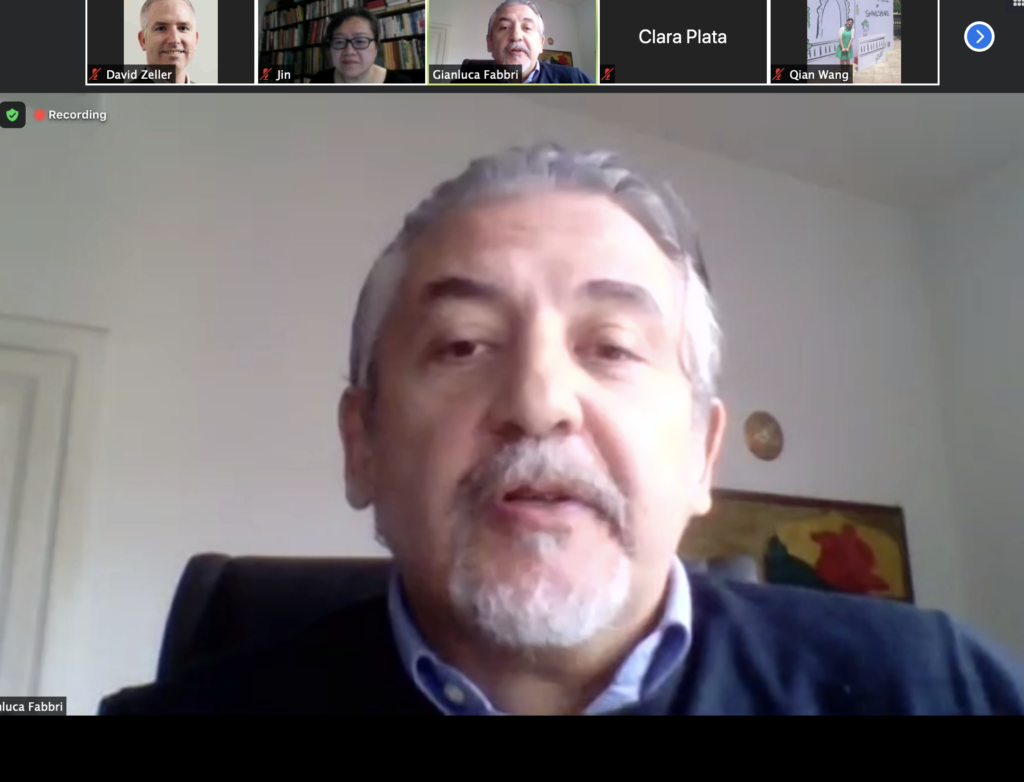 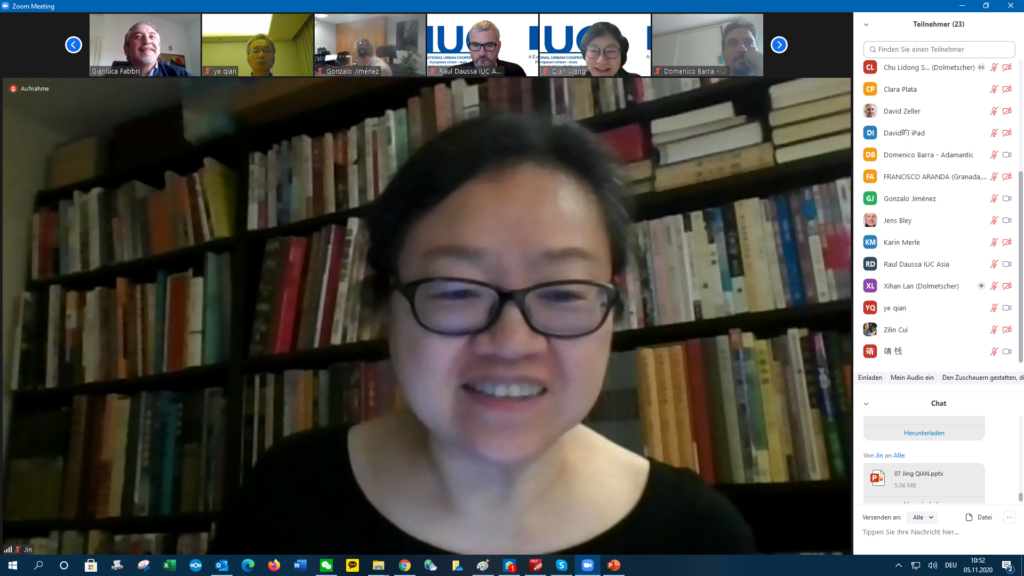 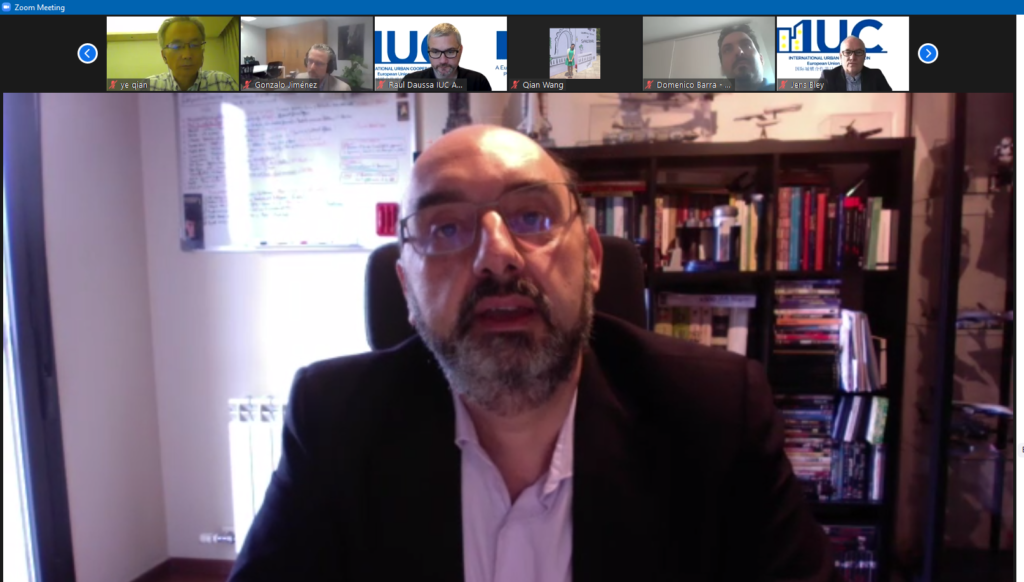