The IUC team co-organised the webinar “International cooperation for innovation in urban development policy and practice: results and perspectives from EU – Asia Cooperation“. The event – which involved over 60 experts from Europe and Asia – was held within the European Week of Regions and Cities, the EU Commission’s flagship annual event on urban and regional development.

The video of the webinar is available here: https://euregionsweek2020-video.eu/video/international-urban-cooperation

At the event, selected results of the city-to-city cooperation were discussed, especially with regard to the added value for the public authorities and the private sector. Speakers from Asia and Europe participated in two thematic discussions on Smart Cities and the Green Deal, and made recommendations for the future. A special emphasis was placed on the effects of the Covid19-crisis to the respective cities’ actions as well as to the international cooperation capacity. The session was complemented with a presentation by the IUC Methodology Taskforce (MTF) on lessons learned and recommendations for future city-to-city cooperation.

In his opening speech, Rudolf Niessler – Principal Advisor at DG REGIO – said that that 37 cities from China, India, Japan and Malaysia have been involved in IUC phase 1 and remarkable achievements have been achieved in areas like circular economy, connectivity, smart city, silver economy, renewable energy and urban planning. With regard to the COVID crisis, he said “(…) the IUC project offers a very good framework to deal with complex issues such as the COVID crisis at local level. Since the outbreak of the pandemics, the IUC regional teams have implemented several online exchange sessions between European and non-European pilot cities. It was inspiring to witness the great willingness and commitment of cities to stand together, help each other and act as real friends and partners“.

Nelson Jorge, Team Leader at the Partnership Instrument of the European Union’s Foreign Policy Instruments (FPI) stated that – from 2021 onwards – the IUC project will evolve to the IURC – a programme with a stronger focus on city thematic networks and region-to-region cooperation in the field of innovation. Mr. Jorge invited cities from Europe and Asia to engage in the new programme and referred to some results achieved within the 80+ city pairings. He also referred to the added value of cross-regional, cross-national learning and the timely lessons learned from cities that have implemented measures to combat the effects of the COVID pandemic.

One of the most interesting new projects discussed was the concrete Barcelona-Liuzhou cooperation project on strategic planning for Liudong New Area. Here, urban planning experts from Barcelona have been invited to support the conceptual development of two plots with over 100 hectares. Barcelona City Council – led by Municipal Urban Planning Institute (IMU) – is involving the Polytechnic University of Catalonia (Barcelona School of Architecture – ETSAB) as well as GINA Barcelona Architects, the global brand grouping the most prestigious architectural firms from Barcelona. Bettina Stollar from the Barcelona Asia-Pacific Programme at Barcelona City Council said “The Chinese cities have optimised construction development making this process faster and more agile. Their experience could serve as a testbed to apply innovative urban solutions in the future development of the 22@Liudong New Area“. She also stated that the IUC offers an exceptional chance for European and Asian cities to meet, engage, exchange and form partnerships accompanied by institutional and expert backing. Ms. Stollar added that – as a global programme – during the IUC annual events, Barcelona was able to interact with peers from other world regions. In the next phase (IURC) a stronger focus on thematic global / cross-regional networks – with flagship projects – would offer unique chances to achieve a global impact on urban sustainability issues, she said.

Dominique LI and Fanic ZENG from Guangzhou Development District (GDD) explained engagement activities deployed since November 2013, as it was recognized by the National Development and Reform Commission (NDRC) & the European Commission as the first pilot area for EU-China Regional Policy Cooperation. GDD has participated in 20 EU-China cooperation & exchange activities, including 6 visits to Europe. Within the IUC, GDD is now focusing on industrial design cooperation as well as on biotechnology and smart city. Mr. LI stated that the GDD will actively participate in the new IURC programme, planning to set up offshore incubation centers/offices as well as to strive for concrete cooperation on technological innovation and technical talent exchange. He recommended to jointly define the new IURC’s objectives, working schedule and contents. GDD wishes to establish a communication platform to meet – online and onsite – more regularly. Ms. ZENG proposed IURC to issue an official certificate or plaque to each city partner to achieve better visibility.

Representatives from Chengdu explained the energy transition happening in Sichuan province, especially in the Luxizhigu Area of Chengdu, which is currently developing the world’s first “Park City“. Here, energy consumption per unit of GDP is reduced by 25% compared to 2020 and renewable energy accounts for the proportion of terminal energy consumption ≥35%. The park city’s greening target reaches the urban area ≥50% and the proportion of blue-green space ≥75%.  Mr Yi LIU – Deputy Director at Sichuan’s Energy Internet Research Institute (EIRI) – referred to the MoU to be signed with Rome Sapienza University and Manchester Metropolitan University, which would launch joint research and academic exchange programmes, as well as incubation activities for start-ups and students. He invited further European cities to engage with EIRI at the upcoming 2020 Energy Internet International Innovation & Entrepreneurship Summit starting on 16 October 2020.

The EU-India cooperation was showcased by Sanjit Rodrigues, Municipal Commissioner of the Corporation Panaji in Goa. Mr. Rodrigues referred to the smart parking pilot project under implementation with support from Dubrovnik (Croatia). The project has included several phases including the review of the current parking status in Panaji, the assessment of key technologies in India/EU, and the review of potential funding sources for smart city technologies. Mr. Rodrigues reflected on the importance of best practices exchanges on mobility/smart city with Dubrovnik and other European cities. He asked the IUC team to provide updated information on funding opportunities for developing practical smart parking solutions. Panaji looks forward to participation in the follow-up IURC from 2021 onwards, he said.

Cooperation on urban development between the EU and Japan was presented by Yohei Watanabe, Chief of the Business Creation Division of Koriyama City. He explained the cooperation with Essen (Germany) on urban resilience, energy transition & open innovation. Areas of cooperation include knowledge transfer on renewable energy as one of the main drivers for the Green Deal and water management (climate resilience, rainwater and sewer management). He said that there is an impending need to enhance resilience & disaster-preparedness. Also, possibilities to collaborate on clean energy resources, e.g. the utilization of hydrogen, should be explored. He mentioned that one of the key takeaways from the study tour to Essen (Stadtwerke) in Aug. 2019 was the attempt to maximize the utilization of local renewable energy sources and to realize a ‘circulating and ecological economy’. This has inspired Koriyama to establish new local power producers and suppliers’ structure. With regard to the COVID-pandemics, children in Koriyama joined the ‘Symbol of cross-national solidarity’ project to share a sense of unity, empathy and encouragement against COVID-19 with Essen in May 2020.

Patrick Maurelli from Rome’s CITERA Centre at Sapienza University referred to the cooperation with China and Malaysia in three areas: 1) smart energy districts, 2) circular economy of buildings, and 3) urban agriculture and collective gardens. Along with the Municipality of Rome and the Renewable Energy Association FREE, CITERA pilot projects with Asian cities include the development of energy management and deep retrofitting solutions, the development of Near Zero Energy Buildings and Positive Energy Districts models as well as Digital Twins (GIS/BIM) for innovative design and planning workflow. CITERA is also working with the Chinese cities of Yantai and Liuzhou on the age-friendly building design & certification guidelines, as well as on cultural heritage restoration models through digital tools. Alike Barcelona and Bologna, Rome will participate at Yangzhou’s Horticultural Exhibition 2021 with an own garden pavilion already designed.

Sandra Marín from the IUC Methodolofgy Taskforce introduced the thematic networking approach proposed for the upcoming IURC programme. She said that it is proposed for all IURC regions to organise thematic networking events & webinars with relevant cities and stakeholders involving new cities & current IUC cities. According to the EU, the next period will capitalise on existing regional experiences to create a global impact.

The session was moderated by the IUC regional team leaders Hidefumi Imura (IUC Japan), Panagiotis Karamanos (IUC India) and Pablo Gándara (IUC Asia). They referred to the results/potentials of city-to-city cooperation in the Smart City and Green Deal areas. They also showed resources provided by the different regional teams as well as by the Brussels-based project support unit, including an overview publication of city-to-city achievements published in June 2020.

Further details of the speeches can be downloaded below. 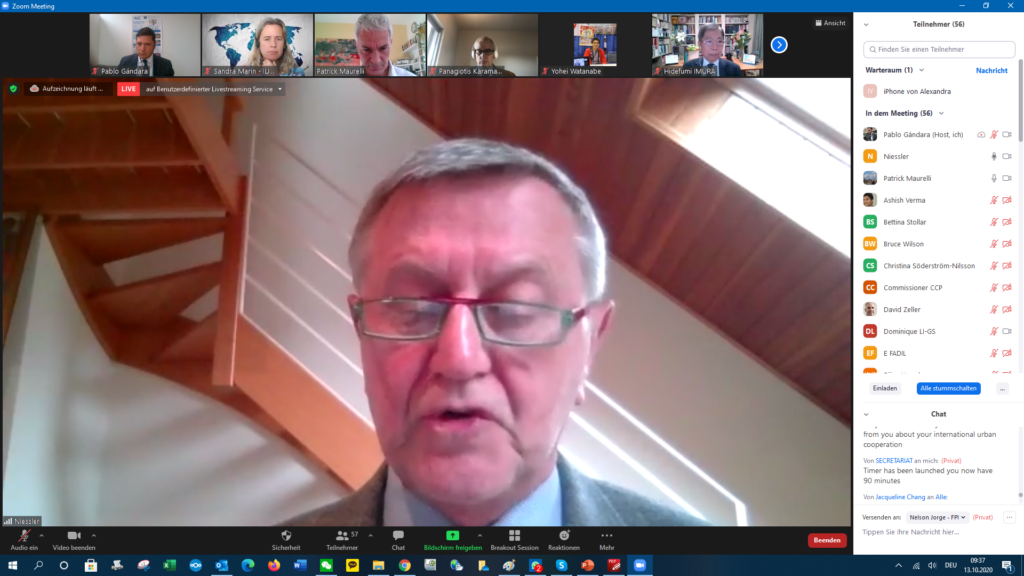 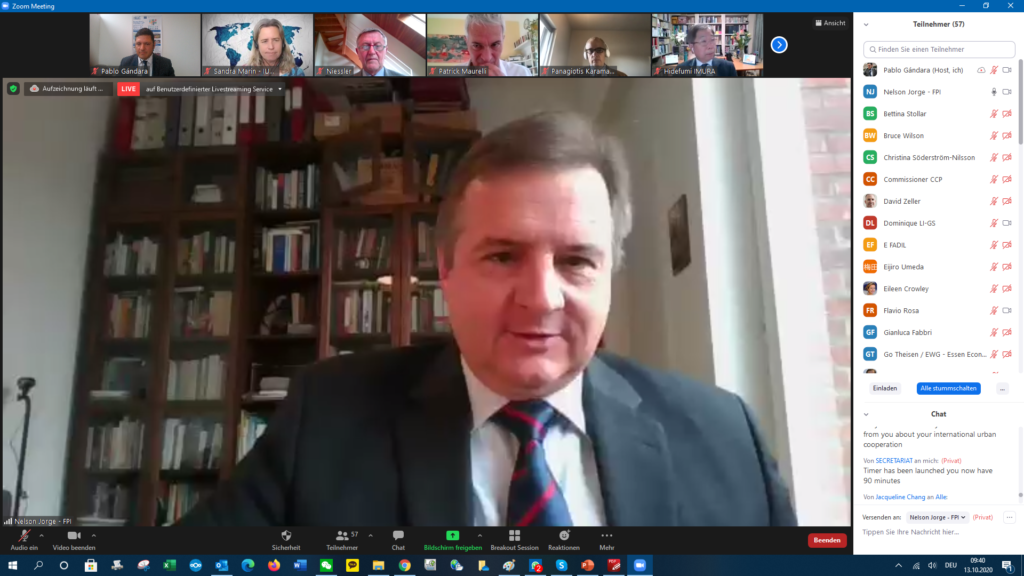 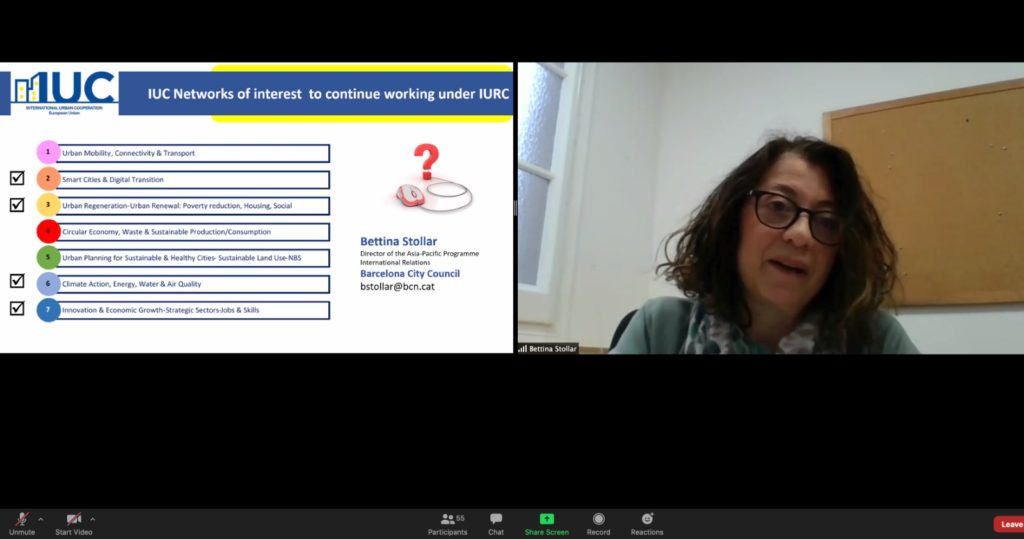 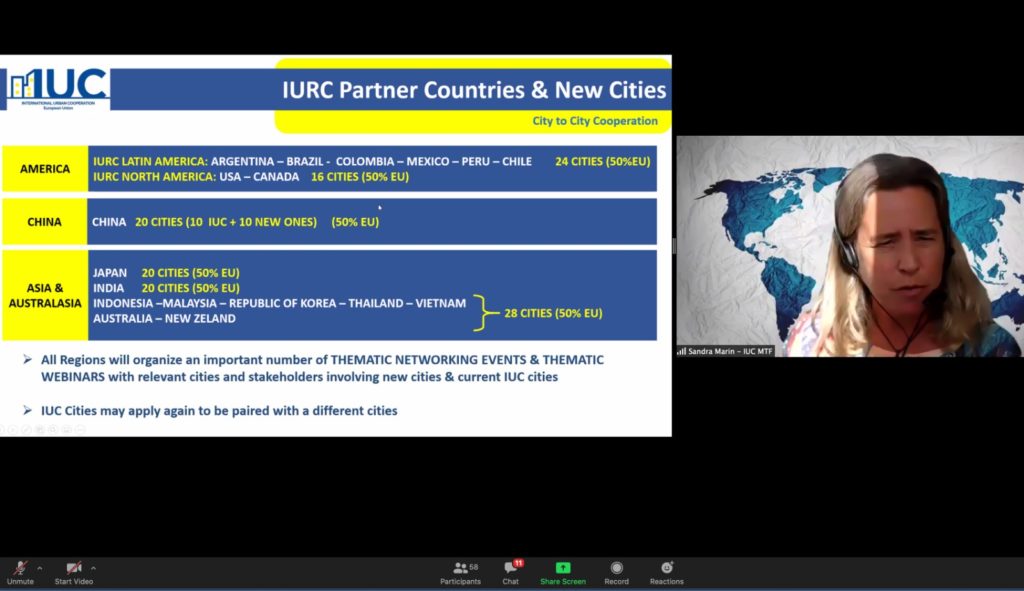 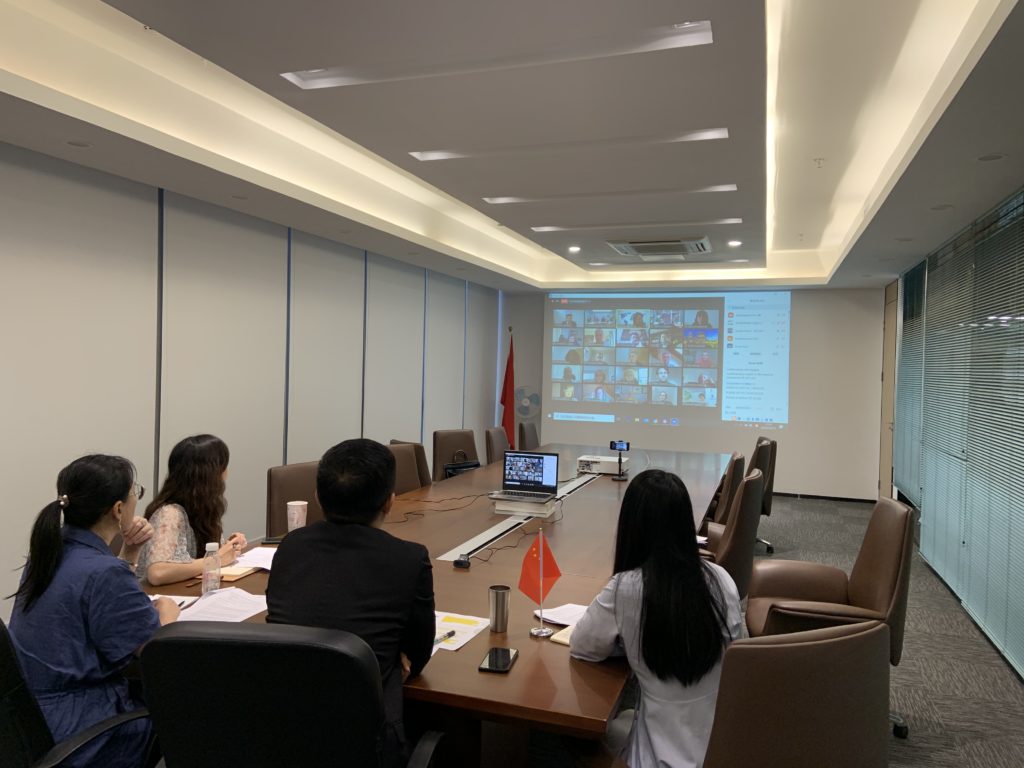 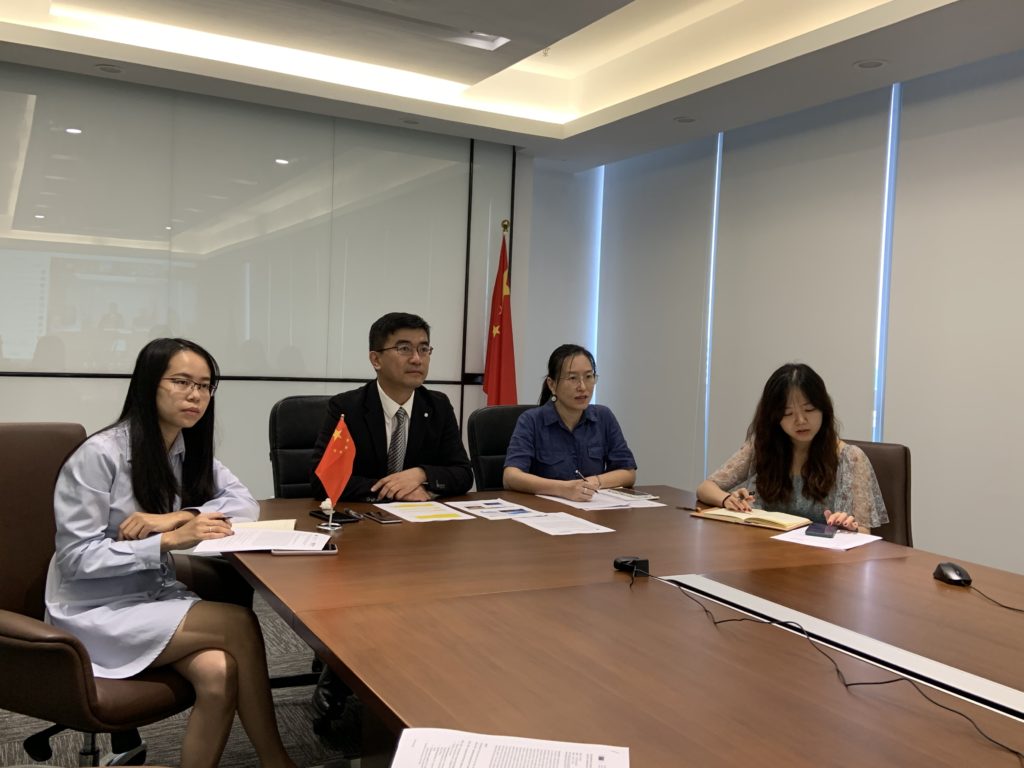 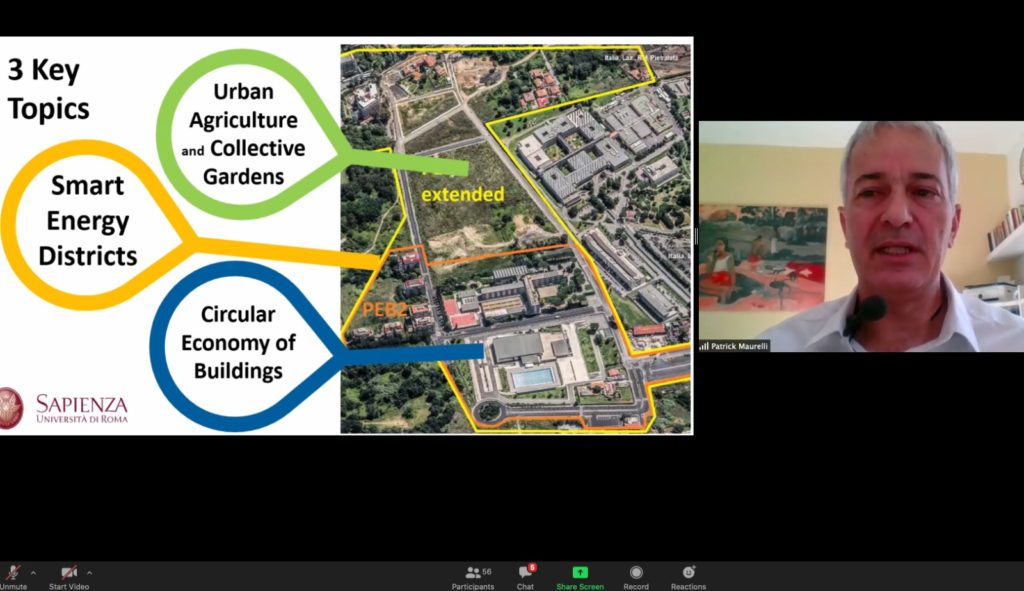 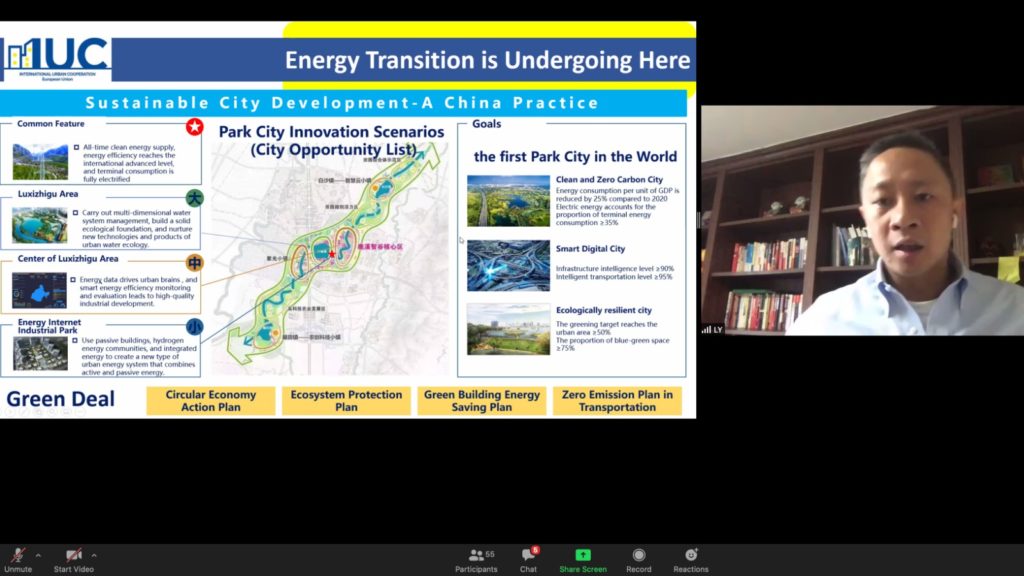 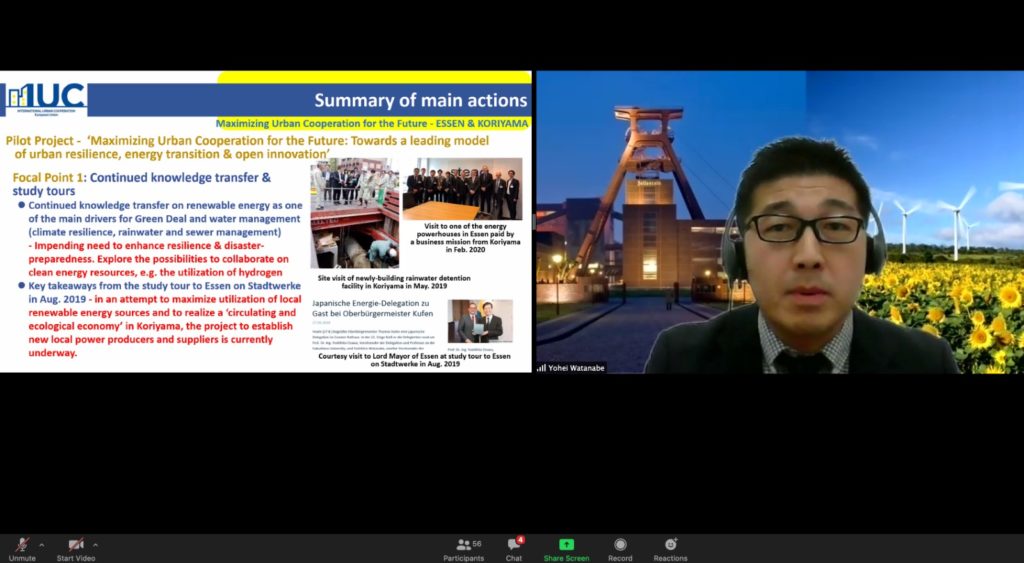 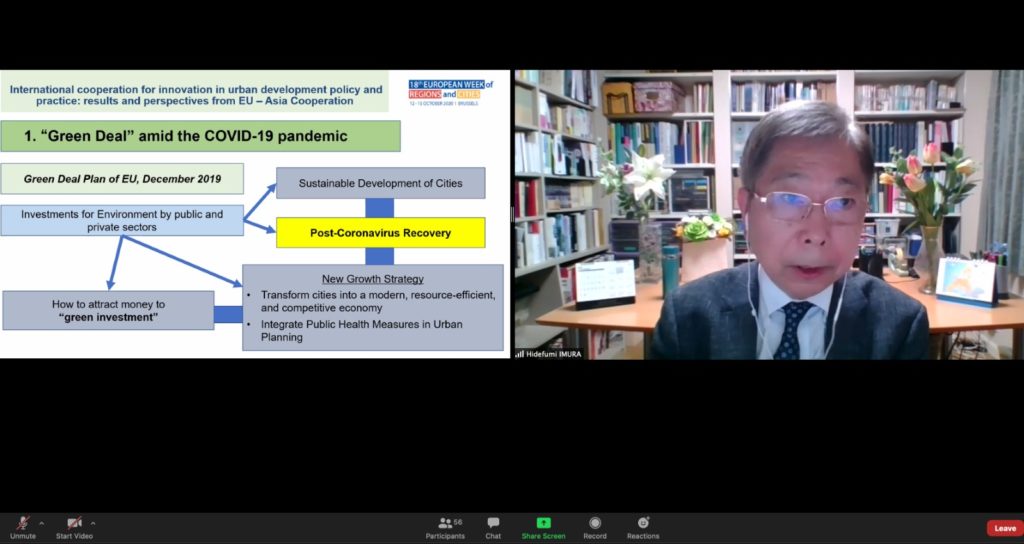 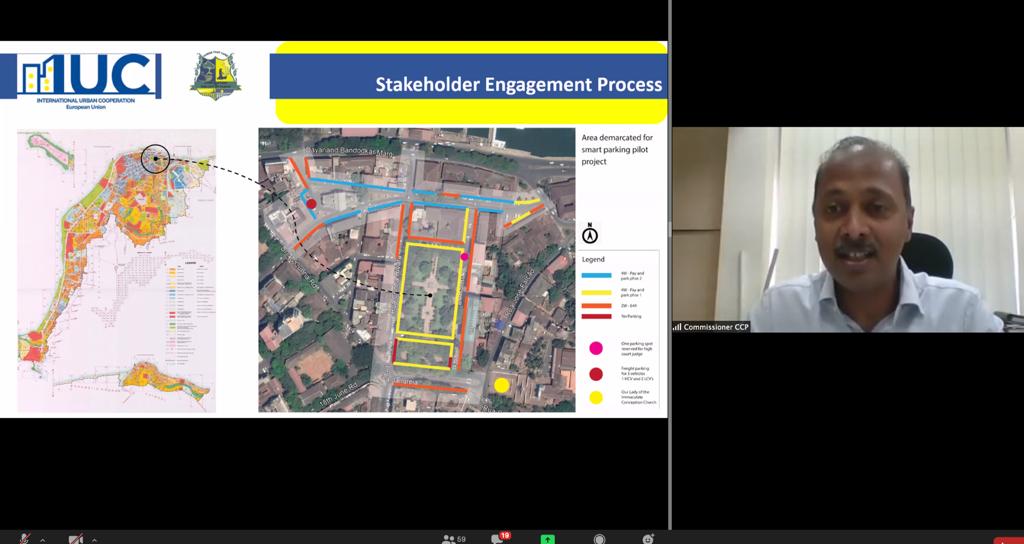 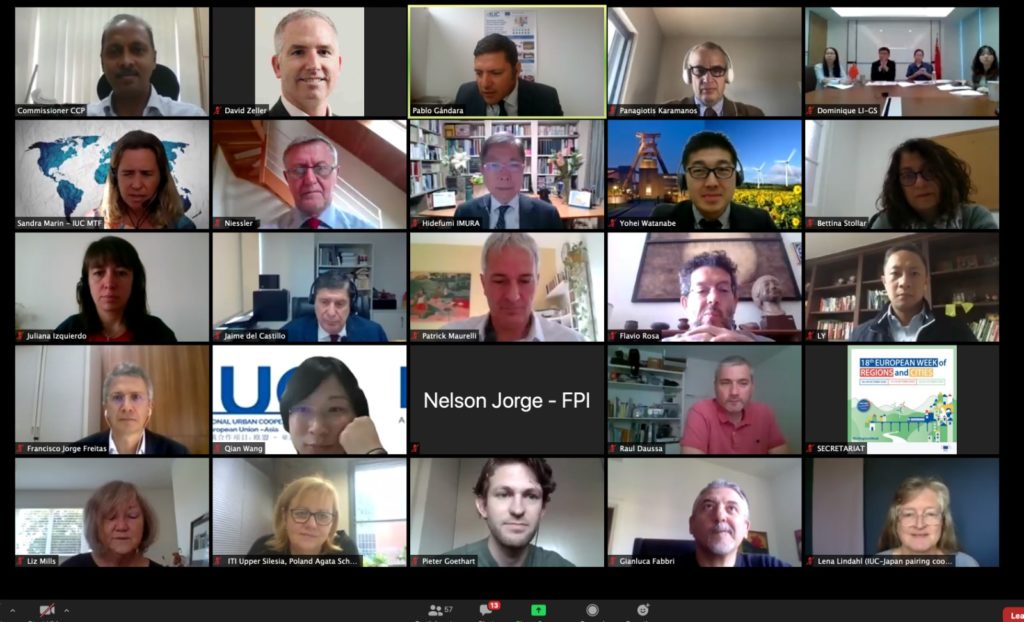 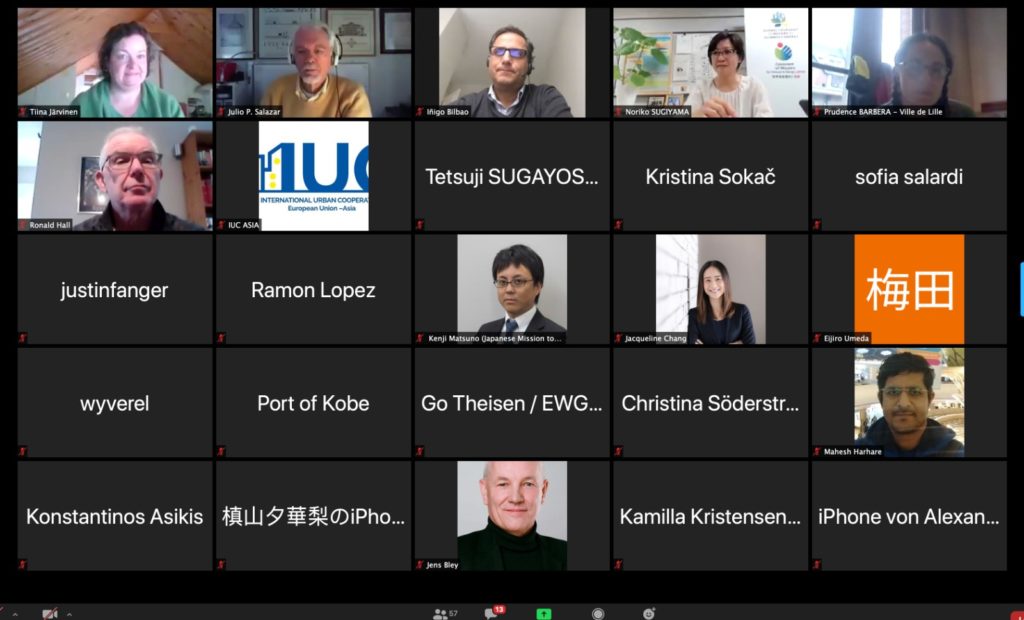 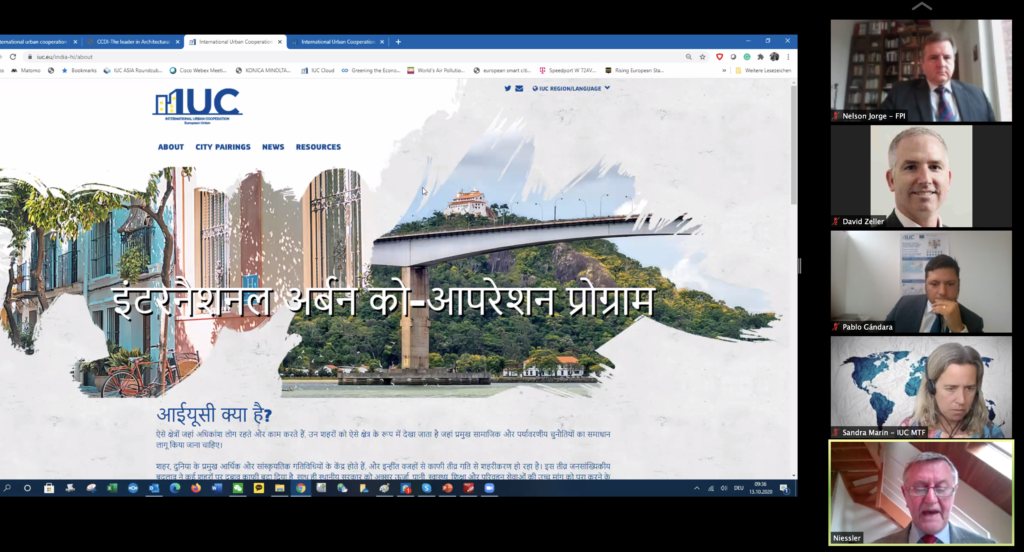 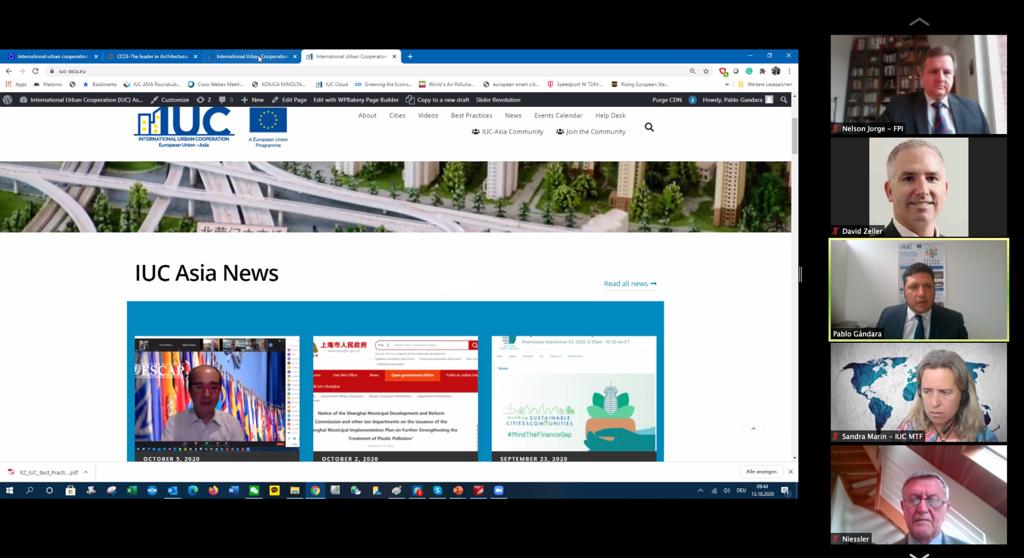