Today the IUC Asia programme held its final webinar on climate action planning at the local level in Vietnam. Since February 2020, the IUC Asia programme of the European Union has been providing technical assistance and support to three pilot cities in Vietnam (Can Tho, Da Nang, Tam Ky) for the development of their Climate Action Plans (CAPs) that are in line with Global Covenant of Mayors’ Common Reporting Framework (GCoM CRF). The technical assistance is being implemented through the cooperation with the UN Habitat and CDP as the technical partners.

The CAP development in these three pilot cities has arrived at the finish line and Vietnam showcased the pilot cities’ CAPs that they have developed throughout the IUC Asia programme. Reflections and discussions about the challenges and lesson-learned, especially for future EU cooperation, along with a review of the progress from IUC Asia’s last mid-term monitoring were held today. In the future, these CAPs as well as the development process within the IUC Asia programme, will become references for replication in other cities in Vietnam and the Asian region.

Actions from Vietnam cities and urban centers are crucial to achieving the national and global targets for climate change. Accelerating urbanization presents challenges to Vietnamese cities, in particularly secondary ones, as they struggle to support sustainable, inclusive economic growth and remain resilient. Cities are major drivers of economic development and growth in Vietnam, as about 70% of GDP is generated in urban areas while it is expected that until 2040, about 50% of Vietnam’s population will live in urban areas. Therefore, climate actions in Vietnam cities are crucial since (1) approximate 75% of the urban population in Vietnam are living in low-elevation coastal zones, and (2) the changing lifestyle and carbon-intensive energy mix may increase the GHG emission per capita of 3.5 tonnes CO2e to ten-fold consistent to the projected 10 times GDP growth rate increase from 2010-2050.

The webinar began with opening words from Rui Ludovino, Policy Officer of the EU Delegation to Vietnam, highlighting the important work done under the technical assistance of the EU IUC Asia programme with the Ministry of Natural Resources and Environment (MONRE) of Vietnam, in partnership with UN Habitat and the CDP.  He stated, “Climate Change is at the top of the EU agenda. The EU recently adopted the European Green Deal, as the new growth strategy for Europe. The Green deal puts the efficient use of resources at the heart of our recovery. The Green Deal will rethink and modify all aspects of the European economy and society towards achieving the target of zero net emissions by 2050.”

Mr Ludovino further stressed, “We take climate change seriously and want to work closely with Vietnam to also mitigate, adapt and build resilience to climate changes. In this sense the work carried out under IUC, and in particular the efforts the EU makes to extend the Global Covenant of Mayor for Energy and Climate (GCoM) to as many cities and countries as possible is important. It is cities which are at the heart of the fight on climate change and they are the best placed to accelerate the reduction of emissions in many sectors as well as increase preparation to resist and overcome climate change. The recent floods in Vietnam have shown how important it is to have a plan and measures in place – imagine what it could be if we also built elements that reduce risks and use resources efficiently when we plan the urban development of our cities. This is why the work on Climate Action Plans is so important. In this sense, the EU will make available resources under the GCoM to support cities in their Climate Action Plans from 2021 until 2024.“

Pham Van Tan, Deputy Director of Dept. of Climate Change at the Ministry of Natural Resources and Environment (MONRE) provided welcoming remarks from the Vietnamese side. Vietnam is one of the highly affected countries by climate change, he said. As Mr Tan stated, the Government has developed many measures, not only contributing to the global effort on responding to climate change, but also contributing to the sustainable development of the country. “The cooperation of the European Union and UN-Habitat in developing climate action plans for cities within the framework of the GCoM and the IUC Asia programme is vital and highly appreciated. Can Tho, Da Nang and Tam Ky are the three selected pilot cities for the CAP development following the guidance of the Ministry of Natural Resources and Environment (MONRE), while also using the UN-Habitat process of assisting cities in the Southeast Asia region and complying with the GCoM Common Reporting Framework (CRF)” – Mr Tan said. He also stressed that Vietnam’s NDCs have been updated and submitted to the UNFCCC in September 2020. The implementation of the Paris Agreement in general, and the country’s NDCs, in particular, has been integrated into the revised Law on Environmental Protection. In the revised Law, there is one chapter for climate change, and the contents on NDC implementation are clearly specified. “In all probability, Vietnam is the first developing country in the world which incorporates the commitments of NDC into the Law” – Mr Tan said. According to the updated NDCs, Vietnam will have reduced its GHG emissions by 9% compared to the BAU scenario by 2030 with its own domestic resources. “This contribution can be raised up to 27% with international support through bilateral as well as multilateral cooperation and the implementation of new mechanisms under the Paris Agreement” (Report to UNFCCC, p4)

Paolo Bertoldi, Senior Expert at the EU Joint Research Centre (JRC), explained the benefits of CAPs. He stressed the need for cities to provide a solid data collection, a task that is supported by the JRC within the EU’s support to the implementation of the Global Covenant of Mayors for Climate and Energy. Mr Bertoldi emphasised the importance of setting clear targets for mitigation of CO2 emissions as well as for the adaptation to climate change. “Building partnerships with citizens and business is crucial for cities to achieving long term results on climate action” – he said. The JRC has supported IUC’s climate action planning in Vietnam through an onsite training session in Hanoi (2018) as well as through several virtual coachings.

Maria Adelaida Antonette of UN-Habitat and Hanah Paik from CDP delivered key messages and lessons learned from developing CAPs in Vietnam. Ms Antonette explained the making of baseline emission inventories (BEIs) and risks vulnerability assessments (RVAs) in the three Vietnamese pilot cities and emphasised the validation process involving several departments. They referred to facilitating factors for climate action planning, including a strong climate change National Target Programme by the central government, the leadership’s commitment to the CAP process at the local level and the establishment of Task Force Groups for data sharing/validation as well as for cross-sectoral analysis. The availability/sourcing of data for the GHGI and CRVA remain challenges, they said. “COVID-19 impacts limited and challenged the conduct of the training and data gathering, but also limited the interaction and cross-sectoral cooperation during the CAP process. COVID-19 created new priorities and scenario on engagement” – Ms Antonettte said. She stressed that vertical integration (City/Province/Ministry) must be part of the process to address the data and information gaps faced by the cities. Ms Antonette the possible replication of the IUC / GCoM CAP to more cities in Vietnam.

Dinh Diep Anh Tuan (Dragon Institute and Department of Natural Resources and Environment – DONRE) of Can Tho City explains, “Climate actions in our cities are crucial since an approximate 75% of the urban population in Vietnam are living in low-elevation coastal zones.” Mr. Tuan introduced the meetings the DONRE organised with a group of local agencies in Can Tho city to discuss the CRVA, the GHG inventory, targets and proposed actions. He presented CanThos’ adaptation goals for infrastructure and land-use in order to void damages caused by severe floods. Actions planned within the CAP-processs include the protection of the natural canals within the core area of the city, building an early warning for high tide and investing in dyke construction at vulnerable locations.

Nguyen Thi Kim Ha (Department of Natural Resources and Environment – DONRE) of Da Nang City presented adaptation goals, such as improving road drainage & water supply infrastructures to address the impacts of climate change, improving capacity to mitigate risks from flooding, improving land-use management. Ms Ha emphasised the importance of improving the knowledge and overall capacity to mitigate risks for agriculture, tourism, construction and urban management at the district and ward levels. Concrete actions foreseen to mitigating CO2 emissions include propagating and guiding energy efficiency in daily-life activities, households, and city service establishments, as well as changing existing buses to new ones that meet Euro emission standards. Ms Ha referred to the next steps of DaNang City, including data update & management, consultation meetings in the city’s sectors and district levels to validate the needs and relevance of the proposed adaptation and mitigation actions as well as the submission of the CAP to Da Nang PC for participating and become a member of the GCOM.

Le Ngoc Phu (Department of Natural Resources & Environment – DONRE) of Tam Ky City presents potential mitigation action targets for the CAP such as > 5% reduction of energy consumption, > 10% increase of public transport, > 5% water loss reduction, and > separation waste & minimising plastic waste. With regard to adaptation, Mr Phu referred to strengthening the adaptive capacity of communities and households (especially infants and elderly people and street workers), particularly in flood-prone areas. He also stressed the importance of including climate resilience in the land use planning for urban agriculture as well as to increasing green areas in the city. Alike in Danang, TamKy’s DONRE will arrange data and review validation meetings and will ensure that the proposed actions are consistent with the new socio-economic development plan for 2021-2030 and the provincial action plan responding to climate change. Quang Nam will soon submit the CAP to the PC for becoming a member of the GCOM – Mr Phu said.

In their closing words, Pablo Gándara and Raul Daussa from the IUC Asia team emphasised the importance of cooperating with other international partners (e.g. 100 Resilient Cities programme, ADB, etc.) and expressed their acknowledgment to the three Vietnamese pilot cities for the achieved climate action planning in times of COVID-19 restrictions. They also expressed their gratitude to the EU Delegation in Vietnam, the EU’s Joint Research Centre and Foreign Policy Instruments, the Vietnamese Ministry of Natural Resources and Environment, UN Habitat and CDP for supporting the IUC Asia programme activities in Vietnam within the Global Covenant of Mayors for Climate and Energy initiative. 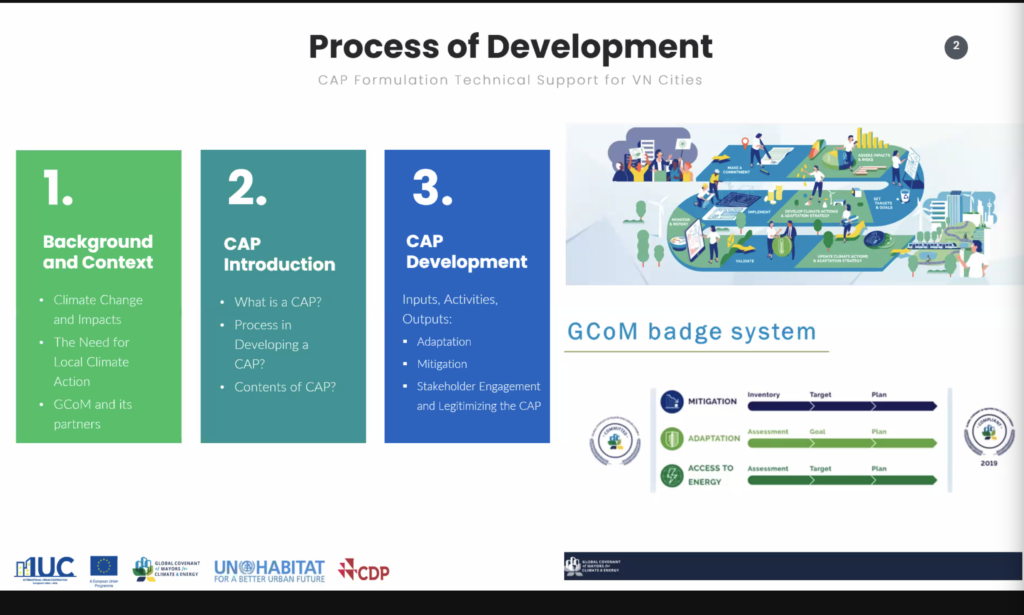 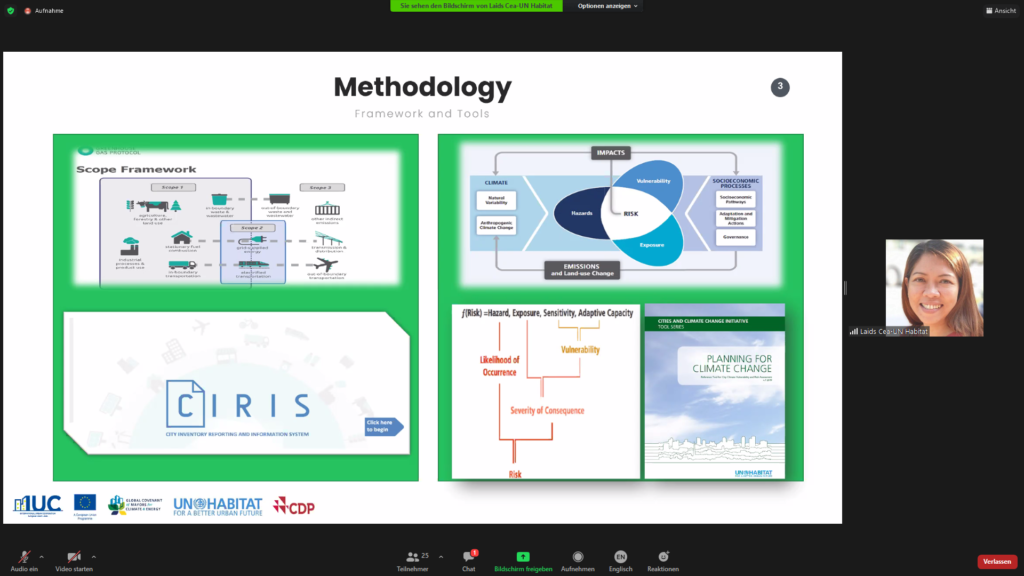 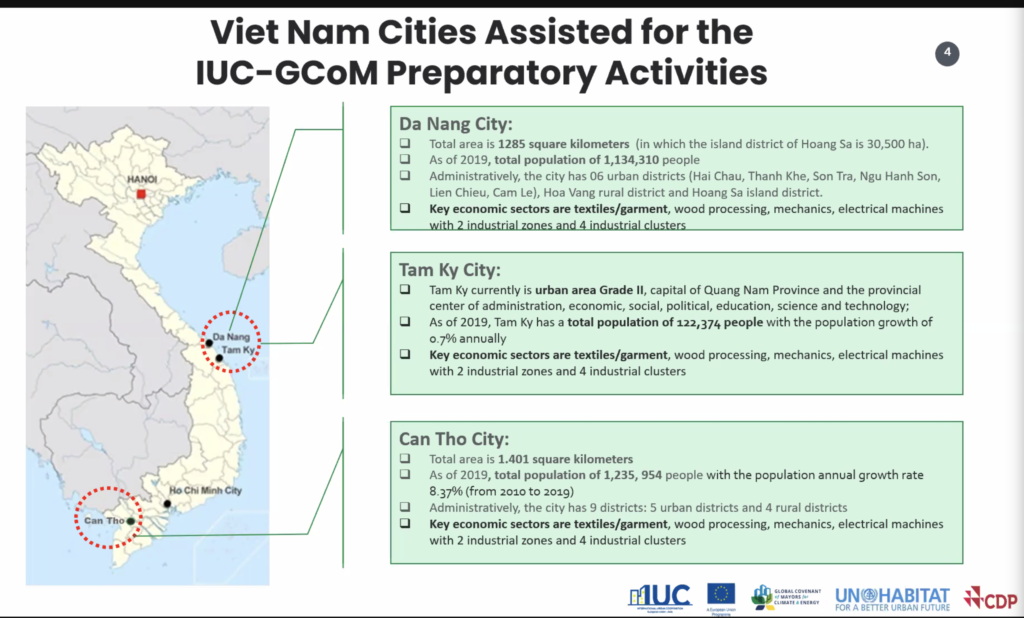 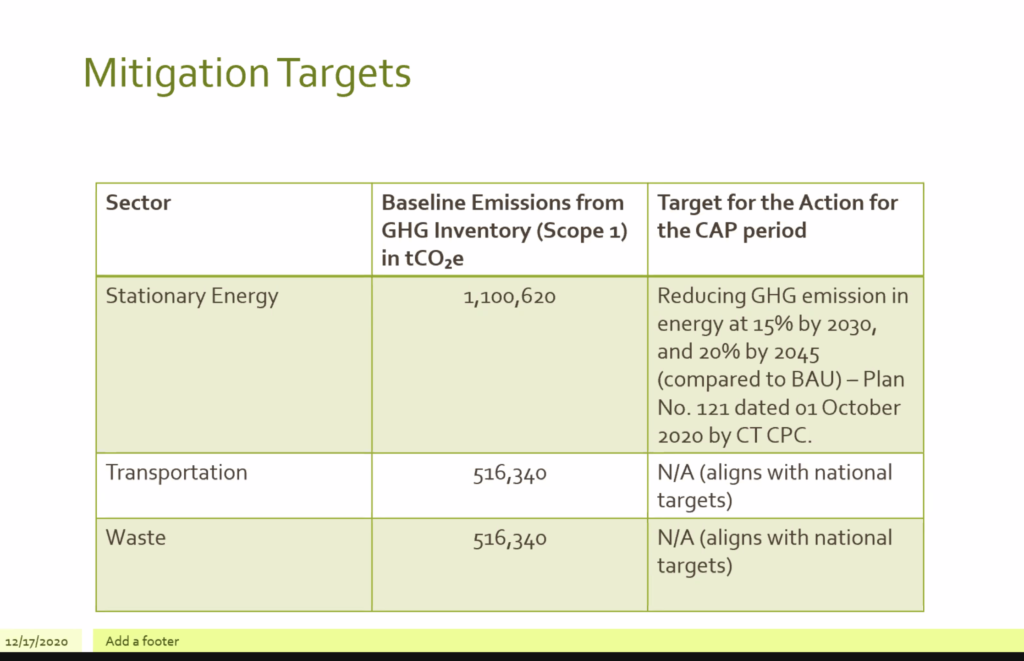 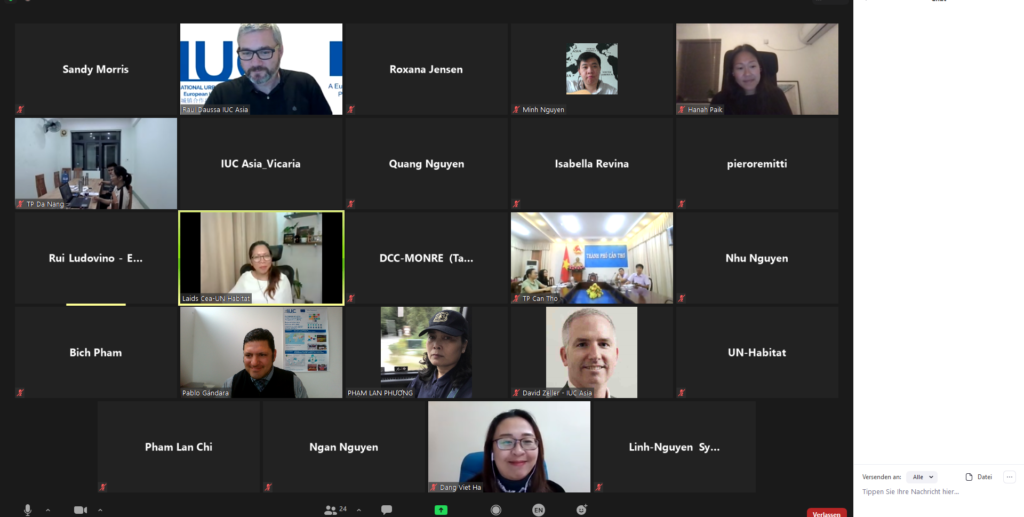